Here is the Hard Space work-in-progress map. It uses my Near Space map as a baseline and the world's physical stats are identical to those of Near Space.

Humanity has 43 extrasolar colonies, 28 of them established in the last 15 years.

The "trading blocks" - supranational governments on Earth and corporate flags-for-convenience in space - are the American Federation, the International Commonwealth, and the United Nations. AF and IC members do not belong to the UN, which is now only one of three blocks. They grew out of international trade and military agreements following the chaos of WWIII.

The UN - by far the most populous trading block on Earth itself - officially governs the Coreward arm of the Solar Main, with 23 colonies, 15 of then new.

The American Federation and International Commonwealth share the Rimward arm of the Solar Main, with 19 colonies, 13 of them new.

The map does not show (yet) unsanctioned colonies set up by all sorts of non-governmental parties and non-affiliated states.

For the full-res map look HERE. 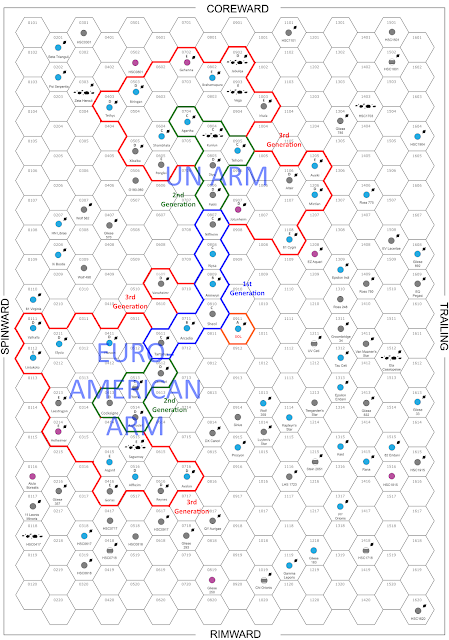