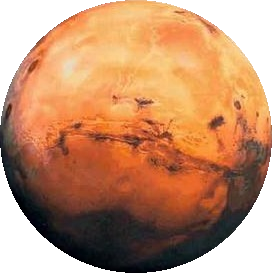 Nibiru is a dying, ancient world. Once it was the seat of wondrously advanced civilization. But now it is far past its peak. In its hubris and avarice, it became decadent, declined, and finally only a shadow of its semblance is left. Where forests stood, now cold deserts sprawl. Cities lie in ruins. The oceans are dry. Vast polar ice caps trap most water - and not a little of the atmosphere.
The Scar- Nibiru's vast equatorial rift valley - once housed Nibiru's mightiest river, which fed the Old Sea to the south. Now it is far more slender and feeds the Scar's own small, salty sea. The Old Sea dried; it is now a cold, salty plain called the Rusted Sea. But at least one can easily breathe the air of the Rusted Sea. Unlike the Northern Highlands, where the air is thin, hardly breathable on the Highlands proper, and utterly unbreathable on the Northern Mountains.
Eons ago, Nibiru was a warm, humid world with significant jungles. Ruled by reptiles of all kinds. Dinosaurs. A reptiloid civilization. For some reason, potentially something nasty the reptiloids did (technomagical war? an experiment gone astray?), the world started to begin to cool and dry out. This stabilized for a few eons, though the jungles were gone. The reptiloids were mostly extinct, as were most dinosaurs. The survivors migrated underground, where it was still warm and humid.
Eons passed. The Ancients rose. They were slender and intelligent to begin with; at their technological pinnacle, their physical prowess declined while their intelligence rose (think hairless elves growing into shorter and thinner Gray Aliens). The Ancients built a massive civilization of sorcery and superscience.
Their eldritch might grew to a degree that a sizeable percentage of their population had at least some sorcerous abilities.
The ancients, in their final form, were unsuited for war and labor. Initially, they used machines for these ends, but as they grew decadent and sorcerous, breeding servitor races was cheaper. They crossed themselves with White Apes to create Men - versatile servitors better suited for labor and war. They then crossed Men with White Apes once more - to create the far less intelligent Ape-Men as heavy laborers and shock troops. They crossed Men with surviving Reptilians to create Lizardmen and shock troops. They then crossed themselves once more with Men to create foremen and officers for their servitors, the Nephilim.
The Ancients' decadence knew no end. As they turned to Black Magic for raw power, Nibiru's already fragile Ishtar, the world-goddess, began to die. Their technology and sorcery already declined to such a low degree that they could not resurrect Ishtar.
As the world began to die and dry out once again, the Ancients dug canals, fed by vast machines on the polar ice-caps, to bring water to the dry equatorial regions, where the climate was still bearable.
But the Ancients died out themselves. (technomagical war? summoning the wrong demons?).
Now, only their former servitors remain to fend for themselves.

So, you have, among other things:
Posted by Omer Golan-Joel at 1:45 PM 5 comments: