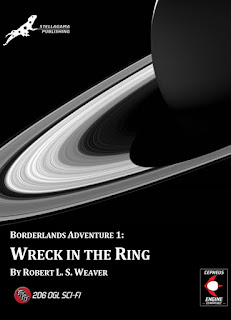 The interstellar transport Tallmadge's Splendor crashed on an asteroid moonlet of a remote gas giant in a barely-explored frontier system. Twenty-four years later, a belter hires some intrepid adventurers to help him salvage the wreck. Navigating and inspecting a dead ship – most of which is in hard vacuum – is not an easy job. Worse, the belter's team members have ulterior motives, and something is still alive aboard the doomed spacecraft.

Wreck in the Ring is an old-school deep space exploration adventure for 3-5 PCs, using the Cepheus Engine rules and fully compatible with any 2D6 OGL Sci-Fi game. The default setting is the Parvati system, on the very edge of Terran space, in the These Stars Are Ours! setting published by Stellagama Publishing. However, it will fit very easily into almost any interstellar sci-fi setting.

The PCs should have a variety of shipboard skills, whether they have their own ship or not. Mechanical, Engineering, and Zero-G skill will be most helpful for this job. 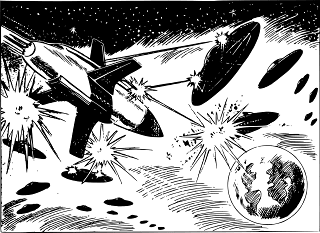 So how does a Star Empire work? This question was recently asked in a Traveller-related Facebook group. For your reading pleasure, here is an edited version of my reply there.

The advantage of a hereditary ruling caste is relative stability. Sure, there are intrigues and some internecine warfare, but as a whole, the people (or aliens) who run the system have interests going many generations into the future and thus a stake in maintaining the status-quo. Plans are long-term and projects suffer from less interruptions. One stable form is the "Zaibatsu" type of system of a few large monopolist corporations run by great noble houses with hereditary managers and owners. This also stabilizes the economy as a great houses' business partners and rivals are the same families for decades or centuries - you can "pre-arrange" trade and agreements and keep surprises to a minimum.

The big disadvantage is that such a system places a ceiling to a commoner's progress in life and social station, no matter how talented or ambitious he is. When the system works well, it compensates by great house patronage of various artists and scientists, though this still offers less opportunities than a meritocracy. When it works badly, the system breeds incompetence and blocks innovation.

The most stable, but also most stagnant, system is one run by long-living nobles using anagathics to rule for centuries. Rulers plan for the very long term and act consistently for centuries, but also remain the same people with the same ideas and ways of thinking.

In These Stars Are Ours!, the Reticulan ("Grey Alien") Empire is such a polity. Nobles receive a special kind of longevity treatment which allows them to live for centuries - and in some cases almost a millennium. Competent commoners or those with psionic potential can rise to the Gentry - lesser nobility - but cannot go beyond it. The upper crust of Reticulan Imperial society is strictly hereditary and with life expectancies measured in centuries.

This system was stable for millennia. It brought the Reticulans to a stable, powerful empire with enormous TL13 wealth. The downside was that in recent centuries, the Empire ossified to such an extent that it blocked innovation and resisted change. For many commoners, this state of affairs was good - after all, thralls (such as the Terrans) bore the main brunt of fighting the Empire's enemies, while most Reticulans did not suffer from war or poverty and enjoyed an excellent quality of life. Many scientists and engineers, however, resented such a system in which their work and creativity were harshly restricted, and where the practically-immortal ruling caste was hostile to new ideas.

This gave birth to the Technocratic movement - an underground movement desiring a highly meritocratic society run by scientists, engineers, and mavericks based on competence and innovation. This ideology fermented in the shadows for centuries, but boiled into open rebellion when Terrans threw away the Imperial yoke. Now the Empire has to contend with the aggressive Terran upstarts (a republic - militaristic but quite meritocratic), as well as with the Technate created by the Technocratic Movement on Reticulan worlds conquered by the Terrans... And the constant threat of additional Technocratic revolts.

Still, the Empire remains strong and stable, even though it power waned to a certain degree after losing the War to the Terrans.

Also, when the type of Empire described above functions well, direct taxes are low. There is a certain indirect "tax" caused by Great House monopoly on certain staple good, as monopoly naturally inflates prices. However, as long as the system functions efficiently, such increased prices are still reasonable and profits allow the Great Houses to fund the functions of government out of their own pockets. Therefore, the average citizen can ignore politics for the most part - no need for any "civic virtue" or active participation in governance. The government runs itself, collects low taxes, and while certain staple goods are monopolized, many others enjoy free trade. So the citizen lives his own life and prospers, though he has no say whatsoever in the affairs of state.

When the system malfunctions, however - which is inevitable on the long run - things are much, much worse. Incompetent debutantes and playboys leaving the affairs of state to similarly incompetent toadies. High taxation to fund the good life and white-elephant projects of the Great Houses. Economy clogged by over-monopolization. In military affairs - an apathetic population lacking any desire to fight protected by unreliable huscarl mercenaries and Imperial forces led by inept nobles promoted to the top ranks by the virtue of high birth.

This is my take on Star Empires.
Posted by Omer Golan-Joel at 3:51 AM 1 comment:

Even more musings on Traveller and CE skills

Back to my favorite subject!

In Classic Traveller and the Cepheus Engine, Skill-0 means basic training and literacy in the subject which is sufficient to perform some tasks but insufficient for gaining employment in the field. Skill-1 is employable and in CE can earn you very good pay in some cases.

For example, My mother knows how to check her e-mail, do basic Google searches, take pictures with her phone camera, type at a reasonable speed, and use KODI (and similar streaming services). However, she would be clueless in any further technical task, even installing updates on her Linux Lite machine or installing apps on her phone from Google Play. That would be Unskilled in CE terms.

My fiancee knows how to operate a computer, an Android phone, or an Android streamer, including updating, installing new apps, and even installing and configuring KODI extensions. She knows that the solution to 50% of basic computer problems is a restart and can also solve several other basic issues, both ones related to loose connectors and some software issues. She knows the basics of MSOFFICE use but not any more advanced tricks. That would be Skill-0 in CE terms.

I have good knowledge of messing around with Windows and various Ubuntu distros, assembling a computer from parts I buy, advanced MSOFFICE functions, advanced Google search functions, and how to solve a wide range of software related issues (even a few hardware ones).  I can write simple but very readable and well-organized scripts in Python. I type at 50 or so words per minute. I use many of these skills as part of my job which combines translation, editing, content editing, and information services. That would be Skill-1 in CE terms.

This is one reason I like the Classic Traveller skill system. Skill levels are not an incremental increase in your roll bonus, but rather denote actual very different levels of skill and are quite "realistic". This is the difference between unskilled (untrained), having basic literacy in the area (Skill-0), having a baseline employable skill (Skill-1), being a lower-level certified professional (Skill-2), having a full-blown Profession (Skill-3) or being an expert (Skill-4+).

In medicine: Medicine-0 is first-aid/CPR training; Medicine-1 is a paramedic; Medicine-2 is a registered nurse (a certified professional) or a medical intern; Medicine-3 is a proper doctor (a Profession); experts have Medicine-4 or higher.

This also explains the CT training rules - which I intend to port into CE. At this scale of skills, the gradual accumulation of experience alone can rarely bring you from one level to another. You need both experience and study. You can teach yourself in some cases, but this requires dedication.

How many nurses (Medicine-2 and let's say DEX 8) gain the medical knowledge and proficiency of a surgeon (Medicine-3 and DEX 8) simply by working as a nurse for a decade or two? This requires deliberate training, as well as practice. It also takes time, and not everyone succeeds in this.

How many trained combat soldiers (Gun Combat-1) become designated sharpshooters (Gun Combat-2) or snipers (Gun Combat-3) after a tour of duty or even several tours of duty, simply by being soldiers and using their gun a lot? Again, this needs deliberate training (or at least self-training) and practice. Not everyone will be able to do so.

How many people belong to two Professions (say, Skill-3 in both Medicine and Engineering) at the same time? Some do, but this is uncommon.

Many people will never be 'proper' high-level Professionals. Many sci-fi heroes are not "Professionals". Ellen Ripley, from Alien(s), would be (in CT) UPP 67C997 Merchant 4th Officer, 3 terms, age 30, Vacc Suit-2, Pilot-1, Navigation-1, Admin-1. In CE, she will also have several Skill-0's. Only 5 skill points, highest skill at 2. Enough for boundless sci-fi heroism and adventure!

This is not D&D. You don't go "zero to hero" in Traveller or CE. You are a skilled adult, sometimes a professional. But there is a sharp limit on what you can learn and on how far further experience and training can get you.
Posted by Omer Golan-Joel at 8:45 AM 6 comments:

Holding These Stars Are Ours! in my own hands! 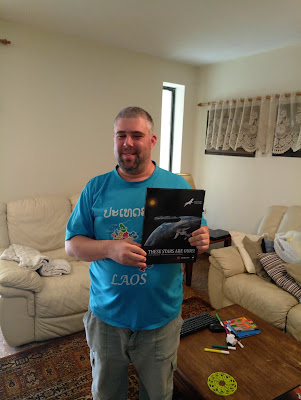 Nothing compared to the pride of holding your own printed book in your very own hands! Today, UPS brought me These Stars Are Ours! in all its glory! This fills me with motivation to accelerate my work on further products in this line!