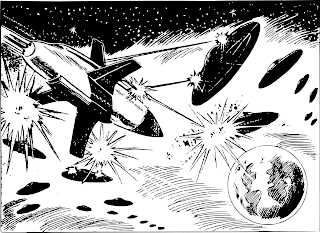 Dark Nebula, 2900 CE. The Rule of Man is dead for 157 years. Human - mostly Solomani - civilization persists on Maadin, far from the horrors at the Core. Now, a new force arises to challenge the nine-world Maadin Confederation. Proud aliens, hungry for land and glory. The Aslan. A mere 377 years since their invention of the Jump Drive, the young Aslan grow their empire rapidly. For centuries, their meager Jump-1 drives confined them to the Kuzu Main to the Spinward. However, in the last century, Jump-2 technology acquired from Solomani traders allowed them to expand to the Trailing as well. Thus, their thirst for land leads them into inevitable conflict with the Solomani of Maadin.

But how do these two powers organize their navies towards the coming war? One should remember that neither side has a copy of High Guard. While Classic Traveller rules lead to certain conclusions in ship design, both sides build their navies based on historical experience and societal factors. Such historical experience has much to do, in turn, with various factors outside raw Traveller ship optimization. Being untested against one another, these forces have naval doctrines which would evolve with the conflict.

The Solomani draw their naval tradition from the Interstellar wars between the nascent Terran Confederation and the Ziru Sirka. In these wars, while missile boats - a Terran innovation - played a certain role, major victories were won by massive capital ships. The concentration of battle-cruisers and battleships, alongside Terran technological advantage in Jump-3 drives, led to a decisive Solomani victory over the crumbling First Imperium. The subsequent Rule of Man faced little external conflict, while internal conflict during its collapse rarely involves large naval engagements.

Thus, the 30th century Solomani naval doctrine calls for significant investment of resources in Heavy Cruisers (Type-CR), with an eye towards the construction of Dreadnoughts. The Confederation currently possesses two Heavy Cruisers, CNV Gilgamesh and CNV Enkidu (CNV is Confederation Naval Vessel), and its first Dreadnought, CNV Inanna, is under construction at the Maadin shipyards. Other combatants are much smaller than these multi-kton monstrosities, and many are below 1000 tons - mostly frigates, small missile boats, and destroyers (the latter being in the 1000-3000 ton range). Two massive troop ships, CNV Enki and CNV Enlil, prepare for ground invasions [actual fleet composition may vary once I run through Trillion Credits Squadron data for these fleets].

The Solomani plan is to use these two main combatants in a concerted attack against Aslan naval concentrations, using an aggressive strategy aimed at destroying Aslan naval infrastructures before the aliens will have a chance to organize their forces. Maadin gambles on an all-or-nothing strategy - leaving their rear mostly unguarded while burning their way into Aslan space by superior firepower to destroy Kuzu's shipyards and thus neutralize the Aslan threat for the time being. Solomani are uninterested in conquering and occupying Aslan space itself, but plan to use this war as a pretext to annex the various independent human worlds to the Confederation, or at least render them its client-states.

Thus, the Solomani main objective is to neutralize and contain the Aslan threat, with the secondary objective being expansion into neutral human space.

The Aslan naval doctrine revolves around two factors - the fragmented nature of the Heirate and the Aslan male. Lacking a unified naval force, each major Aslan clan fields its own navy. This greatly limits Aslan ability to field Solomani-style Heavy Cruisers, at least early in the coming war. Aslan clans also have to prepare for limited, but serious, aggression by other clans, alongside preparation for war with the Solomani. This biases their naval doctrine towards a larger number of smaller ships. The Aslan male is another factor influencing alien strategy. Each Aslan male, especially high-born ones, dreams of glory among the stars - and a lion's share of prime interstellar real-estate. Aslan males love to be pilots, where their superior spatial awareness and predatory instincts shine and lead them to glory. If they cannot be pilots, they dream of being Marines, facing the enemy in honorable face-to-face personnel combat. Gunnery, another traditional male naval profession, is only a distant third in its desirability.

This leads to small ships and swarms of fighters to maximize pilot positions, alongside preparation for ground combat and boarding actions. The few major clans prepared for combat with the Solomani field a Light Carrier each (I'll import the Mothership from Imperium, which is Dark Nebula's sister-game, potentially toned down to be listed as a Light Carrier rather than a full-scale one), alongside a Troop Transport; other ships tend to be much smaller attack craft, often below 1000 tons. There are five such clans interested in war with the Solomani, leading to 5x Light Carriers and 5x Transports, alongside much smaller support and patrol craft.

The Aslan plan, if one can describe it as such, is to invade human space piecemeal: first Enjiwa, Pasar and Godoro, then Simsek and the Mizah Cluster. This would be  a race between the five clans; and will potentially lead to (ritually limited) conflict between them. Invading the confederation itself is a distant objective, as there are hordes of ihatei thirsting for land who must be satisfied - this is the primary Aslan objective.

Thus, the primary Aslan objective is an interstellar land-grab, with the secondary objective being a grab for the greatest prize in the Dark Nebula - Maadin itself.
Posted by Omer Golan-Joel at 1:37 AM No comments: