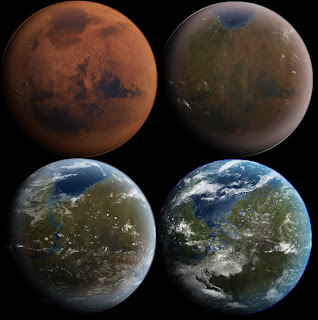 Trying to fight and forge ahead despite setbacks 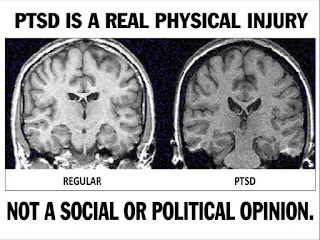 It ain't easy being me. Between PTSD and depression, both of which originate from very bad things I underwent in my childhood, life is a struggle. I struggle to stay alive; I struggle to do something meaningful with my life despite the black pain which returns and floods me once and again like a dark wave. But I fight. I have no other option. I do far less than I would like to, I have so many great ideas but only a little of them get realized as sometimes my free time is taken over by dark thoughts and darker crying.

But I am trying to fight ahead! Despite all this pain, I am trying to do something with my life. Gaming gives me joy; writing gives me a purpose in life and a reason to live. The other reason I have to live is my spouse, Einat Harari, and my mother, Sarah "Suri" Golan. I live for them, and I live to write. And I am fighting. The struggle is difficult, and other than the support of my spouse and mother, and a few close friends to whom I reveal my inner darkness, and some mild sedatives, there is no outside support. I have to fight on by myself. And I will continue to fight as long I am alive, hopefully for many years.

My next goal is to finally finish the draft for Barbarian Conqueror King. Once BCK is finished, I am going to work on Visions of Empire as a commercial setting for the next edition of Mongoose Traveller (I will start writing it only AFTER BCK is done). All the meanwhile I will continue to run my bi-weekly BCK campaign using D&D5E/ACKS hybrid rules (there might be some conversion notes ready after I finish writing the draft).

I will fight! I will never give up to darkness! I will forge ahead no matter the pain!
Posted by Omer Golan-Joel at 12:52 PM 12 comments:

Some thoughts about re-focusing my Visions of Empire setting

The "core" alien species I really like and who always enter my ideas, plot and parts of this setting are only three (apart from us Terrans, that is) - the Reticulans, the Cicek and the Zhuzz. The rest are far less central to the setting concept, even the Chuwak. One idea I had was to keep only these (and maybe the Chuwak as the Reticulans' arch-enemies) as the Major Races and relegate the rest - Fanja-Kanja, Ssellassians, Phnunk, Klaxx and so on - to the status of "Minor" Races with a few planets each (usually just the homeworld and the occasional off-world individual or colony). The map can also be changed so that the "interesting" space would be the Terran "quarter" (or quadrant) of the map showing Terra, many Terran colonies, the Reticulans, Cicek and Zhuzz; the Reticulan Empire (and later Technate) would mostly exist off-map, as well as most of the Minor Races. This will help the setting get an important focus.

The main two ideas about minor races I have with this are for the Sselessians and the Fanja-Kanja. The Sselessian homeworld was glassed by the Reticulans a long time ago when they dared revolt against the Empire. They were then forced to become nomads, and slave-fighters for the Empire. The Terrans of course capitalized on this during the Terran Liberation War and claimed openly that they were fighting to liberate the Sselessians (among others) from Reticulan slavery. And indeed, at the war's end, the dissident Sselessians (the ones who supported the Terrans and fought for them) got a homeworld and their own "independent polity" (with Terran advisers, of course) on a few worlds conquered from the Reticulans. The Fanja-Kanja, on the other hand, do have a homeworld, but no 'proper' polity - but on the other hand they are common everywhere as merchants, and are allowed to roam freely by the Reticulans. Reticulan propagandists always show them as an example for how conductive the Empire is to people who stay peaceful and cooperate with it.

There were at least two polities (that is, Terran client-states) formed by Terran victory - the Sselessian new homeworld and the Reticulan Technate. Of course the Cicek had a new 'government' as well, but as all things Cicek go, it was very loose, and not really controlled by the Terrans (or by anyone else, even the Cicek themselves; it isn't easy herding anarchistic tribal warrior-lizards into a cohesive political structure, after all).

The bottom line: let's focus on what's relevant to the setting core, i.e. Terran space. At its heart, Visions of Empire is always about Terrans, and their interactions and relations with aliens. What goes about, for example, on the other side of Reticulan space, and their long war with the Chuwak Holy Dominion, is another story for another time, part of the background, but not the main story here.

So I was thinking about a quadrant worth of space, 2 x 2 subsectors in size, with Mother Terra at its center or close to its center (this map would actually be easy to make from my old map using Paint.NET). Reticulan space is on the Trailing-Rimward part of this, Cicek on the Rimward, and Zhuzh on the Trailing. Terran Space is open to a frontier on the Coreward and Spinward. Alien space extends far beyond the borders of this area, and might eventually get a dot-map, but is not "core" to the story at hand. 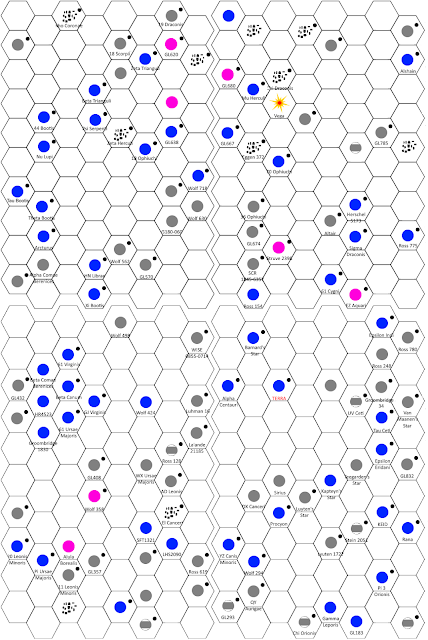 For the full-res starmap, GO HERE.
Posted by Omer Golan-Joel at 1:17 AM 2 comments: