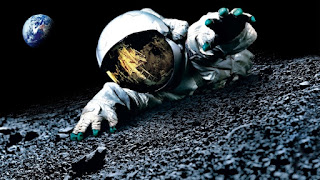 Over two years ago I wrote an outline for a near-Earth, near-future setting called Hard Space. Since then, Stellagama Publishing has published These Stars Are Ours! our premier space opera setting. More important to the current discussion, however, is another Stellagama product - Near Space. It uses abstracted (“flattened”) real space with some hypothetical brown and red dwarfs added for better gameability. The latter allow Jump-1 travel from Sol to other worlds. They also create a “Solar Main” allowing slow Jump-1 ships to travel quite far, albeit at a snail’s pace.

Hard Space is a setting explicitly using the Near Space data. Right now, I post here it as a series of blog-posts for Classic Traveller and the Cepheus Engine. If there will be enough interest, I might consider making this a commercial product for the Cepheus Engine. All map locations and physical world stats in Near Space exist verbatim in Hard Space. Some colonied by humanity and some waiting to be explored.

This does not come at the expense of my main sci-fi universe, These Stars Are Ours! (#TSAO). As in my 2016 post, I have resolved to write three paragraphs of TSAO-related (or Cepheus Light-related) content for each paragraph I write for Hard Space, whether on this blog or otherwise.

Space - this is an (early) hard-ish space interstellar setting. Space is hard. Apart from the cosmic horror element mentioned above, science is pretty hard. No grav-cars, no fusion making your life easy - you use vector-thrust and fission. Ships have reaction drives. And space can definitely kill you. Think The Expanse.

Anyhow, the premise of Hard Space is this - the year is 2130 AD. Humanity has only recently reached out to the nearby stars, but limited technology does not allow for rapid interstellar expansion. Space is dangerous, ships are small, and even sixty-three years of faster-than-light exploration and settlement have only carved out a small, sparsely populated colonial region around Sol. As the old national governments on Earth have been bled dry financially and politically by the events of the mid-21st century, space is the domain of the private sector - of the larger corporations; once you leave Luna's orbit, Earth governments are little more than flags-of-convenience to private-sector investments and facilities. Competition among the "Big Four" interstellar corporations, and to a lesser degree between their rivals, is tense and quite cutthroat, leading to a great degree of underhanded actions and industrial espionage.

Most of humanity still lives on Earth, followed by Luna and Mars. As Earth is highly polluted, extremely crowded, and suffering from an unstable climate, many people - especially from the lower classes - are willing to take major risks to move to the colonies, where living conditions are often somewhat better, and where corporate jobs abound, even if they are mostly low-level jobs. To get away from the urban Blight of Earth, many would even accept the risk of travel by Low Berth. Moving to Luna or Mars is easier, but the jobs on the extrasolar colonies pay better, and some of them have actual open-air environments.

This is a time of outward expansion and adventure among the stars - and also of great, mortal danger. Going into the Unknown is a particularly risky endeavor, as the Unknown as teeth, and Claws, and tentacles and even the slightest malfunction in a ship's drives or in a spacer's vacc suit could spell disaster to the hapless explorer. Corporate and government marines battle vicious pirates, desperate rebels, and nasty xenomorphs on many worlds, facing a bloody attrition rate; explorers and couriers on the frontier and beyond - colloquially called "scouts" - go among unexplored stars, and in many cases do not return from their missions. The rewards of interstellar exploration are staggering, but so are the risks...

"Going out", into interstellar space, is relatively "cheap". A wealthy cult or rich madman can charter a starship and start their own "utopia". Engage in immoral research, dabbling in the occult,

Sources of inspiration - literatureMars Trilogy by Kim Stanley Robinson
Roadside Picnic by Arkady and Boris Strugatsky
Call of Cthulhu, Shadow over Innsmouth, and other works by HP Lovecraft