Make Room for the PCs

One of the most important aspects of setting design for most role-playing games is making sure that the setting accomodates the player characters (PCs), and, similarly, that it allows them to make their own decisions and make a significant impact on the setting. After all, the PCs are the heroes (or villains) of the game, and thus their decisions, their successes and their failures should be significant within the game and have an impact on the setting.

This is one reason why frontier or post-apocalyptic setting are very gameable. Without a strong, overbearing government (or other establishment), without strong law and order, and without powerful NPCs running all around the setting, the actions of a few brave (or vile) individuals become important. For example, if there is a powerful and efficient police force to drive back bandits and criminals, there would be less need for the PCs to defeat them; on the other hand, where chaos reigns, little would stand between the bandits and the control of the area - except for the PCs.

This is, for example, one of the problems I had with the official Traveller universe (OTU). With an enormous, all-powerful, omnipresent Imperium with no real frontiers, the potential for adventure and for making an impact on the setting diminishes. This was more or less solved by the New Era setting, which removed the Imperium and turned everything into a frontier, but this setting had its own problems. The very long timeline (several thousand years into the future) also dwarves, to a certain degree, the characters and their deeds.

Therefore I prefer settings where the forces of law and civilizations are limited and where the players can make a difference. In a Traveller game, for example, I prefer "hard" frontiers with a great unknown beyond them, frontiers where the central government only has a limited degree of control and where exploration and piracy are possible.
Posted by Omer Golan-Joel at 1:47 AM No comments:

Stan Johansen Miniatures have made a series of very cool lizard/dinosaur humanoid miniatures with varied weapons. The minis are pretty solid and three-dimensional, and ripe with cool details. I've bought three squads of regular infantry (with carbines, rifles and pistols) and a pack of heavy weapon troopers (armed with rotary grenade launchers/chainguns, machineguns and rocket launchers).

These are my most detailed mini picture so far, and they took me more than two months worth of weekends to complete. 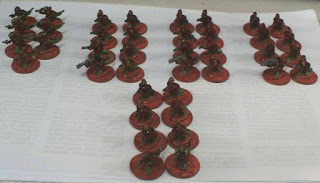 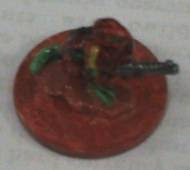 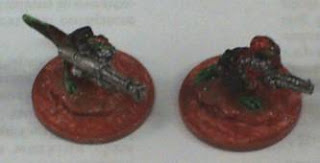 Invasion of the Space Cockroaches!

I've bought a platoon's worth of Spug from Spriggan Miniatures and painted them as "space cockroaches" for use with Traveller, as well as with Fast and Dirty (FAD) miniature games. I especially like their grav-bikes, which are sleek and cool. 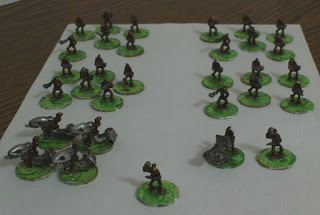 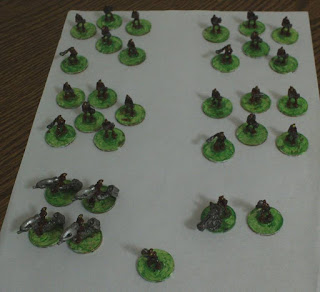 Posted by Omer Golan-Joel at 2:57 AM No comments:

I've bought a few 15mm robot minis a few months ago for Traveller and similar RPGs (maybe Shadowrun, Mutant Future and Paranoia as well?). So here they are, my first attempt ever at painting miniatures: 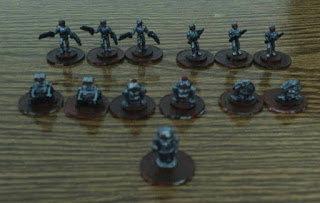 Welcome to my Hideout!

In this blog - the Space Cockroach's Hideout - I intend to share my thoughts about gaming, game-design, science-fiction and miniature gaming. It would be a general repository for my ideas, mad ravings and rants related to role-playing games and related matters, posted online for your viewing pleasure. I will also post photos of my latest miniature painting projects and I will review role-playing books and miniatures.