My journey through the OSR landscape was a long one. After abandoning D&D 3.xE in 2008 or so, I moved to the Basic Fantasy RPG (BFRPG). This rekindled my joy of fantasy role-playing, after an almost-burnout by 3.xE, where I felt that prepping game material is a menial chore. In BFRPG, I could simply run with the game and have fun, even as Dungeon Master.

Afterwards came Lamentations of the Flame Princess; the Adventurer, Conqueror, King System (ACKS), a short bout of Swords & Wizardry: White Box, and, finally, settling on Old School Essentials (OSE) as my go-to fantasy RPG. However, things have changed recently, and I am returning to Swords & Wizardry!

The reason is that Swords & Wizardry is enjoying rapid growth here in Israel. After the core book was translated in the previous decade, a local team gathered and created an actual Beginner Kit boxed set! This costs 99 NIS (approx. $30 USD) and includes all the rules necessary to play the game up to level 5, as well as dice and two adventures! This Kit is now sold in multiple game, toy, and book stores across Israel, ready to bring new players and Game Masters into our hobby!

This opened the floodgate to a burgeoning ecosystem of supporting books, especially adventures, put forth both by the local translation team, and by third parties. This happens while D&D 5E is unavailable in Hebrew (other than its mostly-unformatted SRD) due to licensing issues. While most adult Israelis know English relatively well, children are rarely fluent in it, and even many adults prefer to run and play games in our native tongue. So, the game is growing exponentially here!

I am also behind the local (Hebrew) Swords & Wizardry fanzine, the Fighting Agama, which already published two issues, and a third one is already in the works - this is intended to be a bi-monthly, or maybe even later monthly, publication.

Thus, I am switching over, for all my "D20 fantasy", to Swords & Wizardry!

Disclaimer: The Hebrew version of Swords & Wizardry is based on Swords & Wizardry: Core by Matthew J. Finch (https://swordsandwizardry.com/). The translation was performed by Itai Greif, Michael Gorodin, Eran Aviram, Itai Horev, and Eran Ben-Saar. the local team is unaffiliated with Frog God Games or Mythmere Games.

A post-apocalyptic Classic Traveller setting I am thinking about is as follows, briefly, as a more elaborate and less standard replacement for Harsh Beginnings:

What do you think?

I wanted for some time to create a side "pet project" free/Fair Use setting using 3-book Classic Traveller. I wanted something strictly non-OTU, so this means writing something which is not Dark Nebula.

I have tried consolidating concepts for my Post-Imperial setting. Still no clear line of thought, only various ideas. Instead, I will focus on my near future/near Earth setting. Hardcore Classic Traveller at TL9, with the only deviation from the rules being using custom world generation based on colonization wave.

This should have a very different tone from my older Hard Space setting concept. Neither "true" hard science, nor chrome-focused cyberpunk. Instead, it will detail a harsh future inspired by the near-future sci-fi novels and other media I consumed in the 1990's, which was mostly from the 1960's, 1970's, and 1980's.

Some ideas from my older Hard Space setting concept would serve here, but the tone is different: unlike Hard Space, CT: Harsh Beginnings is neither cyberpunk nor strictly hard-science.

Classic Traveller's Book 1: Characters and Combat provides a surprisingly complete collection of low-tech arms. Weaponry includes a good range of TL0-3 weapons, from spears to muskets, ideal for low-tech lost colonies and to forays into medieval and fantasy role-playing. Furthermore, Supplement 4: Citizens of the Imperium provides bows and crossbows, including the inaccurate but rapidly firing Repeating Crossbow. Book 3: Worlds and Adventures also provides common adventuring gear, such as torches.

However, the one thing lacking in these rules is low-tech armor. The only low-TL armor in Classic Traveller is the Jack (leather) armor (TL1). Below I will detail a few additional suits of armor for your Proto-Traveller game.
Chain, TL1, Cr250. A suit of flexible armor composed of many small interlocking metal rings. Treat as Mesh against TL2 or earlier weapons and as Jack against modern weapons. Weighs 18000 grams. Like modern armor, it does not count towards Encumbrance.

Elven Chain, TL1, Cr2000. A suit of particularly high-quality and lightweight Chain armor. Treat as
Mesh-1, weighing only 8000 grams. At the Referee's option, it may even count as regular Mesh against modern (TL3+) weapons.

Plate, TL2, Cr1000. A heavy full-body suit of armor built of metal plating. Treat as Cloth against TL2 or earlier weapons and as Jack against modern weapons. Weighs 25000 grams, and, unlike other suits of armor, Plate does count against the Encumbrance limit.
Posted by Omer Golan-Joel at 6:31 AM No comments:

On the Implied Setting of Classic Traveller 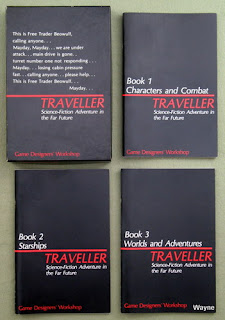 Note that, in the setting postulated in Traveller's Three Black Books, especially in their 1977 edition, star travel is infrequent, dangerous, and expensive.

Add to that the risks of engine failure and/or "misjump" of the ship you are riding even when in "safe" Mid Passage. And frequent piracy. And hijacking (ships are worth a lot, so thieves abound).

PCs are Travellers - belonging to the small class of people who actually travel frequently, be that thanks to wealth/Travellers' Aid Society membership, or due to having a job on a starship.  Most NPCs stay on their homeworld.

Also, the average (and approximately median) world has hundreds of thousands of residents. The average world, isolated by the dark gulfs of space, has the population of a small city.

Worlds with billions of residents are rare, and, if their tech level permits, are often local hegemons. This has interesting implications to interstellar warfare. First of all, given ship size and availability, expect even large planetary invasions to be the equivalent of the Third Battle of Cartagena rather than of D-Day. Second, as world populations are typically small, a reasonably-sized mercenary unit can often have local military significance.

That's Classic Traveller as written originally. Within a few years, it evolved and changed into a more "open" space-opera setting, with various unified task systems and with a grander, less isolated setting. Passage costs remained high, but starships grew, and the setting changed from one or two subsectors rolled by the Referee to the vast Imperium.

Considering my recent addiction to Knave, I must say that one facet of the rules players are often dissatisfied with is the absence of non-humans. People want to play dwarves! While I can simply make such species completely descriptive, I feel that they should have a mechanical implication as well.

In the Knave spirit, I keep these rules to a bare minimum. Each species has an Ability Score requirement, an edge, and a flaw. This may seem somewhat minor in scope compared, say, to the OSE treatment of such creatures. However, once again, this is Knave, and Knaves tread lightly.

Below is a tentative list of species I may permit in my Knave campaigns:

Dwarf: minimum Constitution Defense of 13. Advantage on any roll related to construction or mining and searching for secret doors. Base speed is 30' rather than 40'.

Geckofolk: minimum Dexterity Defense of 13. May effortlessly walk on walls; may walk on ceilings at half speed. May not use two-handed weapons due to size; may not climb or cling when wearing boots or gauntlets.

Gnome: minimum Intelligence Defense of 13. Knows one level 1 illusion spell - chosen one the player - requiring no inventory slot, which they may cast once a day per 2 levels of experience (e.g., a level 4 gnome can cast it twice). May not use two-handed weapons due to size.

Halfling: minimum Dexterity Defense of 13. Advantage on throws to pick pockets and other tricks of sleight of hand. Consumes twice as much food a day than other species.

Human: no Ability Score requirements. Neither an advantage nor a disadvantage. Default species.

Insectoid: minimum Dexterity Defense of 13. Immune, poison, disease, and ghoul paralysis. Disadvantage to any social rolls (other than intimidation) with other species.

Lizardfolk: minimum Strength Defense of 13. May hold breath for 10 minutes and swim effortlessly at 40' per round. May not wear helmets or boots designed for other species due to different morphology.

Orc: minimum Strength Defense of 13. May become enraged once per encounter, granting an advantage to Attack Rolls for 1d6 rounds. Disadvantage to any social rolls (other than intimidation) with other species.

Posted by Omer Golan-Joel at 12:34 AM No comments:

We at Stellagama Publishing are often asked: what's so special about Cepheus Deluxe? What's the difference between it and Cepheus Light or the Cepheus Engine SRD (or other 2d6 systems for that matter)? Below are six primary differences between these rulesets.

1. Design Choices are already built into Cepheus Deluxe. One of the major complaints many Referees have is that 2d6 systems are toolboxes of rules. Some Referees like toolboxes, but others don't have the time or interest in making a complete game out of the toolbox. Many Referees need a complete set of rules that they can use to quickly run games. We've made certain design choices to make a complete game that is playable out of the box.

2. Non-random character generation. we offer Non-Random Character Generation as a standard because that's what many of today's role-players desire. There's plenty of good things about randomly generating characters, but there's a reputation traditional 2d6 systems have: the games where you can die in character generation. Even when you understand why that's a rule, sometimes you just want to play a scout, or you just want to play a space marine, and you should just be able to play that. We have kept random events tables, with chances for injuries or even prison terms to keep things exciting.

3. Complete rules for personal, vehicle, and space combat that can be played completely map-less and include rules for chases. The goal is to make combat exciting for all players, not just the dedicated combatants. Vehicle and ship combat is streamlined, and the damage system is designed to give players problems to solve, not hit points to track.

4. Many random tables for space encounters, adventure hooks, complications, and animal encounters, and a GM guide to help develop adventures and campaigns for sandbox or more narrative playstyles.

6. Optional rules to make your game more heroic or, alternatively, grittier, as you desire. You may use optional Hero Point rules and Traits to make your characters heroic. Ignore them for a gritty and more realistic game.

Posted by Omer Golan-Joel at 12:04 PM No comments: