What is this?
I have never read through, let alone play, the 4th edition of D&D. My experience with D&D is limited to BECMI, 2E, and 3.0E. I'm currently using the Basic fantasy RPG retro-clone rules to play D&D-style games.

Wizards of the Coasts have released a free set of Quick Start Rules and a free full-sized adventure available for download by anyone willing to check out the 4th edition of Dungeons and Dragons. I figured that, since these materials are completely free of charge, they deserve, for the very least, a read-through. I have read through both files - the Quick Start Rules and the Keep on the Shadowfell adventure - during the preceding week, and now I will post my first impressions from reading them.

Things I liked
1) The overall Quick Start rules are very clearly written for the most part. I find it very easy to understand the game mechanics. Everything is laid out in simple language and in a very readable format. In the first glance it looks quite easy to learn and play. The rules look quite simple (critical hits, for example, have been simplified to simple maximum damage rather than different damage multipliers and chances per weapon type; bull-rishes and grapples have been similarly clarified and simplified). I hope this also holds true in the actual 4E rules.
2) Attack powers no longer have saving throws; instead, the attacker rolls an attack against a static defense rating (similar to how AC is handled in 3E or 4E); there are four possible defenses - AC, Reflex, Fortitude and Will. I like this as it looks quite logical and streamlines the magic system as well.
3) Skills are simplified. If I understand this correctly, instead of messing around with skill points (which was a bit messy in 3E), your skill modifier simply equals your ability modifier plus half your level (rounded down). There are also less skills than in 3E (which, IMHO, had too many of them) and the skills have been consolidated. Feats seem to have been similarly simplified.
4) There has been a significant effort to cut down on paperwork. Now most of your powers are either At-Will (usable any number of times per day) Encounter (usable once per encounter) or Daily (usable once per day). Similarly, your HP recover completely after an Extended Rest. Therefore things look easier to track than in older editions.
5) It seems as if there was a conscious effort to cut down on the "15-minute adventuring day" phenomenon. Not only are most powers usable once per encounter (rather than a finite number of times per day), and not only is it easy to heal during combat without needing expendable spells, but you actually get benefits (Action Points) from doing multiple encounters per day. I like that.
6) Leveling a character seems quite easy, especially at odd levels. Just add a few bits here and there and you're set, without much page-flipping. Am I correct?
7) Wizards finally can fight with magic and only magic all day long, as some spells are At-Will powers. This means that in 4E the wizard won't have to resort to a crossbow or dagger after casting a few spells (which, in previous editions, could be very few per day).
8) Minions. I love the concept - expendable foot-soldier monsters easy to play and kill without much accounting needed; it also highlights the "boss" monsters and focuses the action on them. These rules also allows the Fighter to shine, with all his At-Will powers that do additional damage to nearby monsters; he'll reap through hordes of minions, which looks cool and heroic!
9) The KotS adventure feels quite cool, and lets the players to do heroic stuff (stopping a death-cult!) at mere level 3.

Things I didn't like
1) Wizard spells have been narrowed down. One of the things I love about BFRPG (or even 3E) Wizards/Magic-Users is their versatility in the hand of creative players; in 4E it seems that most wizard spells are combat-focused and seem to have narrow applications. I'd miss spells such as Pyrotechnics, Obscuring Mist and so on which could be very cool in the hands of crafty players...
2) Some of the monsters presented in Keep on the Shadowfell look quite grindy. A lot of monsters have quite a number of HP that the PCs have to chew through; the worst offender is probably the Gelatinous Cube with its whopping 152 HP that would probably take a very, very long time to kill at level 2-3. I hope 4E monster are not like that in general, as I don't want combat to devolve into a boring series of round-after-round chopping with At-Will powers for a large number of rounds.

Things I'm not so Sure About
1) I'm not sure how heavily the 4E rules are tied to their fluff. Some of the fluff - such as the planar cosmology and some of the races - is quite different from the assumptions of previous editions and would be quite difficult to fit into existing settings or campaigns (such as my Wounded Gaia setting). Could 4E be easily played with different fluff, different races and/or different planar cosmologies?
2) Healing Surges. They are a cute little game mechanic which I like from a mechanical POV, but I'm not sure how I'd explain them in-game; how are these wounds healed instantly without rest or magic? Do all PCs regenerate? Could all PCs cast the equivalent of Cure Light Wounds a number of times per day?
3) Combat is designed for miniatures and a grid. A grid has the advantage of being easy to convert between mini scales (I like 15mm personally rather than the standard 28mm scale), but it means that you need to organize a grid in order to play (rather than play off-the-cuff).
4) Characters apparently start the game with a lot more HP on level 1 than in any previous edition. On one hand, this makes them more fit for heroic adventuring (and reduces their chances of being killed by weak opponents), but on the other hand it might greatly affect the feel of a low-level game.
5) What is "Passive Perception"? The quick-start rules refer to it, but it is not explained. Is that simply a Perception skill roll made by the DM, or something else?
6) Monster stat-blocks, while very readable in their format, are quite long. I like the BFRPG stat-blocks which fill one or two rows of text; the 4E stat-blocks are quite hefty, and seem quite a chore to write during prep.
7) The quick-start rules say that they are best suited for a party of 5 players. This might be a problem for me, as I usually can arrange for about 2 players in an average game. Is the game playable with smaller parties, such as 1-3 PCs?

The Bottom Line
I think that the 4E rules, as presented in the Quick-Start Rules, are quite well-written and well-designed. However, I do have my reservations about them, especially in regard to the required party size, the limits placed in wizards and the potential for grind.
Posted by Omer Golan-Joel at 10:30 AM 2 comments:

I'm working on my own set of 15mm terrain features to make my 50cm x 100cm table more interesting to play FAD (and Traveller!) on. Right now I'm at the initial stages of making the terrain, and most features are not even primed, let alone fully detailed or painted. 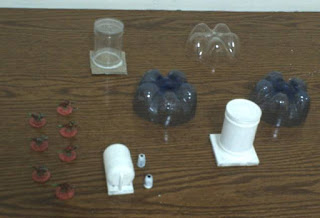 There will be three prefab modules (or tents) made from these plastic bottle bottoms, as well as three water/fuel tanks (two made from old toothpick containers and one from an old aloe-vera gel canister and an old electric wire) and two barrels (I don't recall from where they came). 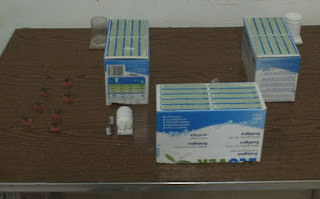 The tanks are the same tanks I'm using for the base camp above. I'll build the buildings out of these three washing-powder cartons, either simply cutting windows and doors into them and painting the window frames around them when I paint the models, and/or gluing additional cardboard stripes to them to make rows of windows with actual frames.

I might also be buying a few barrels and crates from GZG to make terrain even more varied.
Posted by Omer Golan-Joel at 10:46 AM No comments: 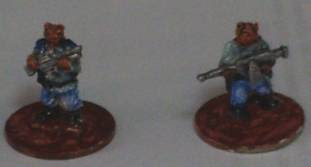 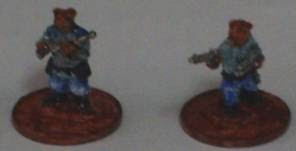 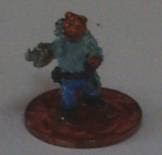 Posted by Omer Golan-Joel at 2:13 AM No comments:

The Importance of Quality Control

When a player or game-master buys a commercial game, he or she expects it to be perfectly readable and playable as-is, or, in other words, worthy of the money paid to purchase it. Without adaquate quality control, errors and ommission would inevitably creep into the product, making it less comfortable to use, or, in extreme cases, render it unusable in its published form.

Masses of errata can kill games; this has happened in more than one version of Traveller, for example (MegaTraveller and Traveller 4, I'm looking at you), where otheriwse excellent games were greatly hampered by poor editing and, in the case of Traveller 4, the ommission of an important table from the ship-design sequence. A good proof-reader or enough playtesting would have avoided these problems.

So, when you set out to produce your own commercial gaming material, pay attention to quality control measures. In other words, have a playtest, listen to your play-testers, and use a human proof-reader (rather than simply the word-processror's spell-checker). These simple measures would ensure that your game will turn out as good as it could and should be.
Posted by Omer Golan-Joel at 4:13 AM No comments: