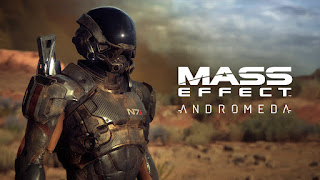 I have finally begun playing Mass Effect: Andromeda. I am a dedicated fan of the original trilogy. I even wrote a blog post discussing the lessons a tabletop military sci-fi RPG referee can draw from the original Mass Effect. Thus, I came with much enthusiasm. Below are my first impressions from the first two and a half hours of the game, which I played last night.

Note that I began playing for the first time only after Bioware released Patch 1.08. I am told that the patches greatly improved the game. So this post refers to the latest (June 2017) patched version.

The game runs flawlessly on High settings on my mid-range rig - Intel Core i5-2400 CPU @ 3.10GHz, GeForce GTX 960, 12 GB RAM, Windows 7 Home Premium 64 bit, and running both Windows and the game from an SSD. It looks gorgeous and runs perfectly smoothly with good FPS and no graphical glitches so far.

My first impression is that Mass Effect: Andromeda is a flawed game, an unpolished gem if you wish. Its interface is cumbersome and sometimes counter-intuitive. Getting into the menus, for example, takes one keystroke. Getting out of them and into the game requires you to go through many, many screens. Or at least I did not find yet the quick shortcut key for leaving the menus. You cannot pause during cut-scenes, which are sometimes very long - though if I recall correctly, previous Mass Effect games had this issue as well. You can no longer control you squad-mates' power use, only direct them whom to attack; however, they seem to be very effective on their own (more on the combat AI later).

The greatest flaw, in my opinion, is that the plot exposition is very weak compared to Mass Effect 1. In the original Mass Effect, within the very first hours of the game, it introduces Saren. It made perfectly clear that he is a nefarious villain. He does despicable things to the colonists in Eden Prime and plots to blow up its starport. The first hour of game-play also introduces the Geth and the Reapers. Within an hour or two you know the main plot - Saren is trying to bring back a long-dead evil alien species called the Reapers using something called the Conduit, and as you saw on Eden Prime, that will be very, very bad. Therefore you have a clear motivation to pursue the plot and a strong villain established early on.

In Andromeda, on the other hand, you see some sort of alien villain whose underlings killed one of your crew-mates and beat up another one or two of them. He seems interested in the older alien technology present on Habitat 7, and that's it. It is unclear what is motivation is, what he is up to, or why you should oppose him; even the violence with his troops could be, as far as you could know in the first two and a half hours of game-play, a misunderstanding in first contact. Thus the plot starts off weak, with a weak villain. Your main motivation is exploring the galaxy to find a home for your people, but it is a much weaker motivation than pursuing Saren and his horrible plans.

The game shines, however, in exploration. I'd dare say that it does exploration better than any previous Mass Effect game. Much better. It engages your Sense of Wonder in one of the best ways I have seen in a computer game. You explore an alien world right off the bat. It is a wonderful world, full of beauty and mystery. Full of alien stuff. My favorite part so far was exploring a dead alien facility, which reminded me of the Derelict in the original Alien film, though (un)fortunately there was no Xenomorph here. The environment is incredibly detailed. It starts off linear but later allows much exploration off the beaten track. This Sense of Wonder kept me hooked into the game for two and a half hours straight, which is uncommon for me these days.

I love the Scanner. It really drives home the Exploration theme, reminding me of the Tricorders of Star Trek fame. You scan all kinds of stuff in the world and get an analysis of them. This analysis is far from generic, at least so far. Very enjoyable and thematically appropriate.

I also think that, while the game failed to introduce a strong villain, it introduced Ryder in a much better way than the original game introduced Shepard. Ryder has strong roots in the setting, hook and connections. She has family ties, a father and a twin brother on board the Hyperion. Her father is a very detailed character, up to and including superstitions such as a "Lucky Rock", which your scanner ironically presents as a simple chunk of granite. NPCs talk with familiarity about her father. She is part of a crew and of a family. Unlike this, Shepard's background came up very rarely, in one mission in the original game, a few conversation mentions, and a very few e-mails in subsequent games.

Combat is also very enjoyable, though the new cover system takes time to get used to. NPC AI - ally and enemy alike - is wonderful. Your squad-mates act very well in combat. Enemies flank you. This compensates for the fat that, as mentioned above, you have little control over your squad-mates.

All in all, mixed but enjoyable experience. I am definitely hooked to this game.
Posted by Omer Golan-Joel at 12:21 AM 2 comments: 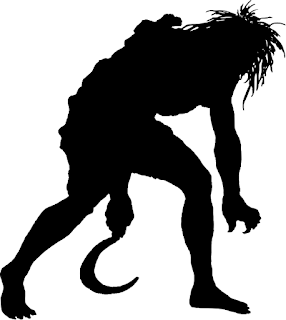 Those touched by the dread Lady Beneath - the Chthonic goddess Kassogtha - slowly fall into her embrace of eternal life-in-death. Dark rituals slowly turn the devout cultist into a half-ghoul - disfigured and malicious, slowly rotting alive towards death and "rebirth" in undeath. The cultist appears disfigured with lesions and blisters on his face and body; his fingers are elongated to resemble claws and his teeth grow into fangs. Half-ghouls often disguise themselves as plague victims and wear long robes and hoods to obscure their true nature.

The half-ghoul is not undead (yet) and thus cannot be turned and is still vulnerable to sleep, charm, and hold spells, as well as poison. He is, however, immune to disease. Unlike a true ghoul, he cannot paralyze with his bite, but he can still deliver vicious bites and rend flesh with his claws. When a half-ghoul dies, he will rise as a true ghoul on the next dusk unless he is decapitated, a stake is driven into his heart, or the spell bless is cast upon his body.

Half-ghouls are fanatics of their cult and much more willing to die for their rotten goddess than regular ghouls are. Kassogtha's dark blessing also imbues them with strength and resilience beyond those they had as normal men before they entered her unholy embrace.
Posted by Omer Golan-Joel at 9:19 AM 1 comment:

50 Wonders of the Reticulan Empire

50 Wonders of the Reticulan Empire! 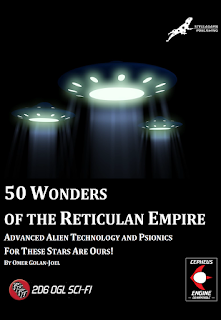 An advanced technology supplement for the These Stars Are Ours! sci-fi setting, also published by Stellagama Publishing. It uses the Cepheus Engine rules and is fully compatible with all other 2D6 OGL Sci-Fi games.

The Reticulan Empire is the richest, most powerful political entity in known space, outshining even its mighty Chiwak rivals. Millennia old, it has reached a mature and stable Tech Level 13. This technological know-how allows the Reticulans to produce marvels of advanced science beyond anything the Terrans can reliably manufacture. This booklet provides a sample of 50 technological and psionic wonders developed and used by the Reticulan Empire, from compact handheld laser "blasters", advanced cybernetics and gravitics, to the arcane psionic devices that unleash the power of the Reticulan mind.

If you are playing in a different setting than These Stars Are Ours! this product can serve as a resource for high-tech equipment available to mature interstellar societies. All technologies here will fit – with occasional minor adjustment – into any advanced TL13+ world or polity in any setting compatible with the Cepheus Engine or the 2D6 Science Fiction SRD.
Posted by Omer Golan-Joel at 1:08 PM 1 comment: