The Traveller: New Era (T:NE) setting offers many advantages for sandbox-style play, among them limited interstellar authority, an actual "hard" explorable frontier, and a good framework for adventure. However, personally, I care little for the T:NE "house system" rules, which tend to be more complex and less suitable to my tastes than Classic or Mongoose Traveller. So the question arises: If you want to play in the rich, dynamic Traveller: New Era setting, what ruleset would fit it? Somewhat ironically, I think that the Classic Traveller (CT) ruleset (as presented in the three Little Black Books and in the Traveller Book) fits this milieu perfectly. Let's have a look at some of the features of CT which work great with the T:NE setting or similar post-apocalyptic space-opera settings:

First, Book 3 world generation creates a very wide variety of worlds, usually very different from each other in technology and population, and sometimes having very strange combinations of starport, population and environment. Sometimes very low-tech worlds would sit right next to highly-developed ones. This makes less sense in a well-developed, stable Imperium than in the post-apocalyptic Wilds of T:NE. Why do so many worlds have TL 3-8? Because of the Collapse. Why are there higher-tech worlds around? These are recovering worlds. Why a Starport-A and TL-F but only 1,000 inhabitants? These are the last surviving people on a previously heavily-populated world, wandering the empty halls of their old starport and obsessively maintaining it in hope that, some  day, the Imperium will return. Why so many nasty dictatorships around? With the central Imperial government gone, each world went its own way, and many had to enact harsh measures to survive. So an "out of the box" subsector from Book 3 could be a perfect T:NE setting...

Second, it is easier to explain the heavy, low-tech-looking computers of CT in the framework of the T:NE setting than in the "golden age" Imperium. This works the same way as in the Battlestar Galactica remake from a decade or so ago: people have reverted to much lower level of electronics/information technology in order to make it difficult for AI enemies to infect ships. So you have compartmentalized computers and maybe even vacuum tubes and bulky primitive computers on ships, and bulky TL11 hand computers, working in such a primitive way to resist the Virus; any modern computer system would be a prime target for infection. Note that in my take on T:NE, the old Imperium had perfectly modern computers, and the bulky Book 2 computers are a new product of the New Era...

Third, Book 2 (and The Traveller Book) are small-ship rulesets. The big Imperium depicted in later CT products, as well as in MegaTraveller (MT), has very big ships. T:NE, on the other hand, reverts to a small-ship universe, as all, or most, big ships were destroyed in the Rebellion and Collapse - or worse. So, once again, a 1,200 ship is a battlecruiser and a 300 ton frigate matters in actual "big" combat. So, again, Classic Traveller and its "proto-Traveller" assumptions make perfect sense in the T:NE setting...

So how would I approach a hypothetical T:NE game using CT rules? I think that the best approach would not be using the Reformation Coalition, though this is a good option, but rather roll up a new two-subsector Traveller sandbox, using the general T:NE setting ideas but using or ignoring Traveller canon as it fits the setting; I think this will work better for CT to roll up two new subsectors rather than "convert" official subsectors into the New Era using the T:NE or the T:NE: 1248 conversion rules. The rest would be constructing the specific setting as desired... And using all the good bits from T:NE (such as the detailed government ratings from Path of Tears).
Posted by Omer Golan-Joel at 1:13 AM 1 comment:

On the Beauty of Classic Traveller 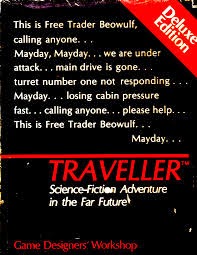 Classic Traveller. The game that started it all. One of the first SFRPGs in history. Sure, it is rough around the edges, and its rules have many "holes" in them (vehicle combat comes to mind), but the game itself is a thing of beauty, from both a game design and an old-school play perspective. It is a work of art; returning to it after playing many other and newer games is refreshing. But to truly appreciate it, one must see it as its own game, maybe even take the first three Little Black Books (or the Traveller Book which is an edited and improved version of them) as their own thing, apart from later, supplemental Classic Traveller or later Traveller rulesets.

So what is the beauty of Classic Traveller?

The beauty of Classic Traveller is a character sheet which is a few rows of text on an index card, smaller in size even than the typical old-school D&D character sheet, yet describes a complete character. From these few stats, randomly generated, one can infer a very interesting and complete character, all without needing too many rules to reference. HERE is an example of such inference from the Ancient Faith in the Far Future blog - the character is three short rows, yet the experienced player, or Referee, can easily extrapolate much background and personality details, enough for years of play.

The beauty of Classic Traveller is generating a complete character in 5 minutes (believe me, I've tried this with a timer). Sure, your character may die during chargen. But who cares? You "wasted" a few minutes of your life playing a game. No harm done - five minutes more and another character will spring forth. All of this while allowing for much diversity of characters.

The beauty of Classic Traveller is building a starship in twenty minutes; this starship has no "stat block", but rather a paragraph of readable English text, which is enough to run it. Much variety is possible, and the "building block" simplicity of the ship creation system allows for the Referee to quickly add new components (say, hydroponics, a shipboard hospital and so on) to Book 2 ships. One ship in a paragraph - this is beautiful, especially when compared to the long strings of hex digits serving as the "stat blocks" of ships in later iterations of Traveller.

The beauty of Classic Traveller is that a mere 2-3 pages of tables create a wonderfully complex world of weapons, each with its own nuances, each fitting a niche. No need for ultra-complex penetration rolls; all is included in these simple tables. CT weapons have their own "character", and their own uses. The emergent complexity here is breathtaking.

The beauty of Classic Traveller is that a few digits define a world, and are enough to infer much from them, all while allowing for much nuances and for an endless variety of worlds. The stats suit adventurers and their needs - What starport services are available? Can I take my laser rifle ashore? Which politics will I have to deal with? Can I breath the air? Can I refuel from oceans/gas-giants/glaciers? All of this is very quick to generate and very fun to infer from.

A beautiful system, isn't it?
Posted by Omer Golan-Joel at 5:20 AM 8 comments:

What the Traveller: New Era setting got right for Sandbox Play 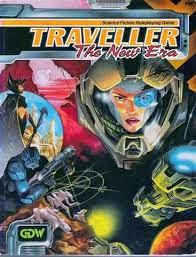 Traveller: New Era (TNE) is reputed to be a controversial version of Traveller; from what I've heard, when this game was released back in 1993, it split the fan-base, as not all players were content with the significant changes in the setting, not to mention a new and different ruleset (the GDW "house system" also used in Twilight: 2000). Indeed, much criticism has been leveled at the Virus - a self-replicating cyber/bio weapon capable of taking over most computerized system and the reason for the TNE post-apocalyptic condition, as well as at the departure from the "Golden Era" milieu of Traveller (or its Rebellion extension). In this post, I will avoid the subject of the Virus for the most part, though I will mention some of its impact on the setting. Instead, I intend to talk about a few key elements of the New Era setting, which I consider to be very good for the game, especially for a sandbox game, regardless of the ruleset (which I do not care much for).

The first is the removal of the over-powerful overbearing interstellar government (Imperium) of late Classic Traveller and of Megatraveller. While the Imperium, indeed, is a well-loved setting among many fans, it does have its limitations, especially in its "modern" form - a very powerful, omnipresent government holding multiple multi-kton battleships in every subsector. This (the "Golden Era" and the Rebellion) is a setting where many elements are far beyond the reach and influence of players, and players typically are pretty low on the political foodchain. The "endgame" elements of a sandbox - that is, influencing planetary and interstellar politics and maybe even establishing a pocket-empire ruled by the PCs - are very difficult to pull off with interstellar "big government" and big corporations running around. TNE removes them, albeit in a very brutal and total way, but suddenly there are much less "big boys" running around and either foiling the PCs plans, or making them redundant. Less authority figures around is a good thing for a sandbox, as it makes the PCs important, and makes their decisions meaningful. Even when governments ARE involved, they are much smaller affairs than, say, the Megatraveller factions, and thus much more amenable to PC influence.

The second, and related point is the opening up of a real frontier for actual exploration. A recurring problem with the "Golden Era" was that, unless you used semi-canonical peripheral regions such as the Outer Rim Void of A4: Leviathan fame, there wasn't a "hard" frontier to be found. Sure the Spinward Marches were a relative frontier, but they were fully explored and fully known, all a developed, or semi-developed, part of an existing interstellar empire. TNE wiped the map clean, and now whatever polity the PCs are part of (say, the Reformation Coalition) has a "hard" frontier around it, and, beyond it, vast tracts of space which is either unexplored for 70 years, or very minimally explored. So you can boldly go where no man has gone before.

The third is having an actual framework for adventure. The PCs are, by default, Space Vikings - government-sponsored explorers, raiders and privateers out to explore, and loot, the Wilds. This is somewhat akin to the "dungeon crawling" of old-school D&D - PCs are out there to recover treasure, make a name for themselves, and, eventually, topple tyrants and leave their mark on the setting. This also allows for "treasure" - high-TL goods recovered from dead 'boneyard' worlds and from regressed colonies. In a sandbox, this is very useful - PCs have a motivation to take risks, to explore, and to interact with the setting and with its factions, and it is also very easy to explain why a very diverse group of PCs work together on one starship (they are all out to get rich from off-world plunder). this becomes even better with a built-in patron for the PCs - the Reformation Coalition Exploration Service (RCES), who may provide adventure hooks and assistance, all while being unable to have a significant level of control over the PCs during the adventure itself (resources are limited, and, outside of the Coalition itself, interstellar government, or even significant RCES oversight, are very rare).

With the three elements above, TNE allows for many sandbox gaming possibilities, for exploration and for meaningful PC influence on the setting, all of which are very good things.

(Last but not least, on a side-note, TNE finally gave us a reason why Traveller computers, robotics and cybernetics were limited in scope and very bulky (other than the game being published in 1977, that is) - the reason given in the new (2000's) Battlestar Galactica. In other words, people deliberately opt for very primitive electronics to keep Virus infection risks at a bearable minimum.)
Posted by Omer Golan-Joel at 5:55 AM 1 comment: