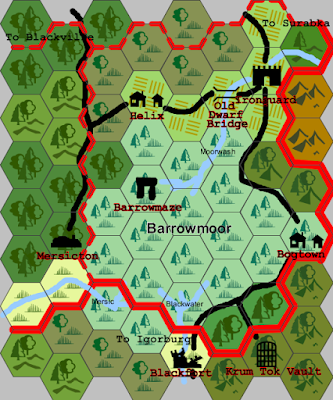 As you may have noticed, I have integrated Greg Gillespie's Barrowmaze into my own Camalynn EY1666 setting.

Barrowmaze's Duchy of Aerik becomes Aerik County. It is one of the four counties ruled by the city-state of Surabka (to the north of this map). The map also shows the neighboring Mersic County (administered from Mersicton) and lands (to the south) controlled by Surabka's rival city-state, Igorburg (to the south of this map). There is also an autonomous Dwarven colony, the Krum Tok Vault, nominally a vassal of Igorburg.

Between EY (Elysian Year) 1647 and EY 1651, Surabka and Igorburg fought a bitter war. The main battlefields were in Aerik County and its environs. Krum Tok stayed mostly neutral, only paying taxes to Igorburg to finance the war effort; fighting destroyed the fortified Igorburgian town of Blackfort. Bogtown was the site of another battle, and two battles occurred inside Barrowmoor itself - the First and Second Battles of Barrowmoor. Remnants of battle and bodies - some say, also spirits - of the fallen are common in Barrowmoor, both near Bogtown (where the First Battle of Barrowmoor took place) and directly to the south of the Old Dwarf Bridge (where the Second Battle of Barrowmoor took place).

Worse still, the Yellow Plague swept through the County in the fateful year of EY1659, further depopulating the area and leaving many disfigured.

The result is a devastated, depopulated County, on the beginning of its very long road to recovery. It has three things going in its favor: fertile lands in the County's northern edge; the strong - and virtually untouched - mining economy of Krum Tok, and *drumroll* Barrowmaze itself. The horrid barrow-mounds began attracting adventurers and grave-robbers in the post-War years, as deserters from both armies came home with major treasures and rumors of horrid monsters. Helix, once a peaceful peat-digging and farming community, grew into a rich "boomtown" with adventurers, tomb-robbers, and assorted scum flooded it, as roads from Helix to Barrowmaze are better explored than those from Mersicton (which also saw growth in light of this adventuring craze).

Surabka rules an area of 123 6-mile hexes, a little less than 4,000 square miles. In ACKS terms, it is a mid-sized Duchy, though its ruler calls himself a Prince. Following the plague, average population is 50 people per square mile, or 300 families per 6-mile hex, for a total of approximately 37,000 families.

This is an advanced, urban realm, like the rest of Camalynn, technologically similar to the earlier part of Terra's early modern period. It is also highly centralized around the city-state of Surabka. This means an urban population of 7,000 families, with Surabka itself being home to 4,500 of them, being a Large City (Class II Market). The other 2,000 urban families are distributed between the various settlements, primarily the county seats.

The Duchy of Aerik suffered war and plague and is depopulated. On paper, it has an area of 35 6-mile hexes (approx. 1,000 square miles), making it huge for a county. However, it is mostly uninhabitable Moor. Thus, average population density is 30 people per square mile, 180 families per 6-mile hex, and a total population of approximately 6,300 families. Of them, 950 are urban families; 600 of them live in the fortified county seat of Ironguard, which is a Large Town (Class IV Market) 150 in the devastated Bogtown, a Village (Class VI Market), and 200 in Helix, another Village. However, Helix's "boomtown" economics "upgrade" it to a Class V Market.

Mersicton is the county seat of Mersic County, which has an area of 29 6-mile hexes and an average population of 40 people per square mile, or 250 families per 6-mile hex mostly working in forest-related agriculture. The total is approximately 7,250 families, of them 800 live in urban settlements, of which the largest is Mersicton, a small town of 500 families (Class V Market). Mersicton sees some economic growth from the Barrowmaze "industry", but not as much as the more accessible Helix.

Krum Tok Vault, a Dwarven colony and a nominal (though very autonomous) vassal of Igorburg, controls 19 hexes, mostly of mountain and forest country, an average population of 40 people per square mile, or 250 families per 6-mile hex, for a total of approximately 4,750 families. They are centralized mostly in the industrial town of Krum Tok, surrounding the Dwarven vault, with an urban population of 700 families, of them 475 in Krum Tok, making it a Small Town (Class V market).
Posted by Omer Golan-Joel at 12:40 PM No comments: