The Space Patrol - now in Print! 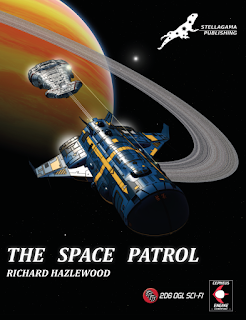 ACKS adventure idea: The Rot Beneath 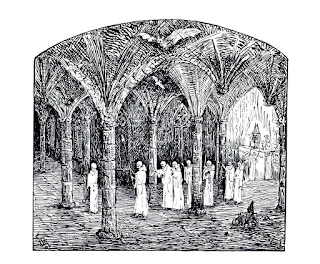 I had an interesting idea for a short, self-contained adventure module (for 3-6 characters of levels 1-3) for the Adventurer Conqueror King System (ACKS). It should have an "integrated design", that is that the above-ground "town" area will directly correspond to the dungeon levels beneath it and interact with them.

Centuries ago, St. Marcus of the Hammer smote down an Abomination of Desolation - an idol of the dread Chthonic plague goddess Kassogtha. Knowing that such edifice of Chaos can never be fully cleansed, St. Marcus erected a monastery ("Fortified Church" in ACKS terms) over the old Chthonic manse to guard against its corrupting influence. When neared death, he willed that his hammer be interred in a crypt deep beneath the monastery's chapel and that his skull be coated with gold and placed in a reliquary inside the chapel itself in an eternal vigil against Chaos. When his companions - a studious mage, a repentant thief, and a mighty fighter - died, the monks buried them alongside St. Marcus in his underground crypt.

Years passed. The Empire St. Marcus knew prospered and expanded and then declined and receded. What was once an important monastery declined as well, led by lesser men. Then, in the days of Imperial collapse, the Plague arrived. First came the fever, then the pus-filled blisters. For three out of four victims, death then followed. The survivors often emerged hideously disfigured. The monks of St. Markus prayed to Sol Invictus and invoked their Saint, but no help came. Even their abbot, a devout but simple man, lacked the divine grace necessary to cure disease. Instead of the Unconquered Sun, another voice answered them, whispering in their darkest nightmares. The whispers promised a respite from the Plague, as well as a road of immortality paved by embracing pestilence rather than suffering from it.

At first, the monks resisted and called upon their god to protect their souls from such creeping vileness. However, the temptation of eternal life, of an end to their suffering, blackened the hearts of weak-willed monks. The particularly charismatic, if cowardly, Brother Pavel became their leader. Under the nose of the old and unsuspecting Abbot, they dug under the monastery's cellars and broke the seals to the ancient Chthonic manse. There they found the statue of the "Lady Beneath" - Kassogtha. Enthralled by their lust for immortality, they repaired the abominable idol. At first, they sacrificed animals to it, but no answer came. Then they murdered their fellow monk, Brother Clarence, and rededicated the idol with his blood.

A blessing they received indeed - the dark kiss of undeath. In that horrible ritual, Brother Pavel became a Ghast - though he retained his Clerical abilities and insane mind. His followers became ghouls. Brother Pavel could not ascend to the surface again, lest his rotten nature be exposed. His ghoulish followers, however, could easily pass their hideous nature as a particularly dire result of surviving the Plague.

A year passed and the Plague was long gone, leaving behind disfigured survivors and the lucky few who were immune to the disease to begin with. New people moved in to replace the dead. The rotten cult, however, festered in the darkness beneath the Monastery of St. Marcus. There they used an underground stream to bring in wanton wenches from the nearby Village of St. Marcus to participate in debauched celebrations, a few yards of earth below their unsuspecting former Brothers who still kept faith in Sol Invictus.

The cult's goal is to have this underground blister of Chaotic puss burst and corrupt the entire monastery and village in an orgy of carnage to honor their goddess. However, three things stand in their way. The first is the chapel, where St. Marcus' skull resides, ever watchful against such Chaos; into this hallowed ground the ghouls cannot enter, as the fear of god drives them away. Second is Abbot Kasimir, an old but faithful man whose very presence is a thorn in Kassogtha's side. Third is The Hammer of St. Marcus, buried with his bones in the deep crypts, instilling fear in the ghoulish cult.

Thus they have formulated a plan. First, they will invite the prostitutes one final time into their warrens - this time to butcher them as part of a dark ritual. This ceremony will cause a minor tremor underneath the chapel which will shatter the gilded skull and break the chapel's sanctity. Second, they will kidnap the Abbot and murder him as an offering to their vile goddess, turning the small Shadowed Sinkhole of Chaos at the chthonic manse into a Blighted Sinkhole of Chaos encompassing the entire monastery and slowly extending towards the village. Finally, with their dark influence spreading throughout the catacombs, Brother Pavel will be able to enter the Crypt of St. Marcus and corrupt his hammer into a Chaotic artifact.

The player characters will arrive two days before the first stage of this plan. Their hook could be an urgent letter from the Abbot to the (player's) Cleric's superiors requesting urgent help as he senses a great evil shadowing his monastery. It could also be rumors of a great treasure buried in catacombs underneath this monastery. The PCs might even be local youths from the Village of St. Marcus drawn into the event when a friend or younger sibling of one of them goes missing (is sacrificed to Kassogtha by the cult).

The adventure has a timeline which will happen unless PCs disrupt the cult's activity:

Ignoring such clues and taking an over-cautious approach might bring bad outcomes.

The dungeon itself consists of the following:

Level 0 (above-ground): The Monastery of St. Marcus with all its facilities. "Friendly and Safe Area", at least until Night 3.
Level 1: Monastery cellars; chapel undercroft.
Level 2: Catacombs; crypts; underground waterway (the monastery's well ends here); cult quarters.
Level 3: St. Marcus' Crypt and the Manse of Kassogtha, seemingly unconnected on this level (though there is a secret tunnel connecting them).

Rats - no level 1 adventure in a cellar is complete without them; possibly some other vermin as well
Skeletons and zombies - animated by the cult
"Half-Ghouls" - juniour cultists in the early stages of their transformation
Ghouls - cultists
Ghasts - cultist priests
Brother Pavel - cult leader: Ghast + level 3 clerical abilities
Posted by Omer Golan-Joel at 7:31 AM 5 comments: 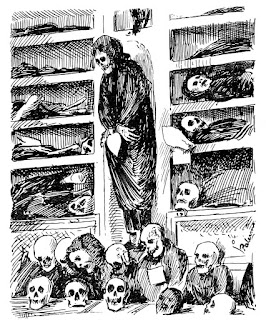 I was thinking about this as of late and... I came to the conclusion that the Evil Sorcerer sword & sorcery archetype, in ACKS terms, is a Chaotic Cleric.

The archetypal Evil Sorcerer wants power, he wants a lot of it, and he wants it NOW. He has no patience for study or for solemn prayer. He will pay any price he needs to pay to get power.

Mages don't have easy access to power. They must dedicate their lives to hard, patient study. This is reflected by their steep XP requirements and neglect of any other character aspect other than Arcane Magic. This is not what a Sorcerer wants.

Chaotic Clerics, on the other hand, advance quickly. They can fight almost as well as Fighters do. They get their spells automatically without having to look for a spellbook or performing research. They get all the spells and do not have to learn new ones. No restrictive repertoire to deal with. They even get necromancy better than Mages - they have Animate Dead as the reverse of Smite Undead as a level 4 spell while Mages only get it as a level 5 spell, and they also get to control (charm) undead, which no Mage can do.

So Evil Sorcerers are Chaotic Clerics!
Posted by Omer Golan-Joel at 2:00 PM 2 comments: