In case you haven't heard the news, the wonderful guys at Dezowave have officially released S.T.A.L.K.E.R: Lost Alpha. This is essentially a remake of S.T.A.L.K.E.R: Shadows of Chernobyl, with A LOT of extra content, rebuilt from an early alpha build released by the original developers. Lost Alpha is a standalone game, and, best of all, it is free! Go grab it HERE! A must to all post-apocalyptic gamers and everyone who enjoys sci-fi and first-person sneakers and shooters!

NOTE: The first release has some serious bugs, but Dezoware is hard at work on a patch which will solve all of these, which is due on Mayday (i.e. in 3 days). I recommend waiting until the patch release before playing the game.
Posted by Omer Golan-Joel at 11:19 AM 4 comments: 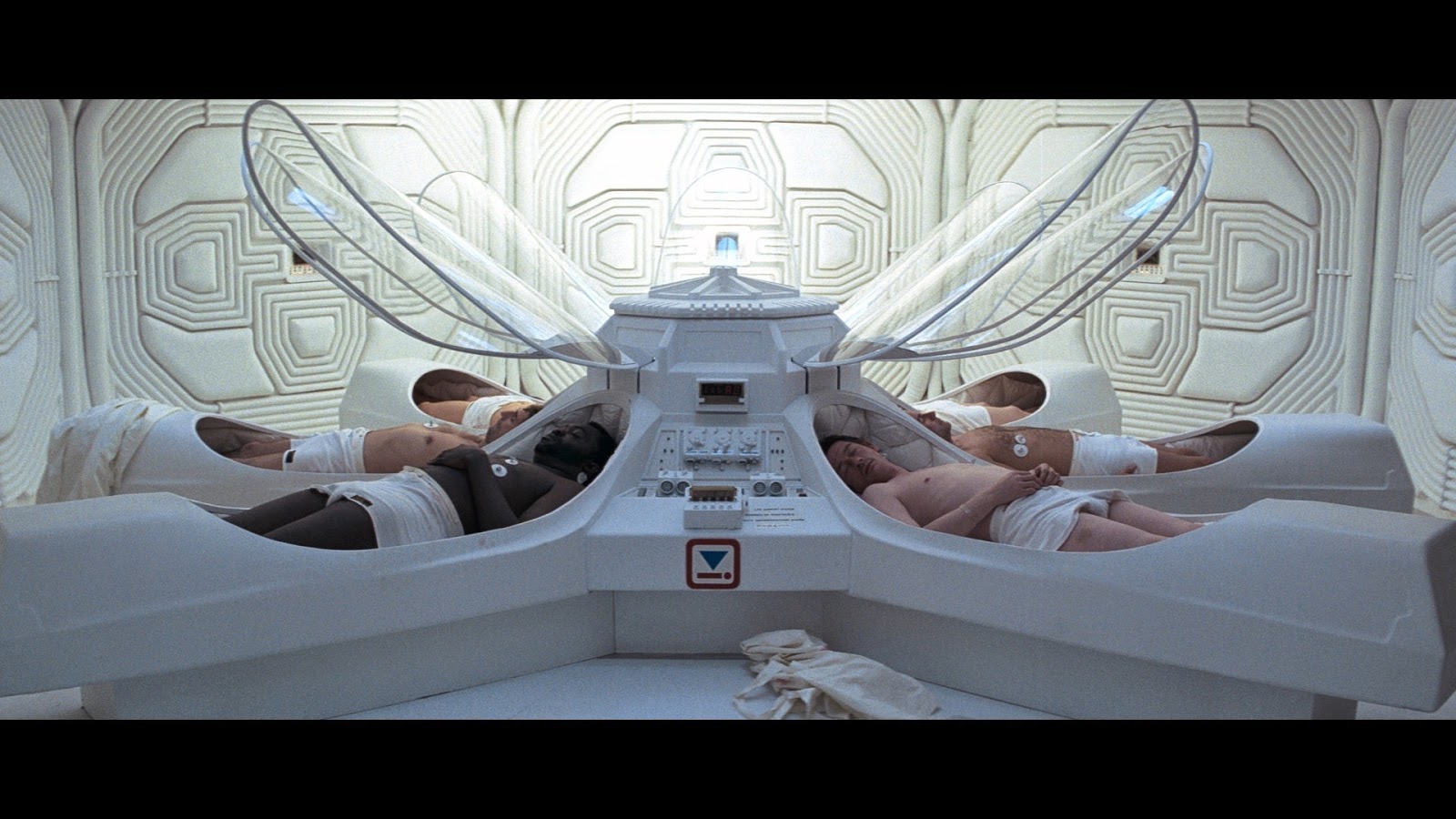 Classic Traveller's Low Berth rules make cold-sleep dangerous: upon reviving a Low Passenger, you roll 2d6 (+1 if a Medic is present, -1 if the passenger has Endurance 6-); on a roll of 5 or less, the passenger dies from Low Berth malfunction. This fits a low-tech, interstellar mass-colonization milieu well - with huge ships packed with cold-sleeping colonists, hoping to reach the stars, some of whom will never live to see their destination. Under these conditions, the desperate will risk certain death (a 16.7% death rate even with a medic present) in hope of leaving an overcrowded, polluted Earth for a better job amongst the stars. However, in a higher-tech setting, it makes less sense to have such a risky way of passage aboard a commercial starliner, even if (as in Classic Traveller) no liability or refund is allowed for by law. At least in the big star-lines, that is.

So what I have in mind is a variant rule for Low Berths under CT rules. At Tech Levels 8-10, low berths function JUST AS UNDER THE CLASSIC TRAVELLER RULES. At TL11+, however, they are much safer. If one follows the standard procedure, that is.

Properly preparing a passenger for Low Passage takes 1d6 hours and requires the presence of a Medic (Medicine-1 or better skill). One Medic may simultaneously work on up to 20 Low Berths. When this procedure is used, revival occurs at no DM.

It is also possible, in the absence of a Medic, or when time is pressing, to initiate Emergency Low Sleep. This takes 1 minute (4 combat rounds) to complete, and may be initiated either by outside controls, or by an override switch within the Low Berth itself. The downside of this is that revival, either using the standard procedure or emergency revival (both described below), is at a -2 DM.

Standard Revival takes 1d6x10 minutes and requires a roll 2d6, +1 DM if a Medic is present (again, up to 20 passengers per Medic), -1 DM if the passenger has Endurance 6-. A roll of 5+ is required for successful revival. Failure does not indicate death, however, but rather 3D6 wounds, taken under the First Blood rule (i.e. all from the same characteristic and may overflow to other characteristics). These are treated as any wounds. So a healthy character (with a sum of the physical characteristics of 18 or more) will never die from cryo-shock, though a sickly or wounded character would be at a much greater risk.

Emergency Revival is also possible.This takes 1d6 minutes and can either be triggered by the Low Berth's controls or activated automatically in case of power failure. This uses the procedure outlined in the Classic Traveller books, including the risk of death, BUT does not allow for the +1 DM for the presence of a medic. Note that emergency revival following emergency low sleep is HIGHLY DANGEROUS, and has a 58.3% risk of death (!). The human body should not be handled so roughly!
Posted by Omer Golan-Joel at 6:43 AM 2 comments:

Among the various things Classic Traveller is notorious for, it is well-known for its simultaneous combat. In essence, all combatants in a Classic Traveller fight act at once, which could be confusing, especially for the players of newer games, who are used to sequential initiative. So you think that Classic Traveller has no initiative system? THINK AGAIN!

So, in essence, when one character is trying to shoot BEFORE another, roll 2d6 for each side, and add THE WHOLE DEXTERITY SCORE. The one with the highest score acts first ("has surprise").

Thanks to the posters mike wightman and Supplement Four from the Citizens of the Imperium Boards for pointing this out.
Posted by Omer Golan-Joel at 1:22 AM No comments:

A dragon* has been spotted in Rehovot, Israel where i live. I don't think he flies of breathes fire, but he is sure to be a VERY big one. 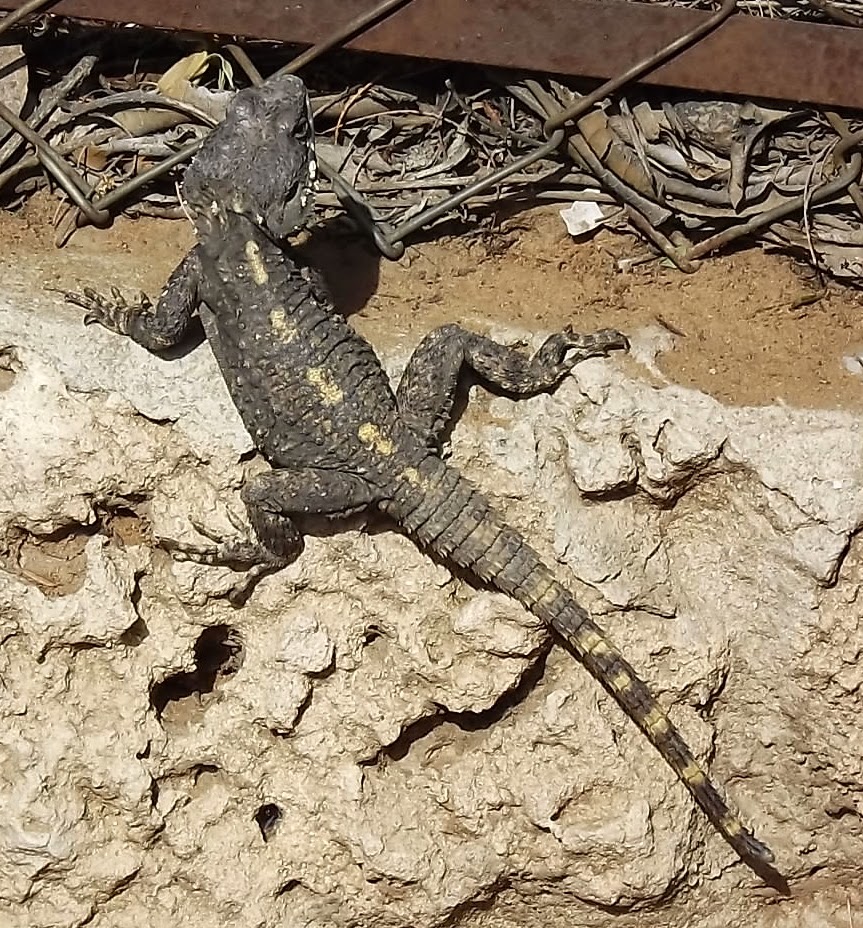 *In case you wondered, this is a wild Painted Dragon (Stellagama stellio), also called a Starred Agama, and this individual, a dominant male, is a particularly large specimen - about 30cm long. For this species of lizard, this is about how big they can get. They feed on insects, particularly ants, as well as meaty leaves, and flowers (they like yellow flowers particularly). This is also a relative of the Bearded Dragon from Australia, which is a common pet in many developed countries.
Posted by Omer Golan-Joel at 9:39 AM No comments:

Lost my Day Job to Cutbacks; Going for some Gaming Work

I am sorry to report that I have lost my day-job, in translation and editing, to cutbacks at the company. As of April 13th, 2014, I'll be without a formal day job, until I'll find a new one. HOWEVER, I am now working on a BIG gaming contract for Autarch, namely Barbarian Conqueror King, a Sci-Fantasy/Sword & Sorcery/Sword & Planet supplement and setting for ACKS (Adventurer Conqueror King System).
Posted by Omer Golan-Joel at 6:42 AM 4 comments: