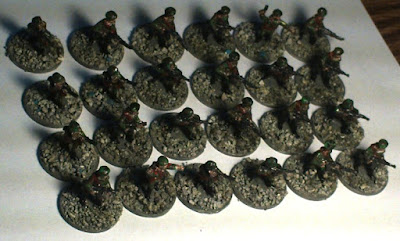 Posted by Omer Golan-Joel at 6:16 AM No comments:

Posted by Omer Golan-Joel at 3:37 PM No comments:

USE ME 15mm sci-fi wargame rules

I came across USE ME (which stands for Ultra Simple Engine for Miniature Engagements) quite accidentally, while checking the 15mm.co.uk site for new miniature releases. However, as I am quite interested in fast, rules-light games - both RPGs and wargames - USE ME caught my attention, especially since it seemed as a promising candidate for a mean through which I could introduce my spouse (already and RPGer) to tabletop wargaming. Also, the price was right: 6 UK Pounds including shipping, which is about $10; so, even if I would've ended up with a ruleset I didn't like, the risk of purchasing it wasn't THAT significant. So I ordered it.

I've received USE ME three days ago and read through it. This is a tiny, thin booklet of 32 A6 pages, out of them the basic rules take only 14 pages (introduction included!). And the rules are as simple as promised on the site, using only a single d6 for each roll and having a very small number of tables. I've already memorized most of the rules, except for some of the modifiers, but for that I've created a quick-reference sheet which fits nicely on an A5 page.

The rules themselves are very simple and straightforward. Each unit (called "character" in USE ME) has a type (infantry, light vehicle, heavy vehicle or super-heavy vehicle), a weapon type (sidearm, rifle etc) and an ELAN rating. The latter (ELAN) is a simple rating going from 1 (bad) to 6 (great) denoting the character's overall quality - encompassing things such as training, morale and so on into a single digit. ELAN influences a lot of things in USE ME, but first and foremost the order in which units are activated - they are activated from the highest ELAN to the lowest, with initiative (1d6 vs. 1d6) determining which side can activate first at each ELAN rating present on the table. Characters can act twice per activation, and can choose freely between action types for each action (for example, move and shoot, shoot and move, move and melee, shoot twice or move twice), with double actions of the same kind (e.g. shotting twice) incurring a minor penalty. Note that all unit types - infantry to super-heavy tanks - use essentially the same rules in this game, which is a good thing.

Ranged combat is simple as well - the attacker rolls 1d6 (plus or minus modifiers for ELAN, range and so on), and if the modified result is 4 or more the shot hits. If it hits, an opposed roll of 1d6 by the attacker vs. 1d6 by the defender is rolled for penetration, modified by the attacker's weapon and the defending unit's type; units can also be armoured for added protection. Depending on the penetration roll, the target could be unaffected, winged (i.e. lightly wounded), struck (i.e. severely wounded) or killed outright. The two wound types can be marked with markers placed on the table next to the miniature or on its base. Melee uses the same procedure, but hits are automatic (i.e. you only roll for penetration) and the defender gets a free counter-attack.

Characters could also be grouped into squads, which makes their activation, movement and targeting a bit simpler when using a large number of miniatures in the same scenario. Squads have a squad leader, and all movement and targetting uses the squad leader instead of measuring the distances for each and every member of the squad.

Simple rules for off-table support (including ortillery, that is, orbital bombardment of your gaming table!), for multi-battle campaigns, for snipers and drop-troops and for solo play. A simple (two A6 pages) point-buy force-building system is also included.

All in all, USE ME feels quite completely, especially when you consider its size. While I haven't tried it out in play yet, I get the feeling that it lives up to its promise of being a simple, fun, straightforward ruleset for miniature games.

There are a few drawbacks to USE ME, however. First and foremost is the lack of any morale system (though ELAN is said to encompass morale, among other things); characters will fight to the death no matter the odds, which is not very realistic unless you're using armies of robots or bugs. Also, the system seems to be geared towards typical, rifle-centric troop engagements, lacking specific rules for more unique weapons such as flamethrowers, submachineguns, shotguns and man-portable rocket launchers. But the good thing is that, with such a basic, generic framework of a system, you could easily solve this problems with a few very simple house rules (e.g. roll under ELAN on 1d6 for morale).

The rules are advertised as being generic sci-fi, but I think that they could be very easily used for any modern (i.e. 1900+), post-apocalyptic or near-future game. I might even be planning a WWII game using these rules, set in Stalingrad!

The bottom line is that if you're looking for a simple, fast, beer-and-pretzels system to have casual wargaming with, USE ME is a perfect match. If you're looking for something more complex and/or realistic and/or simulationist, you should look elsewhere, such as F.A.D.
Posted by Omer Golan-Joel at 6:56 AM No comments: