I've finished painting the miniatures representing a platoon of the Kedeshian Death's Head Regiment from my Canopus setting. The minis are Eureka Miniatures 15mm Sci-Fi Stormtroopers: 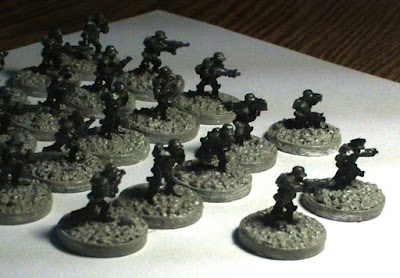 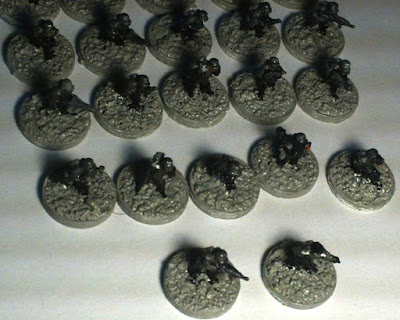 Posted by Omer Golan-Joel at 2:35 PM No comments:

I've improved my 15mm Armed Gunmen, adding gravel to their bases and applying matte varnish to the whole minis:

I've come up with a nice side-project to me to try my developing modeling skills on: a sci-fi wargame milieu set on Mars in the early 2200's. Mars was first colonized by Humanity in the late 21st century, and an ambitious terraformation project began in the early 22nd century. Now atmospheric pressure has risen to a sufficient level to allow Humans to walk on Mars with only cold-weather clothes and a breather mask (which scrubs the excess CO2 out of the air and then condenses the air to a breathable pressure). But the terraformation process has awakened... Something.

For centuries there were rumors about something unnatural existing in Cydonia. However, the first explorations found nothing there but weathered hills and a lot of peramfrost. But a flash-flood caused by the terraformation effort (and a Free Mars sabotage of a major terraformation facility) swept much of that permafrost away, revealing a landscape of alien ruins long buried under the red sands.

And then... Something inside the ruins awakened, an ancient distress beacon. And on a distant world, the signal was received.

And now they have come to Mars to take back what was theirs millenia ago. But of course, the Earth Consortium would never allow them to do that. And so begins the Mars war.

On one side are the Earth Force Marine Corps, Humanity's best, defending Mankind's largest interplanetary colony from the alien threat, and also doing its utmost to keep Mars well within the Earth Consortium's iron grasp. Equipped with advanced rifles and combat space suits, these brave men and women are trained to fight in any environment in the Solar System, and they will fight well on Mars as well.

For them I'll be using Rebel Minis 15mm Earthforce Marines, which I have at hand, based and primed but not yet painted: 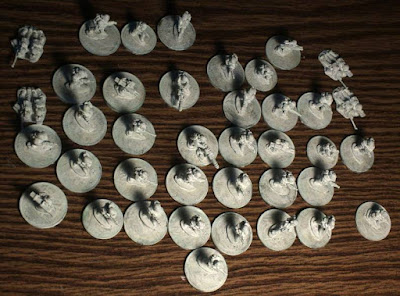 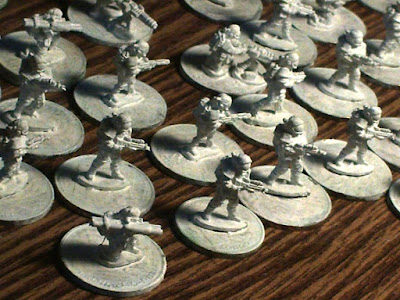 On the other side are the Grays, who once, in the previous incarnation of their civilization, have colonized Mars and tempered with Humanity's evolution. Now they are back, riding their silvery saucer-shaped starships and totting laser and plasma weapons. They have used biotechnology to adapt themselves to the Martian environment, and can breath on the Martian surface without needing a mask. Their technology, however, is but a fraction of what it was before their Long Night; they yearn to take once again possession of the Lost City of Cydonia and unlock its technological secrets.

For them I'll use one of the 15mm Gray lines of miniatures, most likely the Grays done by 15mm.co.uk, which I quite like. I haven't bought them yet, but they are definitely in my to-but list.

On the third side is Free Mars, the independence movement founded by the original Human settlers of Mars. Their aims are to throw off the yoke of Earth Consortium domination and make Mars an independent state. While their equipment is outdated, they know the lay of the land very well and use the terrain to their advantage.

For them I'll use Rebel Minis 15mm Sahadeen, with their robes and hoods colored in a rusty shade. I haven't bought them yet, but they are in my to-buy list.

And in the middle are the newer colonists, Earthers who came to Mars to seek their fame and fortune and to escape the crowded, polluted mess which is Earth. The EFMC's sworn duty is to protect these civilians, while the Grays see them as Humanity's soft belly to be terrorized (or abducted to serve as guinea-pigs in their experiments) and Free Mars tries to recruit them to its lines.

For them I'll use unarmed 15mm miniatures in space suits, most likely from GZG.

The fun part is going to be terrain: sure, I'm going to buy a red tablecloth to put on the gaming table, but making pyramids, alien crystals and a "face" would be loads of FUN! I'll also make colony domes and other structure.

And of course, everything I'll paint or build for this project is going to be useful for Traveller games! :D
Posted by Omer Golan-Joel at 12:37 PM No comments:

I've improved my Draco Infantry miniatures, adding gravel to their bases and applying matte varnish to the whole minis.

Here is the result:

Back to the Hobby!

After several months of trouble and pressure in real life, I'm pleased to say that I'm finally back to the gaming hobby, and will resume updating this blog.

Today I've painted ten 15mm Giant Ants from Khurasan Miniatures. They are very useful as they can be very easily used as stand-ins for all sorts of bugs, from Giant Spiders in D&D to the Chamax in traveller.