Here is a list of the Chaotic/Chthonic Gods of my Barbarian Conqueror King setting with all their different names across cultures.

Now on to the languages and naming systems of Barbarian Conqueror King. 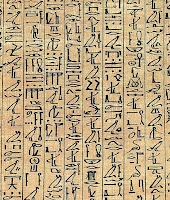 Most people in Kanahu speak Kinhan, which replace the "common" language in this setting. It has a written alphabetic system, an innovation which was adopted by the neighbouring lands of Enyom and Queddar and even by the commoners of old Sakkara, as it is far easier to learn and use than the High Sakkaran hieroglyph system. In "metagame" terms, this is similar to Semitic languages, so most place (and person) names should sound Semitic (or at least fitting to the Bronze Age Levant).

The people of Enyom speak the Enyomi tongue, which is closely related to Kinhan; anyone who knows Kanahi can understand simple sentences said in Enyomi on a proficiency roll of 11+ (Intelligence bonus applies) and the other way around. Enyomi uses the Kinhan alphabet. In "metagame" terms, Enyomi names should also be vaguely Mesopotamic.

The humans of Quedar speak Quedari, which is more distantly related to Kinhan and Enyomi and uses the Kinhan alphabet. anyone who knows Kinhan or Enyomi can understand simple sentences said in Quedari on a proficiency roll of 18+ (Intelligence bonus applies) and the other way around. In "metagame" terms, Quedari names should sound vaguely Arabic.

The Gecko-Men of Queddar speak their own language, which sounds like a combination of chirps and clicks. It uses a strange variant of the Sakkaran hieroglyphs for its religious texts, and a variant of the Kinhan alphabet for secular writings.

Sakkara has two languages - High Sakkaran and Low Sakkaran. High Sakkaran is the language of priests, royalty and sorcerers, and many sorcerers in other Human lands use this as well. It uses very complex hieroglyphs, which are difficult to master. Low Sakkaran is spoken by most Sakkaran commoners, and uses the Kinhan alphabet. In "metagame" terms, names in both tongues should sound vaguely Egyptian.

The Lizardmen of Punt, as well as its small Human population, use three languages - the Red Tongue (spoken by priestesses), Green Tongue (used by most Lizardmen) and Blue Tongue (spoken by sorcerers). All three share the same hieroglyph system. In "metagame" terms, Lizardmen names should sound vaguely Mesoamerican.

The Men and Lizardmen of Mala speak Malan, a language distantly related to the Green Tongue. This language has no written equivalent, though the few literate Malans speak and write in the Green Tongue of their neighbours.

There are two more languages in this setting: Serpentine, which was once used by the Serpentmen and now rare (uses pictographs); and Chaos-Tongue, which is used by various Beastmen & cultists (has no written equivalent).
Posted by Omer Golan-Joel at 11:03 AM No comments:

The Lizards of Kiryat Tivon

My mother lives in Kiryat Tiv'on, Israel, a small town not far from Haifa. Her house is situated near the wadi (valley) and in a lightly forested area, so there is quite a good amount of wildlife there, including reptiles. Here are a Mediterranean House Gecko and a Rough-Tail Rock Agama I met at her home yesterday and today. All are wild animals who have colonized my mother's house and backyard. 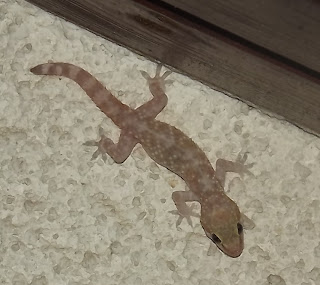 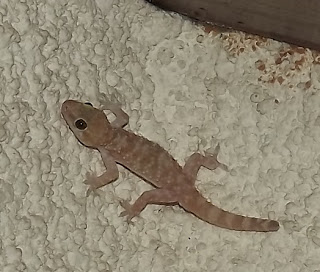 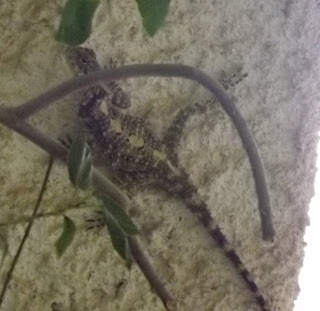 Posted by Omer Golan-Joel at 4:23 AM No comments: