Keith over at Armies Army has just posted a preview of his work-in-progress "greens" for new 15mm-scale miniature heads - this time with S.T.A.L.K.E.R-style gas masks! Perfect for post-apocalyptic conversions! 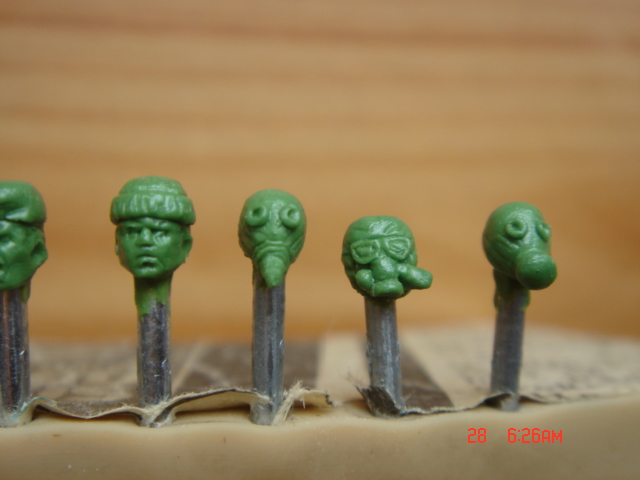 Head over to his the Armies Army Blog to read the good news!
Posted by Omer Golan-Joel at 11:51 AM 1 comment:

Now that one quarter of 2013 has already passed, in retrospect I think that I have wasted much of my free time on having too many thoughts at once, too many projects and too many ideas. Of course, I was also busy with the failing relationship with my ex-fiancée (we are no longer a couple, though she still remains a good friend), as well as my thesis dissertation (about town planning at the Bedouin town of Rahat in southern Israel), but I did lack a good focus to my free-time work, and thus did not accomplish as much hobby stuff as I would have liked to.

So I have decided to put everything in order and focus on the things that are most dear to my heart. This comes in addition to my wargaming terrain plans for April-June 2013.

Main Project:
My main focus will be on working on further titles for my commercial Traveller setting - Outer Veil - published by Spica Publishing. This means finishing writing the first two Ships of the Outer Veil books, the 'Mishka'-class Prospecting Craft and the Phobos-class Jump Fighter; once done, I'll move to further ships down the line, as well as a horror adventure set on a remote colony, and then get back to the Asteroid Mining Rig book.

Secondary Projects:
1) I want to get back to work on my setting for Stars Without Number, the Alkonost Sector, which will be published piecemeal through Infinite Stars. I want to finish the first instalment of Alkonost by the end of June 2013.

2) I want to continue working on my Adventurer Conqueror King System (ACKS) setting, Barbarian Conqueror King, in all its pulpy sword-and-sorcery glory.

3) I want to continue working on my USE ME wargaming titles, namely Twilight of the Empires Basic and Advanced (Colonial and WWI gaming) and Star Smuggler (space-opera skirmish).

That's all. Everything else - ACKS: The Dark Project, space-opera Traveller and a post-apocalyptic variant on Swords & Wizardry, tentatively called Frostburn - which is done in collaboration with Kelly "K-Slacker" Roberge of Tempora Mutantur fame - are on hiatus at least until USE ME TotE and USE ME Star Smuggler, as well as the first instalment of Alkonost, would be ready.
Posted by Omer Golan-Joel at 5:33 AM 2 comments:

In my Barbarian Conqueror King setting, the only playable non-human species are Lizardmen. With strong fighting (and predatory) instincts, a "level 0" Lizardman - anything from a dinosaur herder or coffee farmer to caravan guard or common Lizard-mercenary - fights and saves as a 1HD creature, i.e. as a Level 1 Fighter. Level 0 Lizardmen, however, are not trained in armour use (as they do possess good natural armour), and if they don any kind of armour except for shields (which they can use), they fight and save as Level 0 Humans.

If they gain Level 1, they may normally choose between Lizardman Hunter (the Hunter's skills grow from a Lizardman's predatory instincts) and Lizardman Warrior (then gain the warrior's totemic abilities - based on common Lizardman beliefs). To become Gladiators, they must have been specially bred and trained for that from birth; to become Priests Witch Doctors they need to become acolytes or apprentices of the appropriate class.

Young (up to the age of 10-12), old and infirm Lizardmen, on the other hand, are non-combatants, have 1d4 HP and fight and save as Level 0 Humans.
Posted by Omer Golan-Joel at 5:54 AM No comments: 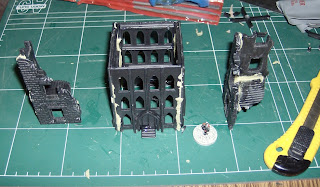 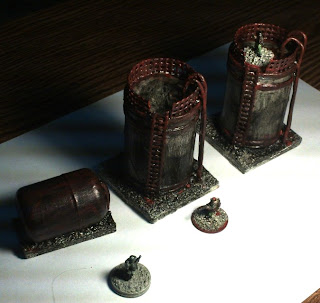 Now that I have a Campaign Map and Basic Demographics for my Barbarian Conqueror King setting, it's time to determine the basic characteristics of the great monarchs, despots and sorcerer-kings of the setting. Note, however, that since this setting is composed of relatively small islands of civilization - City States - within hostile wilderness, most rulers are rather low-level in comparison to more civilized campaign settings.

Also note that the barbaric lands of Enyom, Queddar and Mala lack high-level rulers; the highest-level characters are typically tribal chiefs or sheiks, and lack the personal power of the civilized rulers of much larger realms. If and when a high-level character will arise from these wild regions, chances are that he or she will unite the tribes under him or her and be a major power to be reckoned with - and, perhaps, a scourge of Civilization.

Yimara is ruled by King Balrazar, a Neutral level 11 Fighter.

Khishrom is ruled by King Adyan, a Lawful level 10 Fighter.

Irem is ruled by the Merchant-Prince Argum, a Neutral level 10 Venturer.

The City of the Crescent Sun is ruled by Lizard-Queen Xelana, a Lawful level 10 Lizardman Warrior.

The City of the Sunken Moon is ruled by Lizard-Sorceress Manatxu, a Chaotic level 10 Lizardman Witch-Doctor.

Cibola is ruled by High Priestess Nalana, a Lawful level 12 Lizardman Priest(ess).
Posted by Omer Golan-Joel at 4:45 AM No comments: