Why is System Shock one of the greatest masterpieces in computer gaming?

Many people regard System Shock, first released in 1994 on floppy disks and re-released in a remastered CDROM version with better graphics and full-audio logs, as an excellent and memorable game. It has also inspired generations of newer games, as well as a host of imitations and spiritual successors. Why is so? In this article, I will try to outline the three main factors contributing to System Shock’s success - persistent non-linear world; immersion; and an excellent villain. I will also discuss its spiritual successors, focusing on the Bioshock and S.T.A.L.K.E.R series.

What are the three primary factors in System Shock’s timeless excellence?

1. Persistent non-linear world. In System Shock, you explore Citadel Station, a ten-level space station in Saturn orbit. You do start on level 1, but from then on you slowly unlock access to the other levels. So far - similar to most spaceborne survival-horror games. But in Citadel Station, you do not simply progress in a linear fashion from one level to another. Instead, you go back and forth between the various levels as you pursue you protracted battle with SHODAN, the rogue AI in charge. You will find yourself revisiting the very same levels, re-exploring them, and in many cases unlocking more parts of them which were inaccessible before. Unlike many games, System Shock’s designers did not arrange Citadel Station in a convenient sequence of levels appropriate to the plot’s progression. Instead, facilities and objects exist where they should be on the station, and you will have to backtrack and reach them where they are. The world is persistent and non-linear - leave a stim-patch on the floor in the very first room you start in, and you can return many hours later all the way from - say - level 8 to that room and pick it up. You are absolutely free to explore any area you have unlocked in any order you desire. Citadel is not a stage set for a pre-determined plot. Instead, it is a place.

2. Immersion. System Shock’s designers effectively used the limited graphical and engine tools available in 1994 to create a masterpiece of technological horror. Everything in the game works to build that atmosphere and experience. The station is a metallic, highly technological, sterile space. It is also falling apart. From malfunctioning and blinking neon lights to metallic wall panels, from loose wires to computer screens filled with static - the place is dead and dying. Everything in the game is technological, from crewmembers turned into horrific cyborgs by SHODAN, through mutants she formed by genetically-engineered viruses, to your implants and weapons. There is no magic and very little vegetation outside the hellish hothouses of the three remaining Groves. Almost no one alive who is not a mutant or a cyborg. This is pure technological horror, the result of science gone rogue.

Another element of immersion is the sense of paranoia this game instills in its player from a very early stage. The levels are non-linear in their design, and monsters respawn. Furthermore, the designers carefully placed enemies, especially the completely silent Cyborg Assassins and Invisible Mutants, in hidden nooks and crannies on the various levels. Danger can come at any time and from any direction. You always dread what might be creeping up on you from behind. Or what hides in some cubby-hall high on the wall of some dark room. You are afraid. You feel hunted. You will never really clean out Citadel. You are never the master of Citadel Station. That honor belongs to SHODAN.

3. Villain. A very major factor in System Shock’s success is SHODAN, the rogue AI in control of Citadel Station. She pulls all strings. She is always around, from her digital face on malfunctioning computer screens through her pixelated visage when you try to access a keypad she controls - to actively trying to hunt you, the lone Hacker. You cannot escape her. Most of this is scripted of course but effectively shows SHODAN setting up ambushes and sometimes sending an army of cyborgs and robots to stop you. She also taunts you and even interrupts the e-mails you get from your friends on Earth. SHODAN also has multiple contingency plans towards the end of crushing the Hacker and bringing Humanity to its knees. A perfect villain.

System Shock’s success spawned a good number of games inspired by its mechanics, atmosphere, or even some of its themes - from Deus Ex to Dead Space. Here I will discuss two games inspired in such a way, and their comparison to System Shock.

The first is Bioshock - the official spiritual successor to System Shock - and its sequels. Bioshock, like System Shock, takes place in an abandoned and isolated technological location overrun by mutants and filled with dead people who left behind their audio logs. But here the similarity ends. Bioshock - in my humble opinion - failed to fully live up to the three factors I have described above.

First and foremost, its world is far more linear. Yes, you can walk around and explore a level. But once you finish a level, that’s it - you do not really come back. A level might be non-linear to a certain degree. The game itself is linear. This hurts Rapture’s sense of place and sets it as a series of locations conveniently stringed together in the order of the plot. Second, Bioshock’s overly-colorful art-deco world gets in the way of technological horror. Rapture is wonderful to behold - but this city, as well as many enemies residing in it, are more along the lines of grotesque monstrosity rather than the mind-numbing technological horror of Citadel. Combined with the magic inherent in the Plasmids, this reduces the game’s immersive focus. Finally, Bioshock’s villains do not repeat SHODAN’s success and hound the player far less. They are not everywhere. They do not really try to hunt you. They are not absolute masters of a domain in which you are a mere intruder.

The second is the S.T.A.L.K.E.R series, especially its most refined version - S.T.A.L.K.E.R: Call of Pripyat. Its setting is an open series of areas around Pripyat, the Ukraine - and not a space-station or underwater city. However, it did manage to live up to two factors of System Shock’s success. It does lack a clear villain unless you consider the Zone a “villain” of sorts. However, it has two other things - a persistent non-linear world and immersion.

S.T.A.L.K.E.R’s world is open. You might need to unlock some of the areas prior to entering them, but you do roam the Chernobyl Exclusion Zone quite freely, and you do backtrack in some cases. In Call of Pripyat, you do it very much - you eventually unlock three huge outdoor maps and can freely travel between all three once unlocked. You also move between them constantly as you pursue your military mission to find the fate of an expedition into the Zone’s very heart. Things in the Zone are where they should be; it is a place, not one long corridor used to tell a single plot. Furthermore, immersion is S.T.A.L.K.E.R’s biggest selling point. In place of System Shock’s technological horror, S.T.A.L.K.E.R provides an industrial post-apocalypse and carefully moves to build it up. The Zone is as sterile as Citadel. It lacks women, children, or old men. It lacks real homes as the Stalkers live in temporary shelters inside abandoned buildings, never rebuilding anything. It even lacks real food for the most part other than conserved foodstuffs brought from outside. There is life in the Zone, but it is mutated and inimical to Humanity. Inside the various bunkers under the Zone’s soil one can feel paranoia, maybe not as strong as that in System Shock, but enough to make you watch your back from mutants. Especially the invisible Bloodsuckers.

Repeating System Shock’s success is difficult. But System Shock itself will now be rebuilt, thanks to a Kickstarter campaign. The future looks “bright” - that is dark and horrible - for SHODAN!
Posted by Omer Golan-Joel at 3:38 AM No comments: 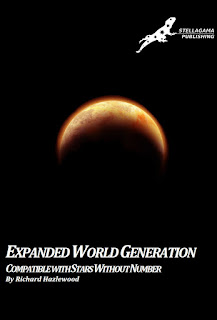 From the Ashes - 2d6 Sci-Fi OGL death and rebirth rules! 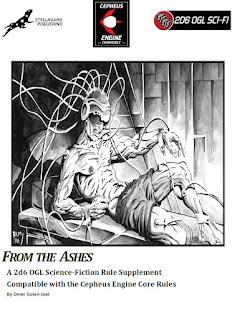 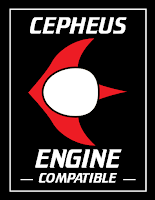 This product includes:
- Trauma surgery and recovering from deadly wounds - at a price!
- Less forgiving injury during character generation!
- Critical hits on personnel with gruesome effects!
- Cheat death by becoming a cyborg!
- Build yourself a new body with Bio-Regeneration!

Get it HERE!
Posted by Omer Golan-Joel at 8:51 AM No comments: