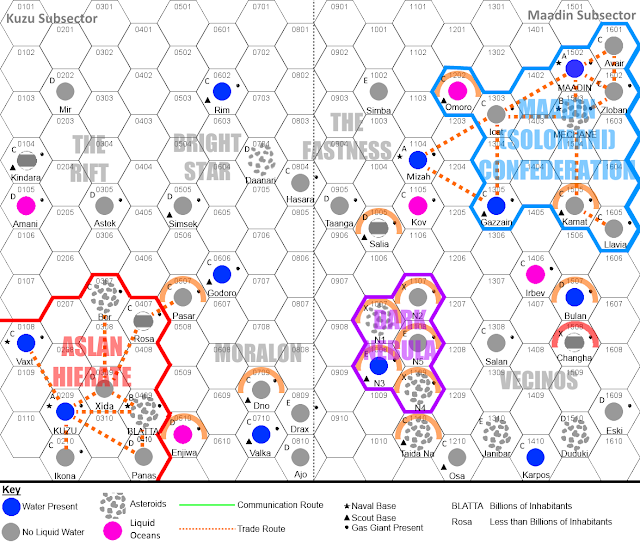 I have more or less completed the Dark Nebula astrography and map after re-reading the Aslan and Droyne alien modules. In addition to completing the starports and bases for all worlds, Aslan and Dryone included, I have also added trade routes.

Note that Mizah is the only Rich world in the Dark Nebula - I have downgraded its population to 8 so that there will be one Rich world on the map. It also fits my view of Mizah as an aristocratic "Casablanca" and neutral player better than an industrial world.

Also note that the trade routes are mostly within the two main polities. These are from Industrial worlds to Asteroid, Desert, Ice-Capped, and Non-Industrial worlds within 4 parsecs from them; and from the Rich world (Mizah) to the nearby agricultural world (Gazzain). I have also connected Mizah and Gazzain to the main Solomani trade network.

You can find the high-res map HERE and the world data HERE.
Posted by Omer Golan-Joel at 1:26 AM No comments: 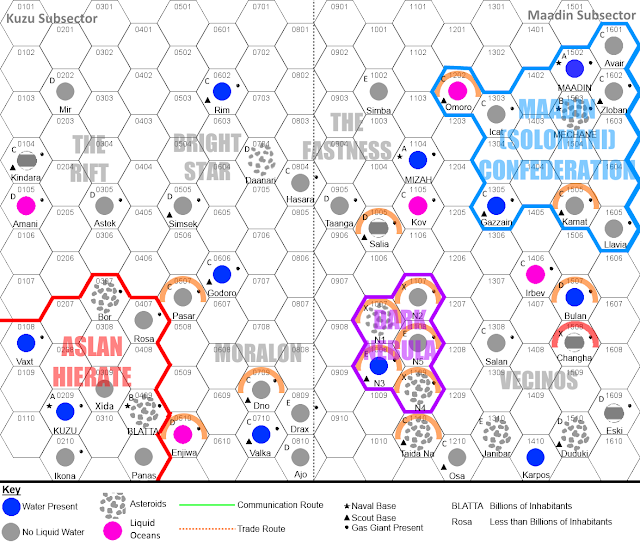 I have made some progress in developing the astrography of my Dark Nebula OTU variant. I rolled UWPs for most worlds, except for the Aslan worlds and a potential Droyne world (I want to re-read both alien modules before I roll these worlds). You can find them HERE. You can find the full-res map HERE. It appears that the Dark Nebula setting has a lot of hellholes and marginally habitable worlds - perfect for frontier adventuring. There are also several habitable worlds, of course, but most of space is alien and not necessarily hospitable. I also jotted down a few notes from the UWP generation process, which you can see in the linked spreadsheet.
Posted by Omer Golan-Joel at 5:02 AM 2 comments: 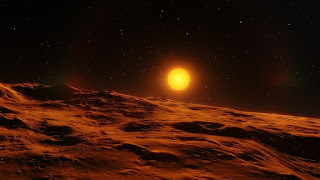 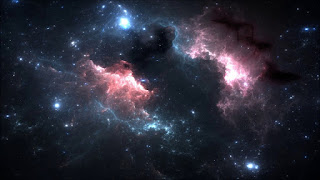 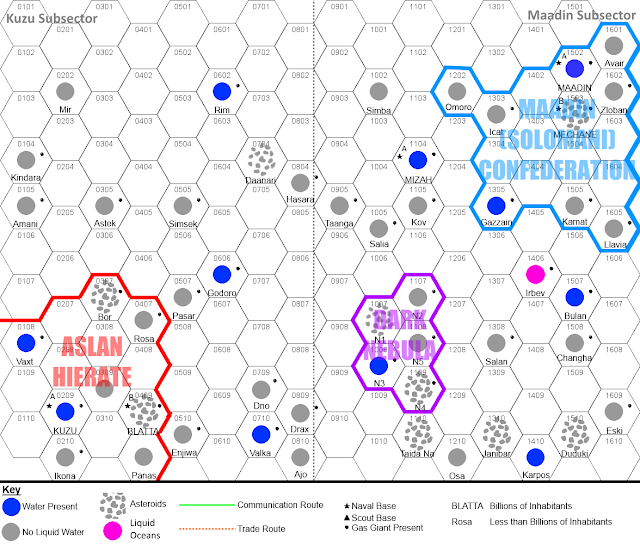 I've written much about the Dark Nebula, both in 2014 and in 2018. However, this setting evolved in the meantime, and it is high time to present a coherent, consolidated setting overview. I have also made some changes to the setting, reflected below.

Real-world work constrains permitting, I will continue developing this setting on this blog in the following days and weeks for your enjoyment and for my own (prospective) Solo game.

This is the darkest hour of Humanity.

The year is 2900 AD - later generations will call it -1619 Imperial. The 30th Century has just begun. The Long Night reigns for 157 years. The Rule of Man is no more. But on the frontier, far from the worst parts of the collapse, a new candle flickers in the dark. A candle at Maadin, an old colony of the Second Imperium. With its rise from the ashes of the old empire, it built a confederation of nine worlds - the new Maadin Confederation.

However, a new power arose to challenge the scattered human colonies of the Dark Nebula - a young alien species, proud Aslan. Entering the scene five centuries ago, the slowly rose from their homeworld to a union of several worlds - the Aslan Heir ate. Its Trailing expansion, however, encountered human resistance from the various pocket empires of the day, and thus most of its colonial efforts are to the Spinward. Cold peace endures between humans and Aslan, disturbed by brief periods of warfare.

But as the two polities maneuver in preparation for war, the stars of the Dark Nebula, long absent, have reappeared. Now, they are the key for victory - or possibly the doom of both prospective belligerents.

A Note on Canonicity
Dark Nebula is not canon. I repeat: it is not canon in any way. It is vaguely set in the OTU, but in a variant OTU. Specifically, I use material and even CT adventures in a way suiting this particular version of the setting, sometimes in ways which are very different than those of canon. That is, some adventures set in the Solomani Rim, the Spinward Marches, or Foreven are placed on this Dark Nebula map, and so are a few alien species, locations, and artifacts.
Posted by Omer Golan-Joel at 10:54 AM 5 comments: