A sorcerer blasting his enemies with the power of his mind. A muscled barbarian wielding a flaming sword against the local tyrant’s thugs. A secret cabal of magicians plotting to control the minds and souls of kings. A gladiator who freed himself from slavery wanders the land, righting wrongs and smashing villains. Big muscles, big swords, eldritch sorcery, powers of the mind, eldritch beasts. From Burroughs to Howard to Moorcock to Italian Peplum films to those dreaming of outlandish post-apocalyptic worlds, heroes raise swords against corrupt nobles, inexplicable sorcerers, and alien monstrosities.

Sword of Cepheus is a roleplaying game in the triple “Sword” genres: Sword and Sorcery, Sword and Planet, and Sword and Sandal. In Sword and Sorcery, often-amoral protagonists face vile sorcery and horrid beasts as they complete awesome adventures for gold and glory. In Sword and Planet, humans finding themselves on barbaric or decadent alien planets use their superior brawn and valiant hearts to win fame, fortune, and the heart of an alien princeling. In Sword and Sandal, often set in a quasi-Biblical or faux-Roman world, men and women with sharp wits and strong sword-arms fight mythological creatures and overthrow tyrants. The common threads of all three genres are the blade-wielding protagonists who use their brawn, as well as brains, to fight foes both supernatural and mundane and undertake hair-raising, violent adventures.

The Sword of Cepheus rules include everything you need to play thrilling sword & sorcery adventures:

See a sample from the book HERE!
Posted by Omer Golan-Joel at 12:00 AM 7 comments:

Sword of Cepheus to be released in two or three weeks! 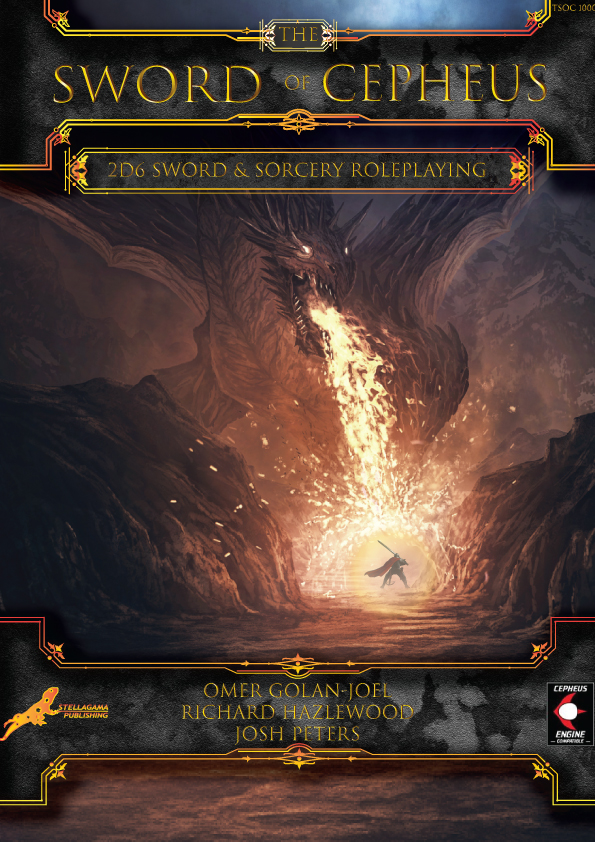