Coming July 1st from Stellagama Publishing: From the Ashes! 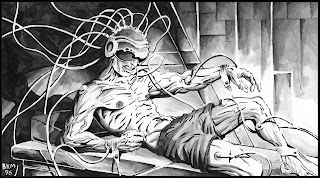 This product will include:
- Trauma surgery and recovering from deadly wounds - at a price!
- Less forgiving injury during character generation!
- Critical hits on personnel with gruesome effects!
- Cheat death by becoming a cyborg!
- Build yourself a new body with Bio-Regeneration!

100% compatible with the 2d6 Science-Fiction OGL Rules!
Posted by Omer Golan-Joel at 10:49 AM No comments: 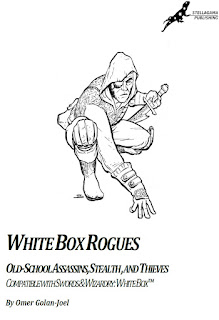 Gold glitters in the coffers of noblemen and in the hoards of dragons. Vast riches exchange hands in the bazaars of the city. Gems of untold value adorn the dead lying in their crypts. All of these, and more, call for the cunning merchant, or even the mighty swordsman, to take them by mercantile or martial prowess. They also call to the cutpurse, the burglar, the footpad – in short, their glitter summons the thief from the shadows, to lay their grubby hands on such fabulous treasures and take them, usually with their owners none the wiser. Similarly, the intrigues of nobles often devolve into cloak and dagger affairs, with emphasis on the dagger and the poison dart; into this world of conspiracy and deceit, steps the assassin, perhaps held on retainer by some corrupt noble to fell their rivals, or perhaps a murderer for hire.

Myth and legend, as well as more modern fantasy literature and even contemporary film and digital media, include – side by side with knights, wizards, and holy men – also thieves, rogues, and assassins. From Hermes the god of thieves (among other things) to the Merry Men who stole from the rich and gave to the poor, from a Halfling hired to burgle a dragon's den to a lone, cynical urban master-thief caught in schemes of ancient gods – the life of such criminals is a life of adventure, danger, and a potential to gain wealth beyond the lout's wild dreams. This product caters to this mythical and fantastic archetype by presenting an Assassin class and a Thief class to the Sword & Wizardry: White Box™ game, with additional expanded and clarified rules for stealth and for trafficking on the Black Market, as well as some of the tools of the trade of such outlaws and scoundrels.

GET IT HERE
Posted by Omer Golan-Joel at 8:30 AM No comments:

Coming this Summer from Stellagama Publishing: The Plague Ship!

Coming this August from Stellagama Publishing - The Plague Ship!

The Medium Transport “Koschei” silently hurtles through space at an odd trajectory, transmitting a garbled distress signal. Its engines are offline, its reactor in minimal power settings, and lights flicker erratically from its viewports. What has happened to the “Koschei”? From where did it jump, and why did it fall silent? The intrepid heroes – brave Star Marines, unlucky salvagers, or perhaps hapless colonists carried into cryo-storage on board the ship itself – will have to investigate this deadly mystery, laser in hand and with an eye always watching the corners. For the Plague Ship “Koshcei” bears dark horror, ready to corrupt and devour any who cross their paths with it.

This short horror adventure, designed for the White Star(TM) sci-fi role-playing game, is intended for 4-8 characters of levels 1-3, of varied classes. It confronts the player characters with alien horrors from stars unknown on board a derelict starship which once carried colonists to distant worlds, but which was infected and infested on the way. Prepare your trusty laser, and watch your back!

This is an adventure I really enjoy writing - horror, exploration, and colonial marines! What's not to like!

Stars Without Number version also in the works!
Posted by Omer Golan-Joel at 5:07 AM 2 comments:

I am pleased to announce Stellagama's Summer Sale - 25% off all Stellagama Publishing titles until June 17, 2016, to celebrate the summer! Enjoy our wonderful products, now at an excellent price!

COME AND VISIT OUR STORE!
Posted by Omer Golan-Joel at 4:42 AM No comments: