I am not ashamed anymore. 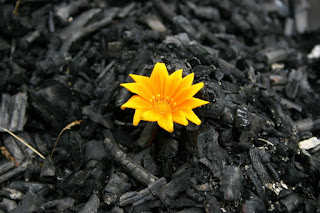 I have found out that one of the most important things you should work on when coping with mental health issues is on combatting your feeling of shame and guilt. Society tends to stigmatize such issues and cause the suffering person to feel shame.

I have Post-Traumatic Stress Disorder (PTSD) due to very nasty things which happened to me in my childhood. I am no longer ashamed of this condition. I did nothing wrong - wrong things were done to me by others. I am not guilty of anything. I have nothing to feel shame about. I survive, I function almost normally - this is something I should be proud of, given my past.

I no longer feel shame for having PTSD. I don't give a damn about any negative idea other people will have about it.

Some people might unfriend me on Facebook - I don't give a damn. I prefer friends with a capacity for compassion.

Prejudiced people might point and say "look at the madman" - I don't give a damn. They can wallow in their ignorance as long as they please.

Some potential employers might be discouraged to hire me - I don't give a damn. There are other people in the world with human hearts with whom I can work.

I am who I am. I have no shame in that. My suffering and my struggle to live on despite it is nothing to be ashamed of.﻿
Posted by Omer Golan-Joel at 9:59 AM 8 comments:

Once again on Classic Traveller skills

The question arises many times - what do Classic Traveller skills represent? How competent is my character? If he only has Vacc Suit-2 (for example) and no other skill, is he useful in gameplay?

I have written about this in the past, but I think that this warrants further discussion.

The first thing to remember is that Traveller characters are competent. Skill-1 is employable - you are good enough with it to get a paying job using this skill. Skill-3 is a professional - typically enough to get you a license in one of the Professions, such as being a Medical Doctor or a licensed Engineer. In ordinary situations, they do their jobs competently. Under CT rules, for example, First Aid and even Surgery for Severe Wounds do not require a roll - you got the paramedic (First Aid) or the surgeon (Surgery), you get results. They only need to roll dice when there is a significant chance of failure even for a professional, and when failure will have dire consequences. For example, if a doctor character would try to perform the above-mentioned surgery in some colonial hellhole when only the local TL-3 tools are available, and not in the default TL8+ Medlab.

Again- Skill-1 is enough to work at an actual, skilled job. Most people, both in real life and in Traveller, do not have too many such employable skills. Most of the things you do rarely go over Skill-1. As a typical person living in a modern, industrialized country, you probably have Ground Car-0 and Steward-0 if you know how to drive and cook/entertain guests, respectively. However, unless you have specific training, these would not be enough to work as a professional driver or a steward (or chef), respectively.

For example, I, the writer of this post, am a highly skilled and experienced Hebrew-English-Hebrew translator, as well as a skilled writer and game designer. I deal quite a lot with official documents. I can cook a decent meal and know my way around a car. I also have a good education and a Master's Degree in Geography. In Traveller terms, I will probably be:

Enough to earn a decent living while holding a quasi-professional job. Am I an adventurer? No. An adventurer will typically have different skills, for example, Gun Combat or Pilot or Vacc Suit instead of one or more of my skills. The number of skills, however, is quite typical. Someone with a good military career will usually have one or two additional skills. Of course, there are the rare elite soldiers who enjoy a meteoric rise through the ranks - the maximum is ten skill points at age 34, DOUBLE what a typical civilian like myself has. These are the officers with stellar careers who reach the rank of Commander or Lieutenant Colonel by the age of 34 - unlikely in real life even for a successful officer, and unlikely in Traveller as well. These people are exceptional, but most Traveller characters are not - this is a game about ordinary people doing wildly extraordinary things and going on hair-raising interstellar adventures.

Skills are a Big Deal in Classic Traveller. Pilot-1 alone can land you in a 6KCr/month job - very well-paying for a 22-years-old character. Medic-3 alone is enough for being a licensed physician, and with DEX 8+ you are actually a surgeon! Most people - even sci-fi heroes - will not have too many skills. The game mechanics also reflect this - on a 2d6 curve, DM +3 is a Big Deal, and skews things very far in your favor. Add to that Characteristics DMs, and a talented, skilled professional can be a highly successful expert.

But what about all the other adventuring stuff? you ask, If my character only has Vacc Suit-2 and Computer-1, what about combat skills? Driving a vehicle? Well, my friends, for this you have the Skill-0 rules. For starters, all Traveller adventures have Skill-0 in all common small arms. With a good gun at good range, especially with good Characteristics, they'll make very decent combatants even with Skill-0. With Vacc Suit-1, you can wear Combat Armor, and with Vacc Suit-2, you can wear a Battledress! As a Referee, I'd also assume Vacc Suit-0 and a Skill-0 in one Vehicle skill for the typical character. Most "passive" knowledge skills are subsumed in the EDU Characteristic. Finally, this is Old School - your character can do a whole load of "adventuring" stuff without having a specific skill listed on their character sheet.

An interesting sci-fi example comes from the Alien(s) movies. Ellen Ripley from was not a soldier and didn't really have good combat skills. At most, she has the usual Traveller Skill-0 in common weapons. In Alien, she killed the xenomorph without using a weapon by using her Pilot and Vacc Suit skills. In Aliens, she does shoot guns and throw grenades (Skill-0, right?) but her real kickass moment is when she uses her excellent Vacc Suit skill to slay the xenomorph queen with the industrial/loading equivalent of a Battledress.

Her Classic Traveller stats would probably look similar to this:

Another sci-fi example is Commander Shepard of Mass Effect fame. Canonically she*** is 29 years old at the beginning of Mass Effect, but to keep with Traveller character generation rules, I'd make her 34 years old - the earliest age you can reach the rank of Commander in the Navy. She is an N7 - an elite special forces soldier of the System Alliance Navy/Marines. In Traveller terms, she got Commissioned and Promoted on her first term and Promoted on each subsequent term. She is the poster-girl of the best you can achieve in the Navy in a stellar (so to speak) Naval career.

Her Classic Traveller stats would probably look similar to this - assuming the Infiltrator class I always play in Mass Effect 1:

On a final note, the above also explains why it is difficult to learn new skills in Classic Traveller. Learning a new employable trade - not to mention a full-blown profession - at a later stage of life is difficult. Possible, but difficult. Certainly, you can learn a new profession - Skill-2 - by taking a Sabbatical - once per lifetime. You can also vastly increase your Education Characteristics by up to six points through study. You can train new weapon skills, but this takes time, dedication, and effort to become permanent. You can also train skills - it takes 8 years to increase one of your skills by one level. This all makes sense in the context I have described above.