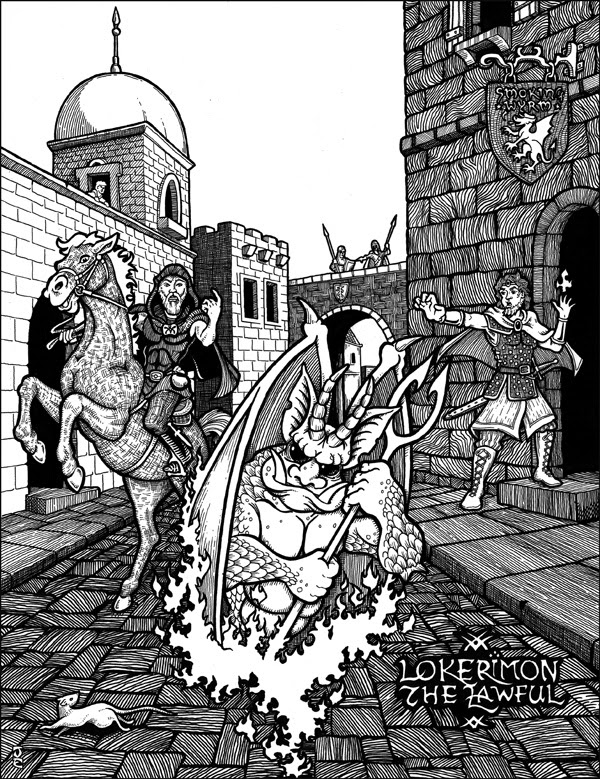 Much has been said about the difference between the old and new schools of Dungeons and Dragons and similar games. A good place to start looking into this subject would be Matthew Finch's Quick Primer for Old School Gaming which is available for free on LULU.COM. However, the more I play games of both schools, the more I think that the difference between them boils down to strategy vs. tactics. That is, seeing the whole dungeon, or, indeed, the whole campaign as a battlefield, as opposed to focusing on the specific combat encounter in one or another room.

New School D&D, exemplified by the 3rd, 3rd and a half and 4th editions, is tactical. It focuses much on what happens in the particular encounter, and gives the characters many options for making interesting tactical choices in it. The 4th edition goes so far as to focus nearly exclusively on encounter tactics, while providing relatively free-form options for the wider campaign. Furthermore, in the 4th edition, and to a lesser degree the 5th edition as well, many (if not all) of the characters' resources regenerate between encounters, removing a large chunk of the resource management portion of the game in order to facilitate the transition from one tactically-interesting encounter to the next.

The Old School such as that presented in the Original and B/X (or BECMI) editions of D&D, AD&D 1E and 2E and the many retro-clones such as ACKS, Swords & Wizardry and BFRPG, on the other hand, is all about strategy. Sure, combat can be very exciting and varied, and even tactical, but the core of the game does not focus on the particular combat encounter, but rather on the dungeon, or even the entire campaign world, as a whole battlefield. One key here is resource-management; your characters have limited hit-points, light sources, food and water, and even time itself is a valuable resource as light sources run out, food and water get consumes and there is the ever-present risk of wandering monster encounters if the characters spend too much time in a dangerous area (such as a dungeon). Strategy is important - a combat encounter can rob you of critical resources, and because monsters can cause permanent damage or even instant death, it is highly important to know when to enter a battle and how to enter the battle on your own conditions.

The same goes to "high-level" campaign play, which is relatively emphasized by old-school games and much less present in newer rulesets. The epitome of this are of course sandbox-oriented games such as ACKS and Stars Without Number where you actually have rules to build your own kingdom, empire or criminal syndicate. The idea is, again, that characters "play the world" and see it as their playground, rather than focusing on encounter-level tactics and abilities. So in an old-school game, the individual combat encounter is not the central focus of the game, but rather one of many strategic goals - one of many battles in a prolonged war, and in many cases the characters will choose to avoid that battle or to engage it in their own terms...
Posted by Omer Golan-Joel at 9:14 AM 2 comments: