On the Terran victory against the Reticulan Empire 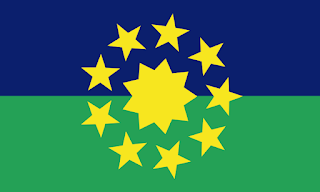 "Popular opinion in our Republic places the sole responsibility for our victory in the Terran Liberation War on the bravery of our soldiers, the cunning of our generals, and President Singh's unwavering leadership. As far as building our patriotic spirit goes, this view does a good job of uplifting our spirit and adding to our confidence. But history – as a science – must go far beyond such simplistic notions. Why did we, then, defeat the mighty Reticulan Empire?

Yes, our soldiers were brave, our generals were cunning, and President Singh was an excellent leader. But had we faced a united and spirited Reticulan war effort, we would have lost the war and our freedom. But we never faced such an enemy. The Reticulan Empire despite its theoretical might, has three major weaknesses in war: Reticulan culture, which is less conducive to warfare than the Terran one; the Chiwak threat; and the most significant one – the internal contradictions of the Reticulan empire and its centrifugal forces.

First, as a rule, Reticulans make brilliant strategists, mediocre tacticians, and poor soldiers. This has to do with their biology and evolutionary history but even more significantly with their cultural characteristics. Their heroes are scientists and engineers; since their antiquity, their leaders were always artisans and scholars, and not warriors. Reticulan rationality and keen intellect allow them to plot complex strategic plans – some of which will outshine the brilliance of some of the most outstanding achievements of historical human military thought. Once they set foot on the battlefield and go into the smaller scale of company-level combat, however, they lack the instincts and the socio-cultural constructs necessary for excellence at the face of the enemy. Humans and Cicek, on the other hand, excel at tactics and fight much better at the smaller scale. Reticulans try to compensate for this weakness – of which they know all too well – by employing highly mechanized warfare techniques, using warbots, and above all using auxiliaries from alien species adept at war. But in the trenches, Terran instincts give them an edge, and auxiliaries are easy targets for psychological warfare efforts aimed at fomenting revolt and desertion.

Second, the Chiwak are a constant military threat to the Reticulan Empire, for centuries or even for millennia. In terms of personal fighting prowess, these feathered predators are the direct opposite of the Reticulans: they are born and bred for war. Their Dominion – an aggressively expansionist theocracy – seeks to place the entire Reticulan empire under the clawed Chiwak foot. The Reticulans, enjoying superior technology, employ a good number of robots in their war against the Chiwak, and also make use of auxiliary troops on a massive basis. Indeed, under the Reticulan occupation, many humans served as ground troops fighting for the Reticulans and against the Dominion. Given the incessant threat of Chiwak invasion, the Empire could never divert its full resources to combatting the Terrans, lest the Chiwak notice the weakened forces on their border and launch a major offensive.

Third and most important, not all is well in the Reticulan Empire. It has a highly stable social structure, with an Empress on top, ruling over nine Great Houses, who in turn control the Gentry – who lord over the commoner masses. Below all of this, one may find the Client Species, granted a certain level of autonomy but each a subject and a vassal of one Reticulan Great House. Each Reticulan knows her place and her function almost from birth; the only avenue of social mobility is that of a Commoner climbing the social ladder to join the ranks of the Gentry, but beyond that, one's status is a matter of bloodline.

But this stability comes at a price. The worst weakness is that each Great House is a kingdom by itself, highly autonomous – and highly competitive with the other Great Houses. When House Thiragin's thralls – the Terrans – rose up in arms, the other Great Houses were content to let the Thiragin stew in their own pot, and lent little or no help to their ancestral rivals; and the Empress herself saw the revolt as House Thiragin's own problem, which does not concern the central Imperial government. By the time the other Great Houses and the Empress realized the threat posed by the Terrans to the entire Reticulan Empire, Terra has already built itself into a military machine to be reckoned with. Furthermore, the glass ceiling placed by hereditary nobility on social mobility caused many of the more talented Gentry and Commoners resent the Imperial system, where rulership was not determined by skill or merit, but by birth; thus, the Technocratic rebel movement began, and was quickly used by the Terrans as a weapon against the Reticulan war efforts. Finally, the Reticulans often abused and exploited their Client Species; given the opportunities opened by the Terran revolt, many of them – especially a good number of Cicek tribes – were quick to throw off the Imperial yoke and support Terra.

Thus, our great victory is not only the product of our merit as warriors but also of historical circumstances related to the late era of the Reticulan Empire."

(from the backstory of my Visions of Empire setting)
Posted by Omer Golan-Joel at 3:03 AM

Labels: settings, Stellagama Publishing, These Stars Are Ours!, Traveller, Visions of Empire