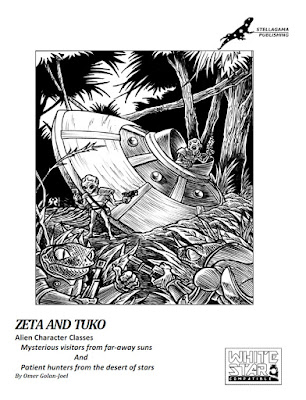 The second Stellagama Publishing product - Zeta and Tuko - is out! This is also for the White Star(TM) sci-fi RPG based on the Swords and Wizardry(TM) ruleset.

Here is the product's overview:

This supplement centers on two playable character class for White Star™ - the alien Zeta with her powers of mind and rational nature and the reptilian Tuko hunters with their ambushing and climbing abilities. Together with these species comes a list of Psionics – mental powers possessed by the Zeta, some of which are similar to Meditations and Gifts as given in the White Star™ core book, while others are more unique. Additionally, this supplement adds two new starships – the archetypal Flying Saucer and the stealthy Tuko Hunter – as well as a few weapons and tools used by these two mysterious alien species.

Grab it HERE!
Posted by Omer Golan-Joel at 2:23 PM