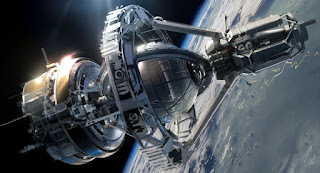 Here is a short historical background of my Hard Space setting.

History
World War III came about in the early 2040's, but luckily enough it did not materialize into the all-out nuclear armageddon feared by many. Instead, the war dragged on for over a decade, until all belligerents were bled dry and exhausted from the long war years. In 2053, the war was finally over, and the world was in ruins from prolonged conventional warfare and the few nuclear, chemical and biological weapons that did see use in the war.

All sides claimed victory but in reality, there were no victors - just bankrupt and impoverished nations incapable of conducting any further large-scale military operations. Politically, most governments emerged from the war in a very weakened state and had very little support from the war-weary population. The governments were mostly powerless to do anything meaningful to reconstruct the ruins of their nations; into this vacuum stepped the private sector, thrilled with the possibility of profit from reconstruction. Earth's collapsing nation-states no longer had the political power necessary to force taxes or regulations on the larger corporations, and these companies grew rapidly in size and power.

Bit by bit, the corporations rebuilt parts of Earth. Not all of it; not even most of it. But the corporate arcologies and gated cities provided their residents with the amenities of modern life, unlike the almost universal poverty of the urban blight surrounding them. Rising in profits, the private sector turned its eye to research and development, as well as the industrialization of the solar system. In the early 2060's, these efforts bore fruit and resulted in a rapid succession of innovations, from suspended animation to gravitic control, as well as improvements to the fusion power technology existing from before the war. In 2067, gravitic technology led to the greatest invention of all times - the faster-than-light Jump Drive, demonstrated by a historic month-long round-trip to Alpha Centauri by Zhang-Markov Industries's starship Zhen He. Very rapidly - some would say too rapidly - Iron Star Enterprises followed suit and launches their own exploratory starship, John Glenn, on an expedition to Barnard's Star. Thus began the first generation of space colonization.

Space is dangerous, and interstellar space more so. The first interstellar travellers found this the hard way, with high mortality rates among the early explorers who ran into deadly jump drive malfunctions, vicious alien wildlife - and soon enough, inter-corporate rivalry resulting in bloodshed. But mankind continued its march to the stars, despite the small size of interstellar ships allowed by the early jump drives. Colonies soon sprang out on planets orbiting Alpha Centauri, Barnard's Star, and Ross 154, as well as a small research outpost on a rockball in orbit around Luhman 16. With the development of more robust starship shipyards and thus a larger number of starships, the second wave of interstellar colonization in the early 2090's, colonizing seven new worlds, of them only one, orbiting Wolf 424, turned out to be a highly promising garden world, with the rest being more amenable to rare and exotic element mining.

The greatest discovery in the history of space flight came in 2099 when a detailed dig o the Cydonia region of Mars yielded weird alien artifacts after long years of rumors and strange accidents caused to spacecraft and ground vehicles in the vicinity of this region. While the Face of Mars turned out to be nothing but an oddly-shaped hill, the region itself appeared to be visited by extraterrestrial travellers - dubbed the "Visitors". They left behind unexplainable and deadly anomalies warping time and space, as well as a plethora of artifacts, the function of which was never fully discerned so far. Rumors of similar "Visitation Zones" on GL674 IVa and Ross 128 II were strongly denied by Iron Star and Zhang-Markov, respectively. In 2116, research into the alien artifacts and anomalies - while yet far from bringing about an understanding of the Visitors themselves, their purpose, or their civilization, gave scientists valuable insights into meta-dimensional physics and exotic matter, bringing about a new generation of magneto-gravitic and jump engines. These new engines, allowing both larger starships and longer travel ranges, opened up new frontiers to Humanity.

Today, in 2130, human space boasts 35 primary interstellar colonies. Most are very small in size, especially the remote ones, though Proxima Centauri III does serve as a home to almost a hundred thousand people. The frontier is wide open, and starships are "cheap" enough for smaller corporations and all sorts of social and religious movements to afford. Criminals, of course, can afford them as well, and piracy is a blight on the high frontier... This is a time for daring people to go out of the Sol system and seek their fortune among the stars, though many will find there not their fortune - but their untimely death.
Posted by Omer Golan-Joel at 9:15 AM