Here is a work-in-progress of the Terra Subsector for my Visions of Empire setting. The base data is similar to what I used to create Outer Veil six or seven years ago, but this is a new map, with its own data, and based solely on known near-Earth stars, with my extrapolations, "flatenning" or 3D real space into a traditional Traveller 2D hex grid and imagining what kind of worlds and gas giants would be found out there. Exectp for Terra (which should be named Sol after ist primary star), all star-names are real. Feel free to use this if you want a somewhat "realistic" near-Earth Traveller subsector.

This also allows me to extrapolate quite a lot about the Terran Liberation War. Reticulan Subsector Capital was at Keid, with strong local Reticulan colonies at Procyon, Kapteyn's Star and Epsilon Eridani. The old EFA (Earth Fedeal Administration - a client-state of the Reticulans) based on Terra had major colonies at Alpha Centauri, Tau Ceti,  Barnard's Star, Ross 154, 61 Cygni, and Epsilon Indi - and several other outposts; all of these were quickly taken into the new UTR (United Terran Republic) when we Terrans revolted against the Reticulan overlords.

As at TL13 (by the "Little Black Books 2" and 3 version of the Classic Traveller rules), maximum jump for serious naval combatants (1,000 tons and above) is Jump-3, in order to protect Mother Terra from significant Rericulan naval raids, the Terrans ahd to quickly seize Sirius and UV Ceti, which soon became major battlegrounds of the War. Since the mineral-rich Tau Ceti 5 was already an mining world with the highest colonial population outside the Sol system (approximately thirty million inhabitants), it became a major strategic asset and thus a major battleground as well - some sort of a "Stalingrad of the stars". Late war concentrated on Procyon and Epsilon Eridani, and the war culminated in the capture of Keid and the dethroning of the Reticulan House Thiragin. 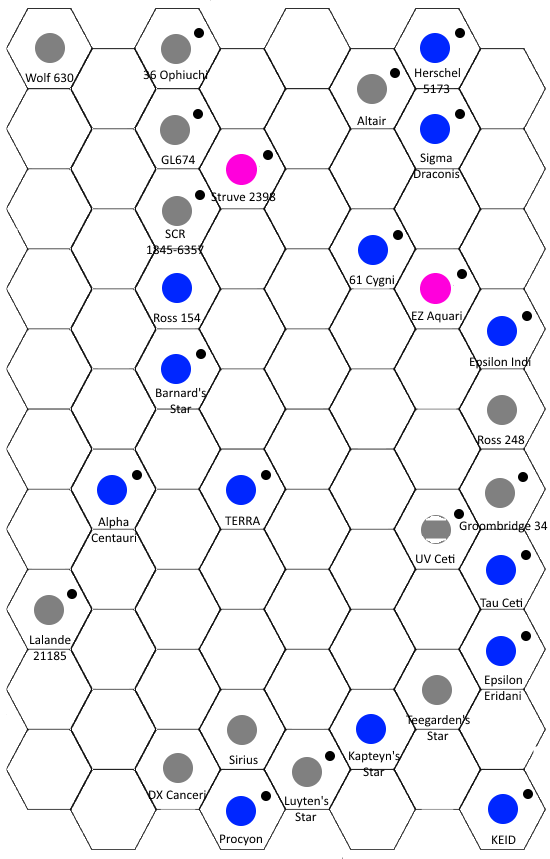