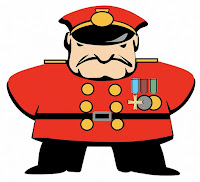 Thinking of my Dark Nebula setting for Classic Traveller, here is something I had in mind for characters with military backgrounds to make their ranks more interesting. While I am writing this with the militarist Maadin Confederation in mind, one may use such rules in any setting involving ranked military characters, such as those generated by Classic Traveller character generation.

People tend to treat military officers, including reserve or retired ones, with respect. The fact that a military force saw fit to promote someone says something about that person. In militarist societies, this goes even further, as the social elite often includes many high-ranking officers, active and retired alike.

This, of course, is not as universal as the Social Standing (SOC) characteristic. The latter represents connections, including family connections. In some places, it also represents one's social station in a more formal manner (such as castes or a feudal system). Despite the above, civilians do not always respect military veterans, and some may see "pulling rank" - requesting preferential treatment thanks to one's military rank - as faux pas.

In civilian or semi-civilian situations where characters try to get preferential treatment (above and beyond what their SOC signifies) due to military rank, use the following rules.

* The relevant skill depends on the situation at hand. Bureaucratic situations would call for Admin; high-society social occasions call for Carousing; diplomatic or commercial situations call for Liaison; and criminal (or similar) milieux call for Streetwise. For the sake of this throw, treat the character as having Skill-0 in the relevant skill - no "Unskilled" penalty applied to the roll.

Of course, if the character's original SOC score is higher than their rank's Apparent SOC, use the original one.

The effect lasts for the current scene. At the Referee's discretion, this may be a permanent effect towards certain NPCs impressed by the officer.

The above implies to ranked military careers in Traveller Little Black Book 1 or The Traveller Book: Army, Marines, and Navy. At the Referee's discretion, merchant ranks may serve here as well, especially in commercial situations.

When using Supplement 4: Citizens of the Imperium, eligible military careers include Sailors and Flyers. At the Referee's discretion, Diplomat or Bureaucrat ranks may apply as well. In certain criminal situations, a Pirate's rank may even apply!