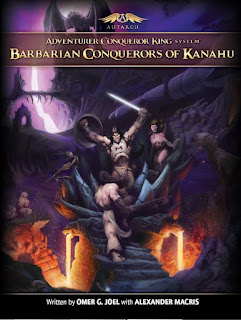 I have decided to run my next (PbP) ACKS game not my Elysian Empire setting but rather in my older, and published, Barbarian Conquerors of Kanahu setting. Why? because I find myself more inspired to use this setting, despite Elysia and Camalynn being fun to write as well; and because, well, I did more prep (70,000-word manuscript!) for this setting than for anything else I have written for a fantasy world. So I have so much stuff ready and at hand! Even a full adventure of my own writing, featuring Visitors! (which was published on the Autarch Patreon for backers of a certain level and above only).

I am using the default Harat region, with a twist: the game will take place 20 or so years before the default setting date. This will mean that the Sorcerer-King Nabu-Ram still rules Harat, challenged by rebelling slaves, led by the lizardman former gladiator Mazatel of Sitali. The rebels control certain eastern parts of Harat's former sphere of influence, and war rages. The game will not begin on the front lines, and the players may ignore much of the military action t, but, on the other hand, could dive right into it if they want. But the War will always be there in the background.

The catch - players start in rebel territory and most of the highest-level Divine spellcasters around work for the rebels and use the limited healing resource for the benefit of rebel leaders and heroes. So allying with the rebels (Lawful) might get you such Divine favor; but on the other hand, in the rebel territory, taxes are high to fund the War and the rebels are always short on cash. The Sorcerer-King (Chaotic) has deep pockets with which to reward mercenaries, even lower-level ones.

This will mean re-creating ruler NPCs, especially as some towns have new rebel rulers and some of loyalist rulers.

The centerpiece of the game, at least where the players start the game, will be Barrowmaze (by Greg Gillespie), which on my map is located in what was once in independent territory but is now under rebel rule. I'll have to adapt Barrowmaze's Helix to BCK's Gesher-Zur; NPC names and even races will have to change (no elves, dwarves, or halflings in BCK, but rather lizardmen, geckomen, and bugmen).

Should be great fun
Posted by Omer Golan-Joel at 1:18 AM