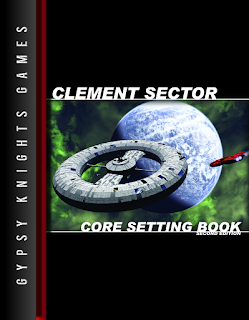 Reading through the Clement Sector book brings back fond memories. The author, John Watts, wrote a book in the spirit and general format of my old Outer Veil - my first published product. His setting is different, of course, but the overall atmosphere and product design are similar. Great minds think alike!

The Clement Sector is an independent setting for the Cepheus Engine, and by extension - for Traveller. It is set in a remote sector of the galaxy which was reachable from Earth only by means of a wormhole. The wormhole collapsed relatively recently, stranding the colonists on the far side of the galaxy. By its very nature, this sector is underdeveloped. Much of it is open frontier and a good amount of subsectors are either unsettled - some are even unexplored - or very sparsely inhabited. I like that - there is room for exploration and colonization and many, many lawless frontier worlds - perfect for adventuring.

I must say that love the setting’s grand vision and overall atmosphere - a wide-open frontier inhabited by people cut off from Earth and forced to fend for themselves.

However, the main weakness of the Clement Sector Core Book also lies in its setting. It describes sixteen subsectors - one full sector - with full star-maps and UWPs. However, it barely describes the worlds themselves. Similar to Classic Traveller’s S3: The Spinward Marches, it presents a few of them very briefly. The book does not describe most worlds and instead refers the reader to other products, costing $19.99 each. This would probably have been acceptable in the 1970’s or the early 1980’s, but when today’s gamer pays $19.99 for a setting core book, he often expects more than this. As a side note, this was one of the greatest weaknesses of my own Outer Veil, which had similar format even though I (very partially) covered for it by adding five Patrons and a short adventure.

A short introduction and 20 pages of setting history precede this expansive but rather empty astrography chapter. While it is a good read, for the most part it is of relatively little relevance to the setting itself - the politics of the 21st century United States have little effect on events set in the 23rd century on the other side of the galaxy. Sure, some of the states created by this crisis, such as Cascadia, did affect the setting, but I feel that two or three paragraphs, instead of a dozen pages, would have been sufficient for the history preceding the Clement Sector’s colonization.

The real value of this Core Book, however, lies in its massive character generation chapter. This is, in my opinion, one of the best treatments of 2d6 OGL or Cepheus Engine or Mongoose Traveller character generation. The chapter oozes color added to your character and ensures that each character will have a detailed and unique background. The chapter greatly expands on the regular character generation rules. It includes detailed tables to generate your character’s childhood and youth; a mind-boggling number of careers with d66 event tables and 2d6 mishap tables; and pre-enlistment options, again with their own event tables. There are homeworld skills tailored to the various Clement Sector colonies, but the Core Book does not describe their vast majority. However, it would be easy to replace those with homeworld skills for the planets of your own campaign. There are no known alien species in the setting (though there is some evidence of their existence), but humanity did “uplift” a number of animals, from dolphins to bears, and the book provides detailed rules for generating and playing members of these species (You can play a sentient, upright grizzly!) as well as genetically-modified humans. I must emphasize again - this chapter is amazing. You will also find it extremely easy to adapt it to any colonial sci-fi setting. The character generation chapter alone - which takes a whopping 45% of the book (!) - is well worth the $19.99 price of this product.

A few additional rules and a short discussion of technology in this setting follow the wonderful character generation section. There are quite good experience and character advancement rules and some alterations to the Cepheus Engine skill list. The technology section is relatively unremarkable except for the Zimm Drive - this setting’s Jump-2 Drive equivalent - and the Mindcomp. The former is very similar to a jump engine and could jump and distance up to two parsecs, with reduced transit time for closer destinations (e.g. 3.5 days to jump one parsec away), unlike the default Cepheus/Traveller J-Drive. The latter is a cybernetically-implanted computer, presented in a relatively interesting manner with its own unique rules and software. Oh, and there is a Handcomp which looks like a combination of the Pip Boy from Fallout and the Omnitool from Mass Effect!

The Clement Sector Core Book provides five setting-specific starships: a 300-ton Merchant, a 400-ton Yacht, a 300-ton Scout, a 800-ton Freighter, and a 1,200-ton Destroyer. The chapter does not provide TLs but all designs are seemingly TL11 and generally useable with whatever Traveller setting you prefer. All include excellent-quality deck plans and good renders. The merchant has an interesting design with a “saucer” lower deck and an engine nacelle/bridge section above and behind it (slightly reminiscent of the USS Enterprise of Star Trek fame); its lower deck does utilize its round shape for a less-orthodox radial layout. The Yacht is a traditional wedge and carries a 50-ton Cutter. The Scout is a round “flying saucer, but for some reason, its deck-plans, for the most part, fail to utilize its oval shape and instead opt for a rectangular layout surrounded by fuel. The freighter is excellent and interesting - an unstreamlined dispersed structure carrying six detachable cargo pods - a bit similar to the common freighters of Babylon 5 and Mass Effect. The destroyer is also top notch - a classical Babylon 5 or Halo elongated, unstreamlined design; it is also satisfyingly armed and armored with 8 points of armor, Meson bays, and Fusion bays - just as expected from a Traveller warship. The ship chapter concludes with a handy starship identification and size comparison diagram.

There are also handy, but mostly run-of-the-mill, starship operation rules, the highlight of which are wonderful wilderness fuelling mishap tables (applicable to almost any Traveller universe).

There is a short, 27-page setting information section at the end of the book - vastly dwarfed by the subsector charts and character generation rules. It presents seven corporations and four other organizations and only (!) four pages of setting politics. The corporate descriptions are mostly corporate history and contain a few good plot hooks. There is a Traveller's Aid Society equivalent (the Captain's Guild). The highlight of this chapter is a group called (surprise!) the Gypsy Knights who are "a group formed to travel across the colonized worlds helping those who are in need". There is also a religion/cult/terrorist organization called Solar Purity who are opposed to human presence on the Clement Sector side of the Conduit, or (in the case of moderates), preserve nature as far as possible. It reminds me of the "Reds" in Kim Stanley Robinson's Mars Trilogy; you can use them both as terroristic villains and as patrons hiring the PCs to protect this or that planet from human environmental destruction.

Politically, the Clement Sector is - for the most part - a collection of independent worlds. The only multi-world polity is six-world the Hub Federation. Unfortunately (from a Referee's standpoint), the Federation has an insular policy, missing the adventure opportunities presented by expansionism. The far more interesting (one-world) polity is Cascadia of the eponymous Cascadia Subsector, which has a strong interventionist and expansionist policy fuelled by a faith in "Manifest Destiny"; I would have preferred, though, that it would have had several colonies or at least vassal/client worlds for more interesting politics. There are also two new religions presented in this book - in addition to all the Terran faiths which came with humans to the Clement Sector; both present opportunities for conflict, especially the second one, Caxtonism, which is, in a nutshell, an expansionist proselyting cult.

There is a brief discussion of aliens in the Clement Sector. There are no known live aliens but the Terran colonists have found a few alien artifacts, hinting to alien life present somewhere in the universe. The big plot here is the Alien Research Network - ARN - a crackpot (or so people in the setting believe) group following various alien-related conspiracy theories. Still, the opportunities for serious xenoarchaeology are very limited in the canonical Clement Sector.

The book ends with a four-page discussion of possible campaign ideas. Most are typical Traveller ones - active military service, mercenaries, exploration, crime, trading and so on - but there are also plot hooks about working as a Gypsy Knight or trying to find the way back home despite the Conduit's collapse.

Visually, the book is very readable and well laid-out. All art - and there is plenty of art - is CGI, similar to Outer Veil. This is understandable, as color CGI is far more affordable than color hand-drawing, allowing the author to put more art into his book. The art is always relevant to the topic at hand and the book is very readable if a little ‘heavy’ on older tablets. All artwork and maps are excellently high-res.

The bottom line: An excellent character-generation book paired with a bare-bone frontier setting.