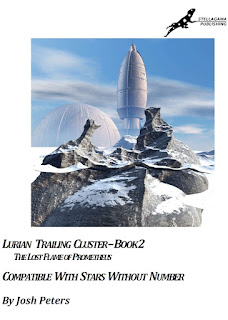 Recovering the Lost Flame of Prometheus is a major undertaking. Anyone backing an expedition like this would typically engage a group of highly professional individuals, dedicated to the singular goal of the advancement of human knowledge and the re-establishment of interstellar civilization in the Lurian Trailing Cluster.

Instead, a group of player characters will be mounting an expedition.

The mythical Flame of Prometheus, an immense data archive that contained all the knowledge of human civilization, was lost during the Deluge, centuries ago. Now that humans have begun to explore the systems of the Lurian Trailing Cluster, many are desperate to discover the fate of the Flame of Prometheus and locate its final resting place. In it, they might find the lost knowledge needed to rekindle interstellar civilization!

Lurian Trailing Cluster Book 2—The Lost Flame of Prometheus is a supplement designed for Stars Without Number, by Sine Nomine Publishing. It contains detailed descriptions of five new systems in the Lurian Trailing Cluster, complete with NPCs, new vehicles, starship designs and strange life forms. It also contains a full campaign outline for an expedition to locate the Lost Flame of Prometheus, including allies, enemies, monsters, encounters, facilities, and plots to drive a sector-changing treasure hunting adventure campaign.