Review: Caennai Class Merchantman by Out of my Mind Games 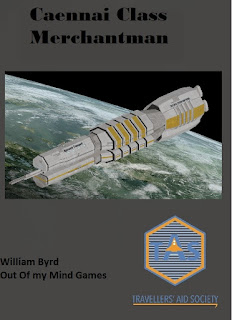 Caennai Class Merchantman is a ship book published for Mongoose Traveller, 2nd Edition, by Out of my Mind Games. It describes a 500-ton armed and armored merchantman capable of carrying an additional 250 tons in an externally-mounted cargo pod (for a total tonnage of 750 tons, which reduces drive performance). The purpose of this ship seems to be the secure transport of expensive (or dangerous!) cargos, or transport through dangerous space

The product provides full Traveller stats for the ship and its potential cargo pods, as well as deck plans and a render of the ship. The ship itself has an interesting design - an elongated, blocky design reminiscent of the Sulaco from Aliens or of the Earth starships from Babylon 5, as opposed to the vastly overused "wedge" shapes. This is a good, refreshing change. However, the author missed an opportunity to design a non-streamlined ship - and the ship does look unstreamlined in its render - with integral hangarage for interface craft. Instead, it can fly through an atmosphere but not really land (though it can hover over the ground by anti-gravity). I find this somewhat sad, as the Traveller deck plan market is flooded with streamlined ships and unstreamlined ones are much less common - and thus interesting.

Personally, as a Referee, I would have removed the streamlining and reduced the common area and the cargo bay a bit to fit in a Ship's Boat/

The deck plans are low-res and unlabeled. The product describes the general contents of each of the three decks below the deck plan itself, but the deck plan is not always clear - which is a shame as this ship is interesting in its design. The layout is very basic but readable.

The great thing about this product, however, is its cargo pod system - a welcome unorthodox feature of ship design. This also allows for all sorts of interesting uses, including using this ship for exploration with a large laboratory/sensor pod, for example. It can also mount a "Docking Jig" carrying small craft - and I'd bet that some creative captains would convert the entire cargo pod into a fighter bay for an instant carrier (or pirate "Battlewagon"!).

Other very good features include a fully-detailed sample ship with a full crew, good adventure seeds for using the ship in a campaign, and flavorful details about the ship itself.

The bottom line is that this is an interesting, though flawed, product. This ship can be an excellent addition to any Traveller campaign.