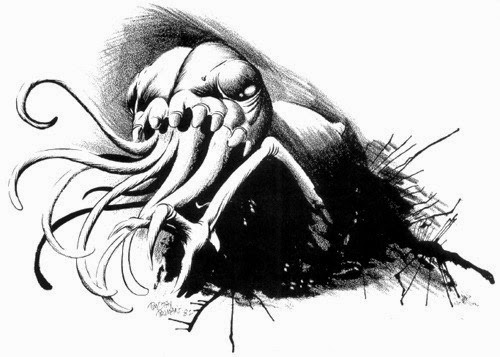 Like many life-forms native to the arid, cold, dusty world of Laana, the Tentacled Worm is exceedingly hardy and exhibits both insectoid and mollusk characteristics. This xenomorph is the apex scavenger of Laana, eating anything and everything, but rarely actively hunting. It prefers its meals dead, though it might act as an opportunistic predator if it detects easy prey. Since it can feed on virtually anything organic and biologically capable with humans, the Tentacled Worm quickly found its way to the trash-dumps and sewers of many worlds, its eggs inadvertently carried by many a merchant ship to different worlds. This creature looks like a combination between a grub and a cephalopod, 3 meters long and standing a meter high, with multiple legs carrying its weight and many tentacles surrounding its mouth.

The Tentacled Worm has two attacks which it may use in the same round: slapping its prey with its poisoned tentacles, or biting with its many sharp mouth-parts. The tentacles cause no damage, but on a successful hit, the target must make a Physical Effect save or be paralyzed by the venom for 2d4 rounds. The bite itself is handled as a normal attack and does 1d6 damage. It also enjoys a keen sense of smell used to located food, and it may attempt to detect sneaking foes by smell as if it has Perception-4. Note that this sense of smell does not usually allow it to detect non-organic targets.
Posted by Omer Golan-Joel at 12:15 AM