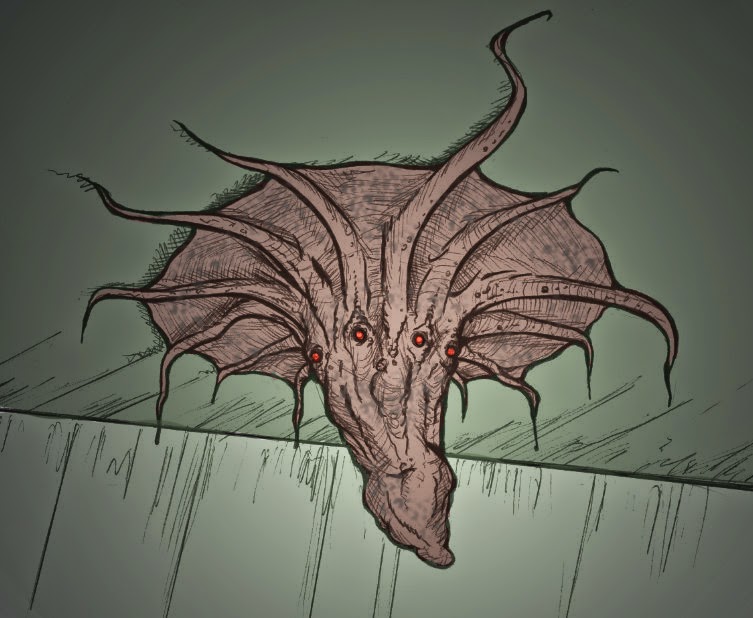 I hereby present a new feature of this blog - Monday Monster. Here I will provide xenomorphs for Stars Without Number, sometimes converted d20 SRD monsters, in other cases monsters out of my own imagination. Eventually I might even convert them over to Classic Traveller.

The Cave Squid is one of the larger predators on the dry, cold, dusty world of Laana. Exceedingly hardy like all native Laanese life-forms, the squid can weather the biting dry, cold air and filter out even the worst dust-storm, requires little water and may lie half-dormant for a long period in wait for prey. Its natural habitat are caves and rocky outcrops, from which it hangs in wait for prey; in modern times, it also has an annoying habit of infiltrating abandoned or seldom-used buildings, then attempting to eat anyone who tries to reclaim them. A hardy animal, the Cave Squid hitched a ride on many an unknowing freighter outbound from Laana, and by now they have adapted well to most "short-sleeve" and marginal environments in the sector as an invasive species.

The cave squid hangs from a ceiling - cave or building - by its muscular "foot" placed at the top of its body. When motionless, it can look like a stalactite, by holding its tentacles stiffly under itself, or like a lump of rock, spreading its tentacles so the membrane between them covers its body. Its shell and skin usually resemble limestone, though a cave squid can change its color to match almost any type of stony background. This how it ambushes prey - when a creature enters its cave (or abandoned building), A Cave Squid is about 120cm long from the tips of its tentacles to the top of its head and weights approximately 20kg. One the tough outer hide is peeled, the innards of this creature are much softer, and are considered a delicacy on Laana; in fact, in the more habitable parts of that world, Cave Squids have become quite rare, as during the hard years following Liberation, their flesh was a welcome change from the ubiquitous broad-beans and metawheat ration provided to all citizens.

The Cave Squid uses echolocation to detect its prey, and can thus "see" perfectly even in total darkness. When in hiding, noticing it requires a Perception check at difficulty 10 when not deliberately searching the area, and at difficulty 8 when deliberately searching; if the Cave Squid attacks an unsuspecting victim, it enjoys a free round of action when it can attack before initiative is rolled and the victims may act themselves. On a successful attack, roll an opposed Athletics check (modified by the character;s Strength modifier) between the victim and the Cave Squid (the Cave Squid has a total modifier of +4); if it wins the contest, it grapples its victim, immobilizing it. On each subsequent round, the victim is allowed another opposed Athletics check; if he fails, the Cave Squid may constrict him, doing an automatic 1d8 damage (the Cave Squid may roll to attack him as well as its standard action).
Posted by Omer Golan-Joel at 2:49 AM