Last week I posted dinosaur stats for Stars Without Number. Here are the same dinosaurs... With Classic Traveller stats!

A common dream of scientists and laymen alike, ever since the development of modern genetics in the second half of the 20th century, was bringing the beasts of the past to life, chiefly dinosaurs, massive reptiles who captured human imagination for many generations. Actual remnant DNA from Jurassic and Cretaceous fossil records, however, was greatly fragmentary in nature, preventing direct cloning of dinosaurs, as was initially proposed. So, for a long time, resurrecting dinosaurs remained a distant dream for many. But the development of advanced genetic engineering techniques during the late Rule of Man allowed for the creation of hybrid genomes, complementing the fragmentary fossil record with genetic material taken from the dinosaurs' living relatives, modern avians. This allowed for the creation of living, breathing dinosaurs, who might show various differences from their actual progenitor templates, but who were close enough to have a huge market among enthusiasts, terraformers, and colonists in search of interesting imported or cloned fauna. Several worlds thus had a certain population of these reptiles, and many still survive to the time of the Third Imperium. 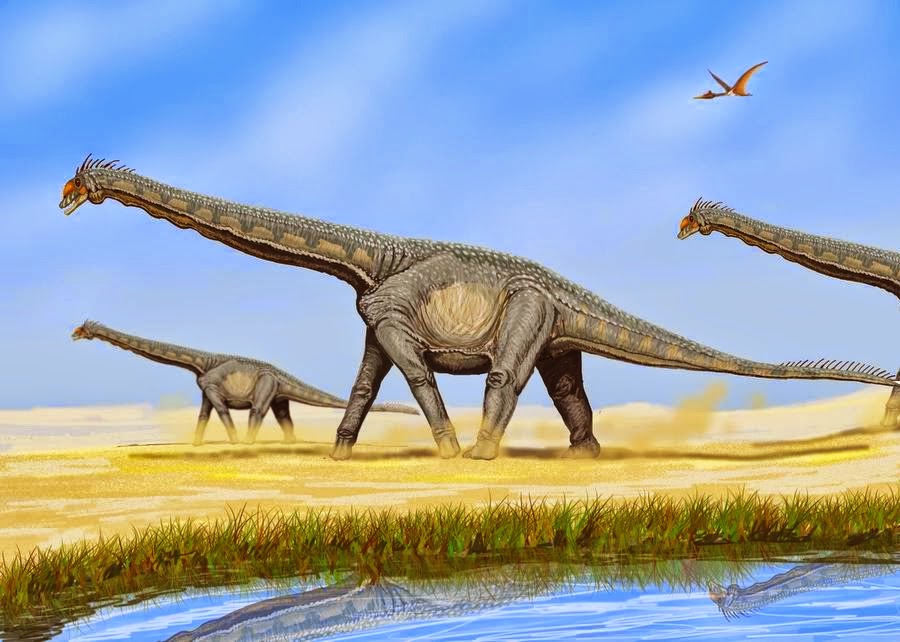 The Alamosaurus is an enormous sauropod herbivore, ranging up to 25m in length, with a shoulder height of 7m and a weight of approximately 30 tons. At this size, even Tyrannosauruses will hesitate to attack, unless the Alamosaurus is weak, or a youngster separated from its herd; when in a herd, virtually no predator will dare hunt this giant creature. An Alamosaurus, therefore, has little to fear from predators, and is rarely aggressive unless cornered, or unless defending its young. When it does attack, however, it uses its sheer weight to trample any smaller aggressor, and may damage vehicles as well, including armored ones. While some barbaric tribes on low-tech worlds tame Alamosauruses to serve as giant beasts of burden, their slow pace and non-aggressive nature make them ill-suited to use as war-beasts. 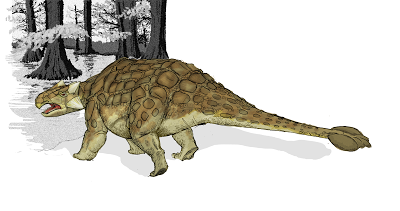 Armoured to the hilt with bony plates and armed with a massive club of a tail capable of crushing most predators, the Ankylosaurus has the abilities, as well as the necessary temper, to defend itself from any perceived threat. At the length of 10m and with a weight of 6 metric tons, this is a difficult, but rewarding, challenge for hunters, and its meat may feed an entire tribe of lost-worlers for a few days.This herbivorous dinosaur is quick to anger, and views most other creatures of human-size or larger as potential predators, hence to be minced with its crushing tail. A hit by the heavy, flail-like tail will knock a human-sized target prone on 7+ after a successful hit, unless the target wears battledress, in which case the chance is reduced to 9+. 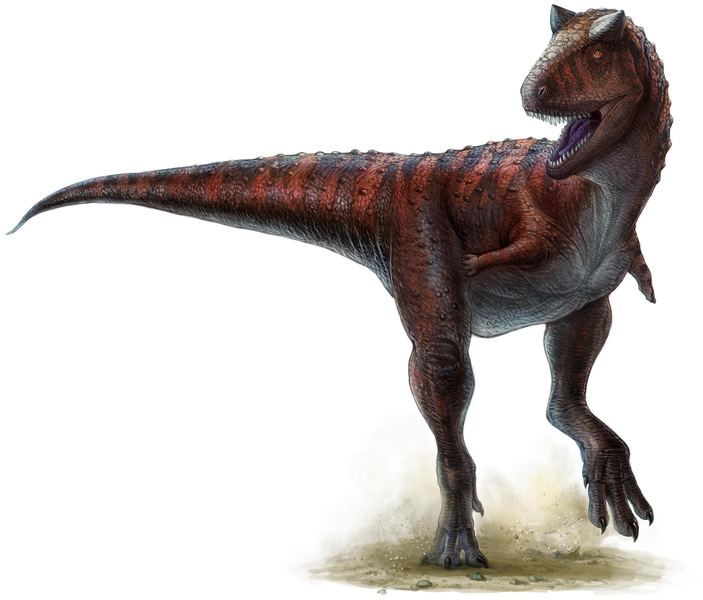 The Carnotaurus is a large, though lightly built, predatory theropod, specializing in ambushing its prey. With teeth like swords and a bite force eclipsing that of a large crocodile, a Carnotaurus hunts dinosaurs larger than itself, tearing their flesh with bestial ferocity. While lacking the bulk of larger predatory theropods, the Carnotaurus is capable of attaining impressive speed, attacking the prey from surprise. This dinosaur was actually much more common as an "exotic pet" of wealthy owners than the much more imposing Tyrannosaurus, owing to its lower meat intake and thus cheaper upkeep cost. 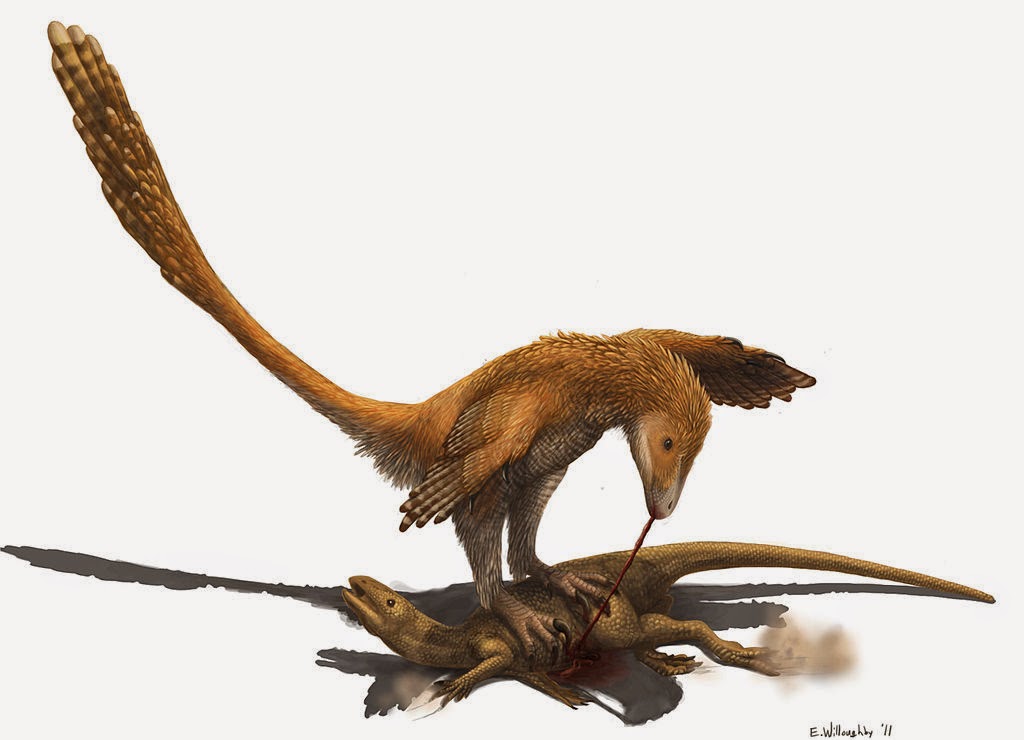 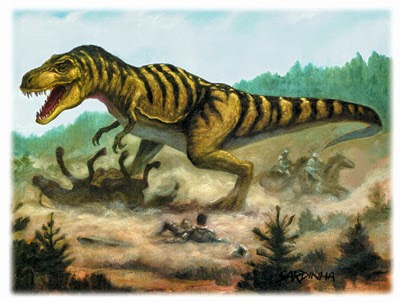 King of the dinosaurs, the Tyrannosaurus is a true monster, apex predator of its time, and now apex predator of the genetically-enhanced future. Massing up to seven tons, it outweighs many vehicles, and can exert massive force with its enormous jaws. Originally bred for the preserves of ultra-rich big-game hunters, it now stalks many worlds where the perimeter defending these preserves fell apart during and shortly after the beginning of the Long Night. On many lost worlds, this reptile is worshiped as a god. 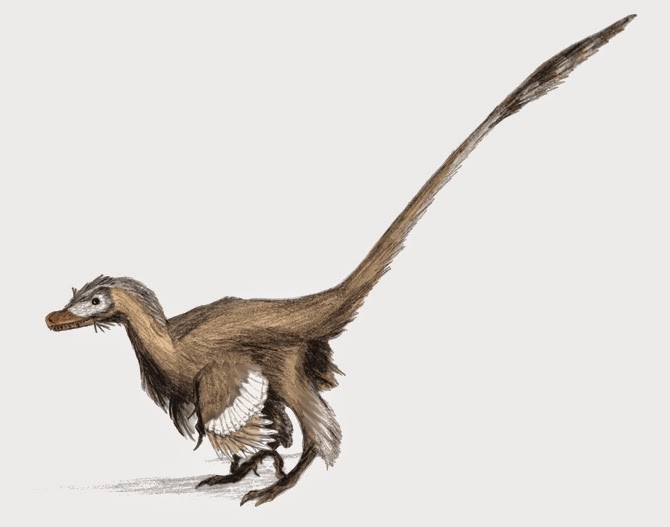 While its name is occasionally appropriated to describe the much larger Deinonychus, the Velociraptor is a small predatory theropod, rarely weighting over 15 kilograms. It enjoys a feathery tail (constituting most of its 2m length) and a full coat of feathers, and runs twice as fast as a typical human. Like its larger relative, the Velociraptor is a pack hunter, and a social animal, and is readily tamed - a common pet held on several worlds in lieu of dogs. A single Velociraptor is a nuisance; a hungry pack, on the other hand, could be very dangerous, particularly to a single victim.
Posted by Omer Golan-Joel at 2:12 AM