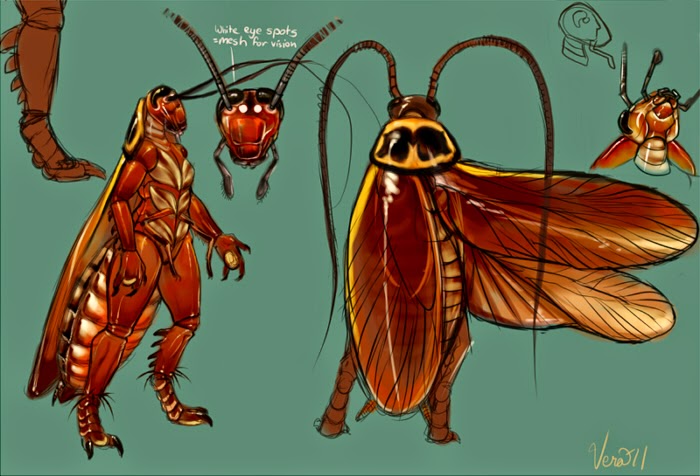 A relatively rare, though influential, sentient species in my Barbarian Conqueror King setting is the Bug-Men race. This upright insectoids do not resemble orderly hive-based social insects, as the typical sci-fi depiction of insectoid aliens usually is, but rather cockroaches: they are opportunistic to the extreme, resilient, shady and anarchic. A Nest-Mother may have much respect from the many males who frequent her nest to mate with her, but she does not have real command over them, nor does she gain a telepathic connection with any male. Typically, the males go around making dirty deals and selling suspicious artifacts, while the female builds her own nest and grows her own magical power, then devotes much resources to reproduction en-masse and may grow her own "hive of scum and villainy" with her own spawn. For the male, however, the pinnacle of life entails the hoarding of many trinkets, which may or may not have any value in the eyes of teh human onlooker.

Physically, a Bug-Man male resembles a 4' tall upright, slender, humanoid cockroach, walking on four legs and using two limbs for fine manipulation. It has multi-faceted eyes and a mouth with two mandibulae and two maxillae, as well as two antennae each 1' long projecting from its head. A female, however is much wider, and grows over time; she starts her adult life around the height of a male (though much wider) but, eventually, when she settles in a nest and becomes a Nest-Mother, reaches 6' in length and much mass. Bug-Men range from yellowish-brown through dark brown to black in color; their eyes are shiny black. Males lack wings; female have four wings and may fly, as described below.

Bug-Men thrive wherever there is an opportunity for commerce, subterfuge and infiltration. They excel in the criminal underworld, using their opportunistic nature and keen senses to strike shady deals with other sentients. They live in the shadows of civilization, living on its refuse. Thus, some Bug-Men are, ironically enough, Lawful - because, if civilization falls, so does its bounty and so do the many opportunities for success it offers. Many others are Neutral, but very few are Chaotic. Bug-Men usually worship the gods of Humans around them, though they are rarely devout, and much more interested in striking temporary deals with the divine rather than forming long-lasting relationships; they speak their own language, but also that of the Human society around them.

Note that Bug-Men classes take either Bug-Man 0 (males) or Bug-Man 2 (females); Bug-Man 1, 3 and 4 are included for the sake of completeness.

Requirements:
All Bugmen require a minimum Dexterity and Constitution of 9 or better.


Bug-Man 2 (XP Cost 800):  at Bug-Man 2, the character is a fully-blown Bug-Man female, and the will have the following four custom powers in addition to the above:

Experience Point Progression After 8th Level
Bug-Men increase the amount of experience required to gain each level after 8th by 25,000XP.
Posted by Omer Golan-Joel at 5:21 AM