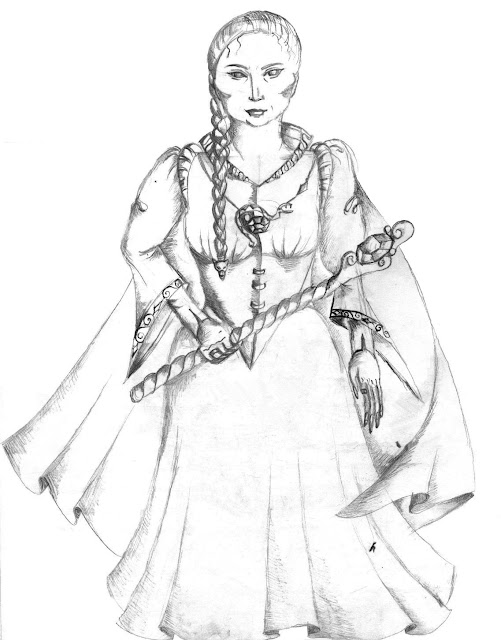 This is a Sword and Sorcery setting I have been toying with. I even sold this concept to my fiancee and we will play this campaign as a one-on-one game before trying our hands on ACKS: The Dark Project.

What is it? Barbarian Conqueror King (AKA Sword and Lizardry) is a setting for the Adventurer Conqueror King System (ACKS); it grew out of the discussion on Dragonsfoot. It is a lush land of vast jungles, deep swamps and searing deserts where the small city-states of Men and Lizardmen stand as isolated beacons of civilization while dinosaurs, giant insects and savage barbarians rampage in the untamed wilds outside these pockets of Law. Ancient ruins of dead Sakkara and older, deader empires lie ready for plunder, glistening with gold and artifacts - guarded by monstrosities from beyind the grave, savage beasts and the horrid minions of Chaos. Law-abiding Men and Lizardmen huddle behind cyclopean walls and pray to their gods while in the shadows of civilization and in the barbarity of the Wilds, degenerate cultists make human (and lizardman) sacrifices to their Cthonic gods. Civilization is often corrupt and weak, ripe for hardy barbarians, untainted (yet) by the sins of civilization, to conquer it with muscle and blades and forge new kingdoms out of the ruins of the old.

Setting Idea:A wet, tropical sword and sorcery setting with a strong focus on reptiles (dinosaurs, lizardmen, yuan-ti), insects, cthulhu-type "Outer Gods", city-states, a lot of abberations and less "typical" D&D-fantasy tropes (no Elves and Dwarves - just Men and Lizardmen). Technology is that of Antiquity, with a few advances towards the Early Medieval tech - and wonderous relics of the forgotten Human past hidden in deep tombs under dead Sakkara.Dinosaurs and their kin (as well as insects) replace mammals (except for Men, that is, and the Cats who came with them) both as wild beasts and domesticated enemies. Dinosaur Riders! Triceratops egg omletes! Random encounter with a T-Rex! Muscled barabrians smashing the rotten trappings of civilizations with two-handed swords!Think Carcosa but with more orthodox magic (and D&D-type magic items), a bit more hope, a bit less weirdness, somewhat less randomness - and more urban (city-states rather than villages) and technologically advanced.---History in four paragraphs:First were the Serpentmen, who worshipped terrible Cthonic gods. Their empire was forged in eons before the dawn of history and lasted for millennia. In search for slaves, they bred themselves with giant lizards to produce the hardy Lizardmen, and, for ages, lorded over the Lizardmen masses while constantly honing their blasphemous sorcery. But then, millennia before our time, the great goddess Ixchala revealed herself to a Lizardwoman known only as the Prophetess. With her Lawful divine inspiration, the Prophetess roused the Lizardmen masses in rebellion, shattering their chains of old and overthrowing their masters into oblivion. Freedom was won; and the great Lizard Empire arouse in the jungles, with the Matriarch ruling it with an iron fist from the top of the Great Pyramid in fabled Tollan.But then came Men, from across the sky, and their arrival upon a shooting star shattered the Lizard Empire. Men also arrived in disarray, and, at first, regressed to savage nomadism, sometimes used as slaves or mercenaries by the Lizardmen city-states which arose from the ashes of the Great Cataclysm. But some Lizardmen and many men, without the guidance of the old Lizard Empire's Matriarch, turned back to the dead gods of the Serpentmen, and their bloody rituals.Out of the chaos then rose Sakkara, the great Empire of Man. It grew upon the River of the Desert, worshipping Chaotic gods from beyond the grave and investing their resources in their immortal dead kings much more than in their living subjects. But even great Sakkara, after three thousand years, eventually stagnated and fell back into barbarism, leaving behind ruined temple-yards and ancient tombs filled with gold and peril, as well as the dying city of Zarnas, where the immortal Last Pharaoh rules, in name only, over his ruined empire.When Sakkara fell, its former vassals to the North, beyond the Great Desert and its River, won their freedom, establishing the new City-States, a mere shadow of Sakkara's old glory. Some worship the Lawful Gods of Man, while others pay homage to the blood-soaked idols of the long-dead Serpentmen. Meanwhile, the ancient Lizardmen Cities of the tropical South squabble and scheme, some worshipping the Lawful Ixchala, others following the dark Cthonic path of the Serpentmen gods of old.
Posted by Omer Golan-Joel at 3:55 AM