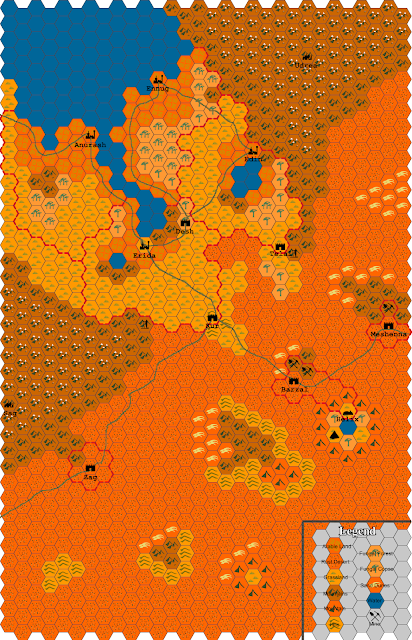 Full-Res Map
(scale: 1 hex = 6 miles)
I have recently posted the regional map draft for my Nibiru sword & planet setting. I have updated the map, adding a legend for the various terrain types; a few more sites; and domain borders for the various polities.

Telal is essentially Torus Tem - A fortress built by Edin as one of several to protect it from desert raiders. Now, half in ruins. Expect a nasty low-level dungeon in the nearby fungal forest.

Desh and Kur are fortified trade stations controlled by Erida.

Barzal is an independent fortified town on the Eastern Road, engaged in trade and mining, and so is Meshanna.

Udrea and Sag are Ancient ruins, up in the highland, where the cold is harsh and the air is thin.

Helix used to engage in mushroom-forestry but now gains much more from adventurers and the business they bring.