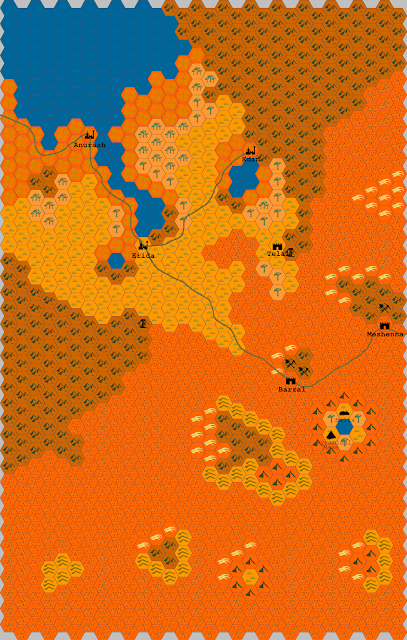 Full-res Map
I began designing the starting region for my  prospective Nibiru sword & planet campaign setting. So, without further ado, here is the regional map (scale: 1 hex = 6 miles) of the Scar's Maw region, opening up to the Rusted Sea desert.
Eirda, Anurash, and Edin are independent city-states.
Telal is essentially Torus Tem - A fortress built by Edin as one of several to protect it from desert raiders. Now, half in ruins. Expect a nasty low-level dungeon in the nearby fungal forest.

Barzal is an independent fortified town on the Eastern Road, engaged in trade and mining., and so is Meshanna.

Helix used to engage in mushroom-forestry but now gains much more from adventurers and the business they bring.
Posted by Omer Golan-Joel at 9:12 AM