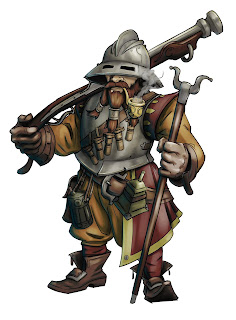 Automatons are the sole monopoly of the Machinist's Guild, which is Dwarven. They guard their technology jealously and enjoy legal protection in most human kingdoms and city-states. They also produce superb versions of technology known to Man, such as clocks and printing presses. A city's Dwarven Quarter, dominated by the Guild, is thus a technological wonder.
Posted by Omer Golan-Joel at 7:29 AM