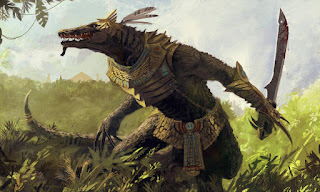 More on my Camalynn setting - and now more on lizardmen and anunaki. In 1534 BE (Before Elysia), the Eridan sorcerer-queen Beletseri, ruler of the city of Urun, desired tough, disciplined amphibious troops. She dreamed of conquering entire Erida and the neighboring lands. Since three rivers lie at Erida's heart, the Eridan heartland is swampy - where such troops will grant a significant advantage. Thus she cross-bred lizardmen with men to create lesser anunaki - reptilian soldiers combining lizardman resilience with human cunning and discipline. As their elite shock-troops, she cross-bred lesser anunaki with drakes (sub-sentient relatives of dragons) to create the winged greater anunaki capable of flight.

As things like this usually go, the anunaki soon rebelled, killed Beletseri, and embarked on their own campaign of conquest. They conquered Erida's heartland and extended their empire as far as Qedem. There they ruled with an iron fist for a millennium, until a successful slave rebellion in 470 BE returned Erida into human hands and slew most anunaki.

The remaining anunaki scattered; centuries of inbreeding between themselves, as well as breeding with swamp lizardmen, diluted their blood. Many degenerated into Chaotic lizardmen - twice as tough as ordinary lizardmen, cannibalistic, but lacking the cunning of a true anunaki. A few remained in secluded colonies. Chaotic lizardmen will see a lesser anunaki as a born king and a greater anunaki as a god. Ordinary lizardmen will view both as demons.