Lovecraftian Magic in Traveller and the Cepheus Engine - Initial Thoughts 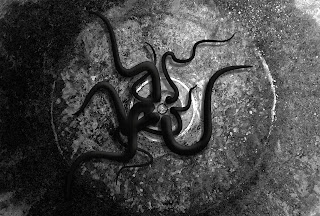 I am developing my own Lovecraftian magic system for use in Traveller and the Cepheus Engine. This will be especially useful with my Hard Space near-future, near-Earth Lovecraftian setting.

Yes, this means that even skilled sorcerers will sometimes fail in spellcasting - at least once in every 36 spells (on average - the chance of "snake eyes"). This is H.P. Lovecraft's legacy we're talking about here - not Dungeons & Dragons. Sorcerers do not cast powerful magic casually. They may use weak spells more often, as the risks of failure for them might be bearable, but no no one takes powerful summoning and necromantic magic lightly.

This, of course, leads to all sorts of sorcerous disasters (read: adventures), as - for example - some utterly unskilled fool is just bound to try casting that 6th Circle earth-shattering summoning spell, unleashing something horrid upon the local colony!

The above were just initial thoughts and ramblings. I'll write up a more coherent magic system later on.
Posted by Omer Golan-Joel at 1:31 PM