Dark Nebula: some musings and considerations

More musings and considerations of my variant-OTU Dark Nebula setting.

First, I would like to move the date two centuries back to 2900 AD (-1619 Imperial). This will make the Aslan Hierate even younger, as appropriate for a frontier setting. So this might have "30th Century Role-Playing" as a tag-line. In the Core - near Terra and Vland - this is still within the "twilight" years. However, at the high frontier such as the Dark Nebula, the Long Night has come earlier.

There is no direct contact with Terra for over a century. Contact was sporadic since the collapse of the 2740's (-1770's Imperial). It slowly declined; today, in the 2900's, it is rare for news to travel all the way from Terra to Maadin. Even when it does, it is indirect. The communications lines and trade routes are dead. Maadin and the other colonies had to fend for themselves for a century and a half. Even before that, distance from the Core forced them into partial autonomy.

The Aslan had a slow start. They were initially at TL9 in 2520 (-1999 Imperial). Since this setting has no empty-hex jumps, this means that they could only colonize the Aslan Main. This chain of stars extends to some distance to the Rimwars-Spinward from Ikona. Contact with the scattered Solomani colonies did not provide rapid technological advance due to their underdeveloped state; for years, the Aslan used native TL9-10 technology, supplemented by Jump-2 and Jump-3 ships purchased from Terrans. When they developed TL11 and large-scale native Jump-2 capabilities, they have already put their major colonial effort along the Aslan Main. Ihatei expeditions began raiding to the Trailing, but by that time the Solomani have developed to a degree which made such efforts difficult.

There were many border conflicts between Aslan and Solomani. Most were minor skirmishes between a band of ihatei and local Terran colonists. The exception was the Great Aslan War (Aslan call it the Solomani War) of 2771-2779. This gave birth to the (Maadin) Solomani Confederation as a mutual defense pact of the better-developed Terran worlds against the Aslan in the absence of help from the Core. The War ended in decisive, but bloody, Solomani victory. The result was the Mizah Accords. These forced the Aslan to withdraw from Enjiwa and Pasar and set the majority of both subsectors as a neutral zone. Definition of "neutral", however, was vague, especially as far as Aslan are concerned. So far, this seemed to hold as a "gentlemanly agreement", with both parties limiting the scale of military activity in the neutral zone to a reasonable level. There were two larger conflicts in 2813 and 2877, but these did not escalate into all-out war and things returned to normal afterwards.

Now the drums of war beat once more, this time with a new generation of aggressive ihatei maturing on Kuzu with thirst for conquest to the Trailing and an increasingly authoritarian and militarist Solomani government eager to meet this challenge with laser fire.

The 30th century Solomani Confederation is small - a mere 9 worlds - but united under a strong regime. The Aslan have many colonies to the Rimward-Spinward, but are split along clan lines and do not present a united force. The would-be belligerents are an ambitious Aslan clan (I'll choose or generate a name later) and its new generation of restless ihatei and the Solomani Confederation.

Maximum tech level is 12; military ships are capable of Jump-3. Most civilian Solomani ships have Jump-2 as the Solomani lack a Main going out of their space. Aslan civilian ships sometimes have Jump-1 and service the Aslan Main. Independent colonies tend to have lower TLs, but most of these are not very habitable and thus require some technology (often TL7) to survive.

There are Starport-A's only on three worlds: Maadin, Mizah, and Kuzu. There are a handful of Starport-B's as well. The rest is the high frontier.

As of the Dark Nebula itself, the stars within it disappeared 200 years ago, in 2686; then suddenly reappeared in 2898. They were colonized by a large research institute before the rest of the Maadin subsector, and are rumored to hold extremely high technology developed by that institute. However, there are far, far worse things there than renegade scientists... 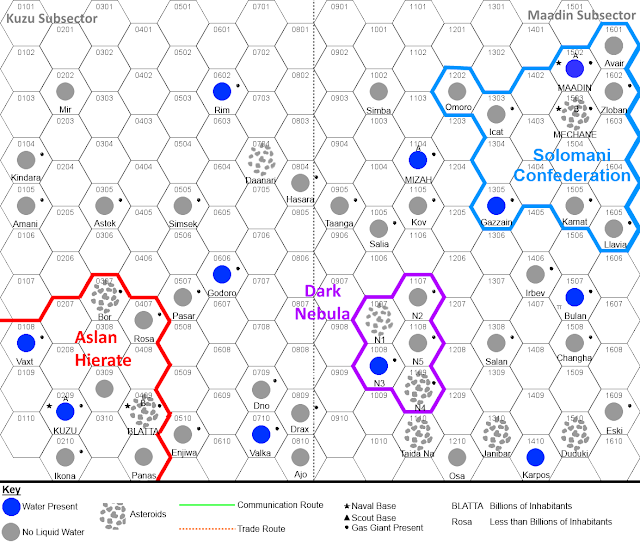