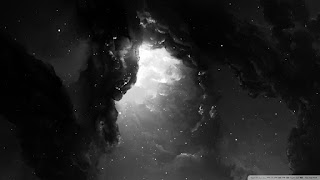 Following a discussion online, I think I will go with the Dark Night for my Dark Nebula OTU variant, just as Andy Slack did. There are three reasons for this.

The first is that it appears that the Dark Nebula board game takes place during the Aslan Border Wars (-1118 to 380 Imperial, 3399 to 4898 AD) - or before them - most likely before the Imperial era, as it depicts a Solomani rather than an Imperial human faction. The small size of the Aslan(ic) Hierate on the Dark Nebula board game maps, near seemingly frontier neutral space, also hints at an early stage in Aslan interstellar colonization.

The second is to give me more freedom of play in this setting, most likely as a Solo game, by toning down the Space Nazi aspect of the Classic Era Solomani Confederation. The Classic Era Solomani make great villains, as in the Argon Gambit adventure of Classic Traveller fame, but a totalitarian or semi-totalitarian regime would yield itself to quite a specific type of game, while making other game-play styles more difficult to carry out. I can still have various elements of this regime present in my game, as I see aggressive authoritarianism - though not necessarily totalitarianism - as a thread going through Solomani history. Unlike the Vilani, who love a stable, placid state of affairs, Solomani value entrepreneurship - both private and governmental - in the economy and an aggressive push forward in the political sphere. The Interstellar Wars between the Terran Confederation and the Ziru Sirka accentuated these tendencies, as did the tragically heroic attempts to keep the ramshackle Second Imperium together. The Classic Era Confederation did not arise in vacuum.

The third is to allow a frontier. In the well-developed Classic Era, I'd expect thorough development of space within a few jumps from the Aslan homeworld of Kuzu, as given in the Dark Nebula. Even secondary and tertiary colonies will benefit from centuries of trade and development. This is especially true due to the trade routes between Aslan and Solomani. Trade brings prosperity, and prosperity tends to expand beyond the trade routes themselves. However, a century or three after the Aslan first reached to the stars, near collapsed Terran space, would present a frontier. The Aslan, hungry for land holdings, would eventually come into conflict with the less-collapsed Solomani worlds. Reverse-engineering Solomani technology, they will eventually rise to challenge the local Solomani pocket empire. Still, between the two pocket empires - the nascent Aslan Hierate and the resurgent Solomani Confederation (centered on Maadin) - a wide frontier will still exist, slowly developing as the two polities make their play.

These are the darkest years of Humanity.

The year is 3100 AD - later generations will call it -1419 Imperial. The 32nd Century has just begun.The Long Night reigns for 357 years. The Rule of Man is no more. But on the frontier, far from the worst parts of the collapse, a new candle flickers in the dark. A candle at Maadin, an old colony of the Second Imperium. With its rise from the ashes of the old empire, it built a confederation of nine worlds - the new Solomani Confederation, a name used by several successor states of the Second Imperium, and later to be used by the Classic Era Solomani state.

However, a new power arose to challenge the scattered human colonies of the Dark Nebula - a young alien species, proud Aslan. Entering the scene five centuries ago, the slowly rose from their homeworld to a union of several worlds - the Aslan Hierate. Its Trailing expansion, however, encountered human resistance from the various pocket empires of the day, and thus most of its colonial efforts are to the Spinward. Cold peace endures between humans and Aslan, distured by brief periods of warfare.

But as the two polities maneuver in preparation for war, the stars of the Dark Nebula, long absent, have reappeared. Now, they are the key for victory - or possibly the doom of both prospective belligerents.
Posted by Omer Golan-Joel at 2:17 AM