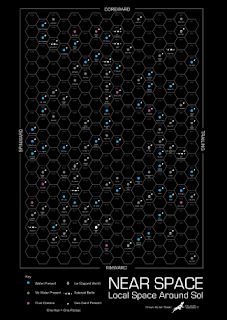 A common convention in (modern-day) Traveller and similar sci-fi RPGs using jump-drives and a hexagon star-map is that you can jump into "empty" hexes on the map and jump out of them, given enough fuel. Older incarnations of these games allowed jumps only between hexes containing a "world" (that is, a star with planets).

In this regard, one thing I was recently thinking about is that there are certain advantages to ruling out empty hex jumps. If you can jump into an empty star-map hex, then jump again to another system, you can essentially reach almost any star with almost any starship with enough drop tanks or inflatable fuel tanks - as well as extended life-support supplies. This makes space "flat" - crossing a 3-parsec "mini-rift" with your Free Trader is simply a matter of preparation and giving up some of your cargo space.

However, when you rule that you need a gravity well - that is, a star's mass - for the jump-drive to "focus" on, this changes things - now space has a "topography". In real-world (or fantasy world) planetside geography, you can't just travel anywhere in a straight line, at least if you move on the ground or sail on bodies of water. There are mountains and rivers, forests and bogs - in many cases, you will take a longer route to circumvent such an obstacle and not simply go straight through it. The same goes to jump-travel across a star-map where you cannot jump into "empty" hexes. Your Jump-1 Free Trader will have to take longer routes to reach worlds at a 2-parsec or wider gap from it; some worlds will simply be inaccessible to it as only a Jump-2 or higher ship can reach them. Even your trusty Jump-2 Scout will have to take detours around Jump-3 or wider gaps and there will be a few worlds only an advanced (and expensive) higher-Jump ship could reach.

This makes space interesting. There are various implications. First, it makes high-jump ships much more important - if your empire has Jump-3 while its rival has only Jump-2, you might be able to circumvent even its best-planned border defences and simply Jump over them. If you want to hide something, find a world accessible only by Jump-3 or higher and most civilians will simply be unable to reach it; go behind a Jump-4 or Jump-5 rift, and almost no one could get there. Trade and colonisation will develop along certain routes. Empires will fortify certain worlds, made strategic as they provide the sole access points into the empire using the rival's best Jump-drives. The empires themselves will develop along Jump-1 Mains allowing low-cost transport and develop much slower across Jump-3 or higher gaps.

This makes things interesting and makes space less "flat". I like that.
Posted by Omer Golan-Joel at 9:15 AM