Review of Ships of the Galaxy: Vegas-class Light Freighter 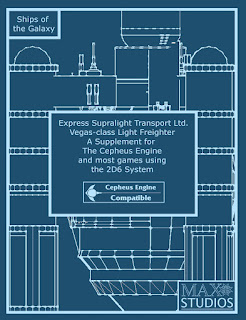 I was kindly given a complimentary copy of Ships of the Galaxy: Vegas-class Light Freighter by Blue Max Studios. Here is my review of this product.

There are literally dozens of sci-fi and space-opera trader-ship designs floating around the Internet, both commercial and fan-made. The Vegas-class Light Freighter does stand out among them. Why? Because unlike the large number of "aircraft-type" trader-ship designs with the engines at their "back wall", the Vegas is a "tail-sitter" - it's engines are under the "floor". The entire ship layout is thus unique among its many competitors, as its deck plans and overall structure are very interesting and a refreshing change.

This book describes a 300-ton trader-ship for the 2d6 Sci-Fi OGL/Cepheus Engine/Mongoose Traveller sci-fi rules. It includes all the regular material - ship stats and deck descriptions. However, it also features an economic analysis of the design showing how it will be profitable when ferrying cargo and passengers even without speculative trade. It also has some very nice "fluff" allegedly written by the "Skipper" - a "professional" stowaway of sorts.

The book features 3D renders of the ship and its nine decks from an isometric POV. It also comes with a booklet providing more traditional top-down 2D deck-plans. The author has obviously made the art and deck-plans with a relatively simple 3D modelling program, and they are not as "slick" as those in other ship-books, but the design itself is, as I have said above, very interesting and would be enjoyable for players to explore.

I have several minor criticisms of this product:

1) The page background sometimes makes the text slightly difficult to read. It is still readable, but a paler background would probably make it better.

2) The table on p.2 - which is repeated in the deckplan booklet - has some irregular alignment of its text.

3) The Asimov quote on p.5 and decks 02 and 00 of the deckplan booklet are slightly pixelated and blurred.

The Bottom Line:
If this was a "regular" trader-ship book with an "aircraft-type" layout, I would have given it a score of 3/5. However, the design's uniqueness and coolness factor warrants a 5/5. Highly recommended for adding some variety to the star-traders of your sci-fi campaign.