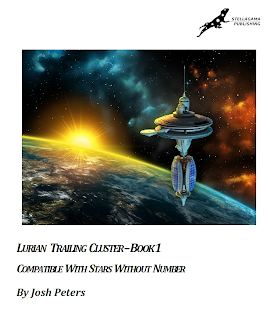 The waters of the Deluge have receded.
We have survived.
Now, we must reclaim our birthright: the stars.

The Lurian Trailing Cluster was once a remote frontier, settled by misfits, renegades, and anyone desperate enough for a second chance on a distant world. Now, six centuries after the cataclysmic Deluge wrought untold destruction on civilization, the worlds of the Cluster are clawing their way back into space. But among the untold riches to be found in the heavens lie dangers too terrible to contemplate. Only the bravest and boldest adventurers can possibly survive the trials that await humanity in the stars.

The Lurian Trailing Cluster Book 1 is a science fiction setting designed for Stars Without Number, by Sine Nomine Publishing. In this product you will find a brief history of the Cluster, as well as summaries for all fourteen of its worlds, faction data, and star maps. Three worlds are given fully detailed write-ups, including system and planetary data, trade tables, maps, and societal histories.

New setting for Stars Without Number - coming September 2016 from Stellagama Publishing!
Posted by Omer Golan-Joel at 10:52 AM