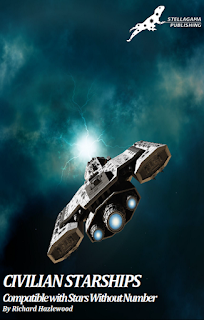 Compatible with Stars Without Number!

The Stars Without Number(TM) science fiction role-playing game has a wonderfully simple starship design process based on installing Fittings into a few standard hull types, but the books lack a comprehensive list of basic ship designs for quick use by a GM or players. Given the assumed setting of most SWN games, it isn’t surprising that standard ship designs would not be common. Each world or small interstellar state would most likely have unique designs that meet their unique needs. However, we have found that it is often a lot easier to have some basic designs to start with that can be modified to fit a given situation rather than designing each ship from scratch every time. There are essentially no civilian designs for starships for SWN. This product hopes to help solve this problem.

During the design of these civilian ships, there were several additional Fittings that we felt would have helped us, so below the designs you will find a list of new Fittings, aimed at Civilian ships such as would be used by player characters. This product also details six “standard” ship designs created using the core rulebook and the Skyward Steel supplement, both available from SineNomine Publishing; additionally, there are six ship designs including new Fittings defined in this publication.