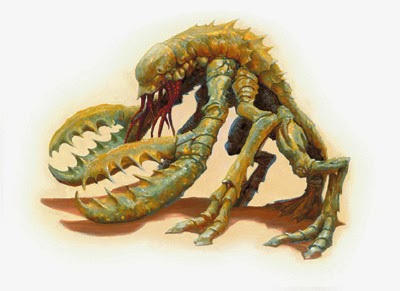 Engineered in some arcane pre-Scream laboratory as a living amphibious tank, the Chuul is a horrible mix of crustacean, insect, and serpent. After a laboratory accident allowed several of these creatures to sneak into the local waterways, it has later spread to several other worlds even before the Scream came. This abomination lurks submerged or partially submerged in murky water, awaiting for prey to devour. Although amphibious, Chuuls are not good swimmers and actually prefer to be on land or in very shallow water when they attack. A Chuul is about 3m and weighs 650kg and prefers to wait by the shore, submerged in murky water, until it hears nearby prey (in or out of the water) that it can attack with surprise. Chuuls may live indefinitely on land and under water and are immune to most known poisons and diseases.

The Chuul grabs with its claws and constricts its foe, then passes the opponent to its paralytic tentacles. It tries to always have one claw free, so if it faces a large number of opponents, it drops a paralyzed or dead victim and continues attempting to grab, constrict, and paralyze the rest. On a successful hit by a Chuul's claw, it is also able to constrict a victim for an additional 3d6 points of damage. The constriction continues on subsequent rounds. The hold may be broken on a roll of 2 or less on 1d6 (add the victim’s Strength bonus to the range, so a Strength of 16 would allow for the character to free himself from the dread Chuul on a roll of 3 or less); breaking the hold takes a full round.

A victim grabbed by the Chuul's claw are also grasped by its tentacles, which exude a paralytic secretion. Anyone held in the tentacles must each round save vs. physical effect on the Chuul’s turn or be paralyzed for the next round. While held in the tentacles, paralyzed or not, a victim automatically takes 1d8 points of additional damage each round from the creature’s mandibles.
Posted by Omer Golan-Joel at 10:41 AM